Famagusta 10°
clear sky
BUSINESS EDUCATION ENTERTAINMENT HEALTH POLITICS SCIENCE SPORTS TECHNOLOGY
10:22 Four Benefits of Hiring a Dedicated Development Team
04:48 Mark Kelly, President of Safety Marking Inc., Discusses Structuring Effective...
17:58 Trump wants to play golf at the Biden swearing-in in Scotland - but is...
17:54 First doubts Regarding tightened Steps: two National Countries Extract...
10:39 Covid-19 : in France, the end of containment and entry into force of the...
04:34 The schools of Rome will use the Internet with light bulbs: what it is...
10:58 Kratom Tea: How Is It?
11:46 Office Furniture Products for you!
12:17 Top Clubs, Their Value, Revenue And Current Standings
11:14 Reasons Why Rewarding Yourself is a Good Practice
BIST
1524
GOLD
439.288
USD
7.4448
GPB
10.1627
EUR
9.0064
Breaking News
Why Do We Prefer to Game on Our Smartphones?
Close 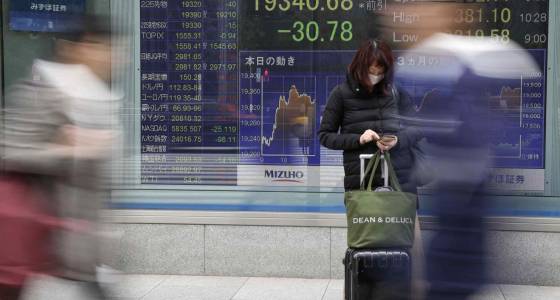 The blue-chip Dow average has risen for 10 days in a row. Other major indexes are mixed this week.

BONDS: Bond prices sank again. The yield on the 10-year Treasury note slid to 2.31 percent from 2.39 percent. Lower bond yields push interest rates lower, which means banks will make less money on mortgages and other loans. Wells Fargo slipped 93 cents, or 1.6 percent, to $57.56 and Bank of America fell 34 cents, or 1.4 percent, to $24.24. Investment banks and insurers traded lower as well.

With yields down, investors bought phone company and utility stocks, which pay large dividends similar to bonds. AT&T rose 29 cents to $42.24 and American Electric Power gained $1.01, or 1.5 percent, to $67.02.

HPE HURTING: Hewlett Packard Enterprise, which sells data-center hardware and other commercial tech gear to big organizations, slumped after cutting its profit estimate for the year. It named several problems including the strong dollar, expenses, and other problems that it said will be “near-term.” The company’s quarterly sales dropped 10 percent and weren’t as strong as analysts hoped. Its stock skidded $1.95, or 7.9 percent, to $22.71.

METAL GAINS: Gold and silver continued to rise. Gold, which jumped 1.5 percent a day earlier, picked up 0.4 percent to $1,256 an ounce. The metal is trading at its highest price since just after the presidential election, although it’s down sharply from this summer. Silver added 1.2 percent, to $18.34 an ounce and copper inched higher after a steep loss the previous day. That helped mining companies trade higher.

PENNY IN FOR A POUNDING: Department store operator J.C. Penney said it will close 130 to 140 stores and two distribution centers in the next few months. That’s about 14 percent of its stores. Penney also said it will offer voluntary early retirement plans to about 6,000 employees. The company is trying to cut costs as it competes with online retailers. Its stock gave up 57 cents, or 8.3 percent, to $6.29.

Competitor Nordstrom jumped after it disclosed a better-than-expected quarterly profit with help from strong sales online and at Nordstrom Rack. Its shares gained $2.41, or 5.5 percent, to $46.35. Kohl’s also rose $1.67, or 4.1 percent, to $42.58. The stock fell 2 percent Thursday after investors weren’t thrilled by the company’s fourth-quarter report.

The companies operate detention facilities used by Immigration and Customs enforcement as well as prisons and they get about half their revenue from contracts with the federal government. Their stocks have soared since Donald Trump was elected president in November. Investors expected the Obama-era policy would be reversed and that Trump’s policies toward immigration and criminal justice would strengthen their business. CoreCivic has climbed 140 percent since the election and Geo Group has doubled in value.

ENERGY: Benchmark U.S. crude oil fell 38 cents to $54.07 a barrel. Brent crude, the standard for pricing international oils, fell 44 cents to $56.38 a barrel in London. Energy companies continued to trade lower. They’ve fallen sharply over the last month. The S&P 500 energy company index is down more than 6 percent this year while the broader S&P is up 5.5 percent.