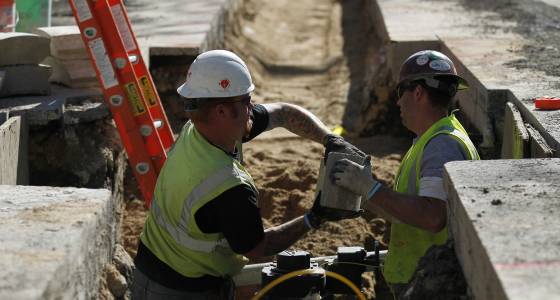 The Illinois Commerce Commission voted unanimously Wednesday to gather more information and hold more hearings on the program, which has been widely criticized as mismanaged and too costly. The company received legislative approval in 2013 to charge customers for the program on their gas bills.

The 20-year program would replace 2,000 miles of aging pipe in Chicago. It was launched in 2011 with a $2.6 billion price tag and has seen cost estimates balloon to more than $8 billion, though Peoples Gas CEO Charles Matthews later lowered the projected cost to $6.8 billion. Few opponents were calmed by the lower price.

After hearing additional arguments and evidence, the ICC will then "issue an order that will set the course, direction and pace" of the project, called the Peoples Gas System Modernization Project, ICC spokeswoman Marianne Manko said in an emailed statement.

One of the project's opponents, the Citizens Utility Board, sees some optimism in the regulators' order.

"We think it's a positive sign," Citizens Utility Board Executive Director David Kolata said. "Obviously, there's still a lot of work to be done, and we still have problems. This is really on an unsustainable path."

A state regulatory agency released a damning report Wednesday that found Peoples Gas has mismanaged its multibillion-dollar program to replace aging pipes under Chicago streets, pointing to large delays and budget overruns that could lead to significantly higher bills for customers.

A state regulatory agency released a damning report Wednesday that found Peoples Gas has mismanaged its multibillion-dollar program to replace aging pipes under Chicago streets, pointing to large delays and budget overruns that could lead to significantly higher bills for customers.

Wisconsin Energy, now WEC Energy Group, inherited the project when it acquired Peoples Gas in 2015. The program has been plagued by delays and charges of mismanagement.

Illinois Attorney General Lisa Madigan is among the project's critics. She has conducted investigations into the program.

Last year, Peoples Gas agreed to pay $18.5 million to settle charges from the attorney general's office and the ICC that the utility misled customers about the cost of its gas pipe program. The ICC launched a separate investigation of the program in July.

Peoples Gas, which has installed hundreds of miles of new pipeline since 2011, said in an emailed statement that it has made improvements in implementing its program.

"The benefits of the program will result in Chicagoans receiving the safe, reliable and modern natural gas distribution system they deserve," according to the statement. "We're happy to be responsive to the additional information the ICC has requested."