SeaWorld attendance and revenue continued their downward slide during the final quarter of 2016, even as the economic picture brightened at its San Diego and San Antonio parks, the company reported Tuesday.Across its 12 parks, SeaWorld Entertainment... 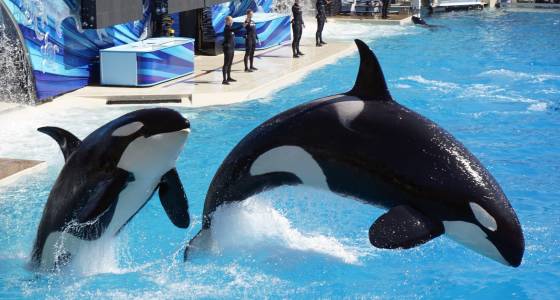 SeaWorld attendance and revenue continued their downward slide during the final quarter of 2016, even as the economic picture brightened at its San Diego and San Antonio parks, the company reported Tuesday.

Across its 12 parks, SeaWorld Entertainment generated revenue of $267.6 million, down slightly from $267.9 million during the same quarter a year earlier. Although 30,000 fewer people visited all SeaWorld parks over the last three months of 2016 compared with the fourth quarter of 2015, attendance was up at the California and Texas parks, chief executive Joel Manby said.

“While California and Texas trends improved, the Florida market, in both Tampa and Orlando, was challenging in 2016 due in part to a decline in Latin America attendance,” Manby said in an early morning earnings call. “I would note that while the decline in attendance from Latin America is moderating, recovery from that region will take several years, a view shared by our competitors.”

In addition to the continuing drop-off in visitors from Brazil that has dogged SeaWorld’s Florida parks in past quarters, the company blamed the overall attendance decline at its theme and water parks on Hurricane Matthew, which shut down Orlando parks for more than a day in October.

For all of 2016, 471,000 fewer people visited the parks, a 2.1 percent drop driven largely by declining visitation at the company's Florida and Northeast park locations. The numbers were largely offset by growing visitation in Texas and flat attendance in San Diego, executives said.

The latest financials weren’t a total surprise, given that SeaWorld had reported last week that revenues and attendance would be down for 2016.

Over the last year, SeaWorld has taken a number of steps to improve financial performance, including a cost-cutting plan that is supposed to yield a net savings of $40 million by the end of 2018.

Elimination of 320 jobs companywide late last year, including 60 at the San Diego park, should yield $10 million or more in savings, company executives said. In the near term, though, the cuts cost the company $8.9 million in severance and other related costs.

As part of its effort to trim expenses, SeaWorld also is trying to refinance its debt.

Manby reiterated that the company remains focused on containing costs over the next year.

“Our five-point plan and our path forward are very clear,” he told analysts. “And we are moving with urgency on all fronts.”

Manby reminded analysts that the company is still in the midst of reinventing its brand. Last year, it responded to its harshest critics by announcing that it would end all breeding of orcas and that it would replace its longstanding theatrical Shamu show with an orca encounter showcasing the animals' natural behaviors in the wild. San Diego will be the first park to debut that attraction, starting this summer.

People for the Ethical Treatment of Animals used the occasion of the earnings release to once again call for the release of SeaWorld’s orcas into seaside sanctuaries.

“It knows that its orca prisons are failing, and its only hope of staying afloat lies with PETA's shareholder resolution calling for seaside sanctuaries for the animals who have suffered in tiny concrete tanks for far too long,” PETA Executive Vice President Tracy Reiman said in a statement.

The company noted that the San Diego park saw a slight decline in attendance following the final One Ocean show in early January, prompting SeaWorld to step up its marketing in the Los Angeles area to remind people that a new, improved orca educational encounter is on its way, said Chief Financial Officer Peter Crage.

While acknowledging there was a slight attendance uptick in early January before the show ended, Manby said visitation started to recover toward the end of the month and should improve once new attractions come on line at the San Diego marine park.

This summer, the new Ocean Explorer attraction will feature a three-minute mini submarine ride. In 2018, the park is scheduled to unveil its fastest and tallest roller coaster, the Electric Eel.

“I’m Incredibly confident for the full year in California,” Manby said. “We’ve got the best lineup in the history of that park and we haven’t had new product there in quite a while. So between the orca encounter coming in May, Ocean Explorer and Electric Ocean, the new nighttime show, I think we’ll have a fantastic year there and I’m not concerned at all about a couple weeks of the aftermath of a show ending.”

SeaWorld also is planning to make increased forays into the world of virtual reality, beginning with retrofitting its Kraken roller coaster in Orlando so that riders, outfitted with goggles, will feel as though they’re in an underwater landscape.

There is a plan, Manby said, to eventually roll out such technology in SeaWorld’s other parks and not just for rides, but also in conjunction with viewing its live animals.

SeaWorld San Diego has talked about creating a “one-on-one” experience with the killer whales that relies on VR goggles and footage of the park’s whales.

According to a lawsuit filed by the FTC and the New Jersey attorney general's office, Vizio was capturing “second-by-second information” about what people viewed and selling it to companies that do targeted advertising. (Feb. 7, 2017)

According to a lawsuit filed by the FTC and the New Jersey attorney general's office, Vizio was capturing “second-by-second information” about what people viewed and selling it to companies that do targeted advertising. (Feb. 7, 2017)