In the last few years, it's become less common for a person to enter a company right out of college, learn the business from the inside and ultimately rise to the top position. But Morningstar's new chief executive, Kunal Kapoor, bucked the changing trend.He... 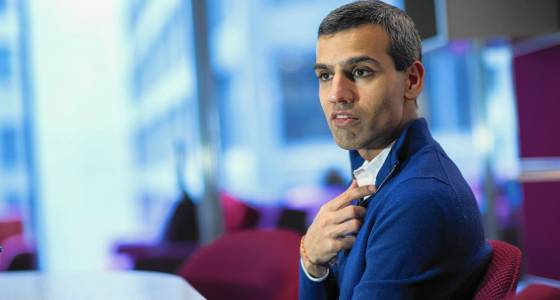 In the last few years, it's become less common for a person to enter a company right out of college, learn the business from the inside and ultimately rise to the top position. But Morningstar's new chief executive, Kunal Kapoor, bucked the changing trend.

He is the hometown boy at Morningstar. At age 41, he's spent 20 years at the nearly 33-year-old company that was a pioneer in democratizing investing for regular people. Founded by Joseph Mansueto in 1984, Morningstar taught do-it-yourself investors and advisers how to invest and how to pick solid mutual funds and later stocks, exchange-traded funds and other investments successfully.

Kapoor, who considers Mansueto his mentor, joined Morningstar as a data analyst and earned his MBA from the University of Chicago while working at the company. He moved into numerous operational roles as the company grew to over 4,000 employees with business in 27 countries and nearly $800 million in 2016 revenue. Kapoor became the chief executive of Morningstar in January as Mansueto, 60, left that position and became executive chairman.

Kapoor said he never had his eye on the executive suite. He simply enjoyed the job and Morningstar's unique culture as an innovator and independent voice for investors trying to analyze investments.

"It's never been a desire to absolutely have a particular position," he said. "As long as I'm having fun and growing professionally, I'm satisfied." The interview was edited for length and clarity.

A: We are similar in many ways. We are both patient and long-term investors and business builders. We don't get stressed out a lot. We both have contrarian lenses, are approachable, and have a deep-seated interest in helping the individual investor. Independence is built into the culture here.

Q: How are you different?

Q: Tell me what you value about the Morningstar culture.

A: It's founded on the notion of helping the individual investors and doing things the right way. Everything we do is in an independent fashion. We've never had a problem speaking out against a bad investment idea and that's a big deal. The analysts here have no problem saying what's on their minds. We protect that jealously.

Q: So say a Morningstar analyst writes about a mutual fund, gives it a bad score with your star ratings, and warns people that it's being poorly managed. What happens when the executives at the fund company are angry?

A: Our analysts are free to opine and the businesspeople are not involved.

Q: So they can't complain to you?

A: They often do complain to me, but I can't do anything about it. I ask them to talk to the analyst, and I explain why it's important to respect the walls we have. I think most people understand that's the value of working with Morningstar — our independent analysis.

Q: That was especially unique when Morningstar was formed 30 years ago. Most analysis was done by Wall Street firms that didn't want to offend their investment banking clients with a "sell rating" on a stock. Not only was Morningstar an independent firm, it was known for giving contrarian advice.

A: We have always taken a contrarian view. And sometimes the contrarian view means we recommend sticking with managers at the worst times — when their fund has not done well — if we like their approach. We often recommend stocks that have fallen in price. During the worst times stocks are the cheapest. We had the highest number of five-star stocks during the last downturn. ... Today if you look at our ratings we just have a handful of stocks rated five stars.

Though officially a Gen Xer, Pallavi Verma boasts some hallmarks of a baby boomer. She still uses Hotmail. She has worked at Accenture for 29 years, pretty much her entire adult life. During an interview, she mentioned rollerblading as a way people spend their free time.

Though officially a Gen Xer, Pallavi Verma boasts some hallmarks of a baby boomer. She still uses Hotmail. She has worked at Accenture for 29 years, pretty much her entire adult life. During an interview, she mentioned rollerblading as a way people spend their free time.

A: You want to pay a fair price when investing. I always use an analogy: Everyone loves a good sale. If they see a jacket on sale they buy it because they notice it's 50 percent cheaper than the last time they looked at it. Yet most investors have the opposite reaction.

Q: Morningstar has worked hard on Morningstar.com and your fund and stock newsletters to turn that thinking around.

A: I think we have more work to do. The majority don't love investing or understand it fully, and often when they do invest it's at the worst times. They tend to buy high and sell low and it's our job to continue to educate and expand our footprint to help those folks.

Q: Morningstar has added some new businesses. What's the thinking?

A: We just purchased a company in the private equity space and ventured into the credit rating space.

Q: How does that fit into Morningstar?

A: During the last downturn the big three (credit rating firms) were proven basically not to provide great service. So we saw that as an opportunity. We've established ourselves as a rating agency and over time we want to grow our presence in that space.

Q: You started at Morningstar analyzing data and mutual funds. Where did your interest in investing come from? Did you have it all the way back to when you studied environmental policy, economics and business at Monmouth College?

Q: Did he sit you down and teach you about stocks?

A: No, but he encouraged it. I can remember as a young kid deciding I absolutely needed him to buy some stocks and he humored me and bought them and I have no idea why. They didn't turn out very well, but it fed an interest.

Q: Are you teaching your three children?

A: I try; at least the older two, who are 11 and 9. I've purchased stocks for them and they have something to say (about) it. Much to my chagrin they like to buy things that have gone up quite a lot.

Q: You mentioned earlier that you value having fun in your career. What do you do for fun in your personal life?

A: I have a young family, so that keeps me quite busy, but I like running early in the morning and family vacations that are a little different. We went to the Galapagos Islands last year, and we're going to the Amazon this year. I have a keen interest in nature and environment and work on the Nature Conservancy board.

Q: Would you like to be on other boards?

A: No. Between family and work I have a lot going on, and one of Morningstar's board members gave me good advice years ago: "If you are going to join a board, join where you're really passionate about the things they are going to be focused on." That was terrific advice. I don't have to be on a board just for the sake of doing it.