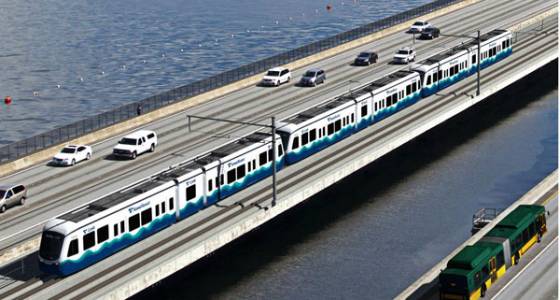 The East Link light-rail route would take over the current I-90 carpool lanes.

The East Link light-rail route would take over the current I-90 carpool lanes.

This map, included in the draft Sound Transit 3 proposal, shows existing, planned and proposed transit lines around the region.

This map, included in the draft Sound Transit 3 proposal, shows existing, planned and proposed transit lines around the region.

As light rail expansion plans continue to roll out, several Mercer Island residents are worried they’re living on the wrong side of the tracks.

The city of Mercer Island has announced its intention to sue Sound Transit and the state Department of Transportation over the loss of access to Interstate 90’s carpool lanes.

Mercer Island residents -- even when driving solo -- have historically been granted access to I-90's high-occupancy vehicle lanes, thanks to a deal struck in 1976 during pre-construction planning for the freeway. But later this year, when construction gets underway to add light rail across the I-90 express lanes, that access will go away.

In addition to losing HOV access, drivers on the affluent island would also lose access to ramps from Island Crest Way, the island’s major arterial, which city leaders said would result in congestion around the narrower streets of the city center.

It’s an issue that’s been grinding gears on Mercer Island ever since the light rail plan was proposed. On Feb. 1, a letter from both agencies confirmed that, under federal law, they could not permit single-occupancy vehicles to use HOV lanes.

"Neither the Washington State Department of Transportation (WSDOT) nor Sound Transit are empowered to reverse the Federal Highway Administration's decisions regarding access by single-occupant Mercer Island traffic to the new HOV lanes across Lake Washington," Sound Transit CEO Peter Rogoff said in a statement issued Tuesday.

And so, last night at a packed City Council meeting, Mercer Island’s council voted to sue.

For islanders, it seems, the issue is one of preserving the agreement from 1976, and of land use (local journalist Erica Barnett tweeted that someone during the meeting equated this fight to the battle over the Dakota Access pipeline). As an island spokesperson said, the suit was about buying some “breathing room.”

“Islanders approved the East Link Light Rail Project by a conclusive margin, and as a community, we still believe in the benefits the Project will provide to the region and to us,” Mayor Bruce Bassett wrote in a statement.

“But even the best public works projects bring consequences that must be taken seriously and mitigated effectively. So far, negotiations with Sound Transit and WSDOT haven’t yielded results, but we remain hopeful this issue can be resolved favorably and swiftly.”

The 14-mile East Link project has been chugging along for more than eight years and is scheduled to open in 2023. Both Sound Transit and WSDOT say they remain committed to staying on schedule.

"While Sound Transit remains ready to reach solutions through negotiations, the agency will take all legal actions necessary to avoid delays or increased costs to taxpayers in fulfilling our promise to voters to complete East Link," Rogoff said. "Building fast and reliable light rail service across Lake Washington is not only a commitment to the residents of Bellevue, Redmond, Mercer Island and Seattle but to every resident of the Sound Transit District.

"Delays to the East Link project pose significant risks of increased costs to regional taxpayers and significant delays to opening the project in 2023."

The city will seek an initial six-month moratorium on East Link permitting. It's moving full steam ahead in order to preserve its unique privileges, such as HOV access, Mercer Island resident-only parking at the park-and-ride lot, and special bus access.