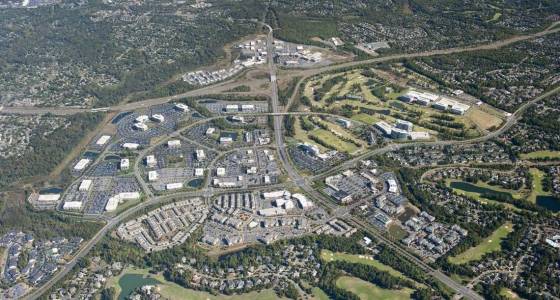 A total sale price of Ballantyne Corporate Park, rumored for months, wasn’t given, though real estate sources said the sale would total more than $1 billion. The Bissell Cos. developed the corporate park and owns the office buildings, four hotels, golf course and other property – almost all being purchased by Northwood Investors.

“The experience of developing Ballantyne Corporate Park over the last 21 years with such a talented and dedicated group of team members has exceeded my wildest dreams,” said Smoky Bissell, chairman of Bissell, in a statement. “I will forever be grateful to our 600-plus team members, as together we have made Ballantyne Corporate Park what it is today.”

Northwood Investors is a private real estate investment firm with more than $6 billion worth of assets under management. The company’s Charlotte affiliate, Northwood Ravin, owns apartment buildings such as the 51-story Vue uptown, and is developing another high-rise apartment tower on Stonewall Street.

“What Smoky and the Bissell team have created in Ballantyne Corporate Park is remarkable,” said John Kukral, president and CEO of Northwood Investors. “We are excited that the Bissell team will join Northwood and help lead the next phase of Ballantyne Corporate Park. This transaction represents one of our largest acquisitions to date and reinforces our commitment to Charlotte.”

Ballantyne Corporate Park is vast, covering some 535 acres and 4.5 million square feet of office space. Northwood Investors hasn’t detailed what changes, if any, it plans to make at the office park, which still has room to grow. Zoning designations currently in place would allow about another 1.5 million square feet of office space. That’s as much space as there is in the 48-story Duke Energy Center uptown.

The change represents a potentially historic shift away from local ownership for one of the city’s biggest developments, a virtual new city on Charlotte’s periphery that changed how and where people live, work, and commute in Charlotte. Ballantyne lured major companies, bringing thousands of jobs with firms such as MetLife, SPX, Wells Fargo, Snyder’s-Lance and TIAA.

A deed filed Wednesday shows an entity affiliated with Northwood Investors bought parts of the golf course at Ballantyne and about 10.3 acres for $33.15 million. Other deeds filed Wednesday, which would show the total sale price, weren’t yet publicly available from the Register of Deeds office.

Ballantyne, at the time the largest single development in the city’s history, also contributed to more traffic and sprawl around Charlotte’s edge, with thoroughfares such as Johnston Road becoming the bane of many commuters’ days.

Smoky Bissell, chairman of the Bissell organization, founded the company in 1964, developing much of SouthPark in partnership with Johnny Harris before turning his attention to Ballantyne.

Before it was developed, the land that’s now Ballantyne was owned by the Harris family and used for pastures, hunting and farmland. The company’s history describes the area as “a 2,000-plus acre plot of hardwoods littered with pine scrub and North Carolina underbrush.”

The route that Interstate 485 took opened the area up, cutting through the Harris land and connecting the then-remote area to Interstate 77, Interstate 85 and uptown. Plans for Ballantyne Corporate Park were first announced in 1991, when roads in the area such as U.S. 521 were still lightly traveled country highways.

“Harris’ development, named Ballantyne, is one of the most ambitious ever envisioned for Charlotte-Mecklenburg, and its potential impact on road construction, land prices and development south of Charlotte is enormous,” the Observer told readers on Aug. 9, 1991, in the first story ever written about Ballantyne.

Harris had originally decided on the name “Edinborough,” for the development, drawing on the family’s Scots-Irish heritage. That name was scrapped in favor of Ballantyne, the middle name of his niece, Smoky and Sara Bissells’ daughter.

The land, at that time, was worth about $35 million, Harris estimated.

As the development progressed, Bissell bought the land that would become the office buildings, and took the lead on developing Ballantyne Corporate Park. Bissell bought the first 414 acres of the corporate park land from Harris for just over $20 million in a handshake deal, according to the company’s history.

The company developed its buildings “on spec,” meaning that each one was started without a tenant signed on. The development thrived as an alternative to office space in uptown, drawing tenants with lower rates, plentiful parking and easy interstate access.

“A whole new city is emerging on the southern outskirts of Charlotte,” said an Observer story from 1995.

The office park continues to expand and draw new tenants. In October, Wells Fargo leased the newest and largest building at Ballantyne, where 1,600 employees will work.

Holes at the Golf Club at Ballantyne