In an amazing reversal of American policies, a neighbourhood in east London is prioritizing the safety of children over the convenience of cars.“It’s a sledgehammer to crack a nut.” This is how one angry parent described the recent crackdown by London... 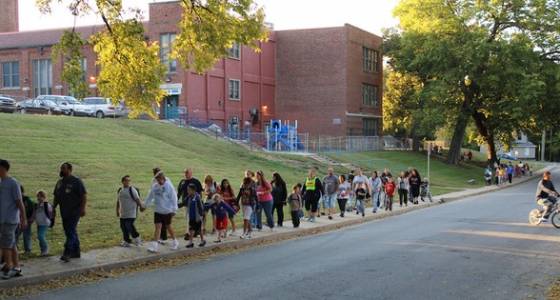 In an amazing reversal of American policies, a neighbourhood in east London is prioritizing the safety of children over the convenience of cars.

“It’s a sledgehammer to crack a nut.” This is how one angry parent described the recent crackdown by London police on parents who drop their kids off at school by car. Yes, you read that correctly – the very mode of transportation that many American schools insist is the only safe way to deliver kids to school is now being criminalized in the United Kingdom.

The decision to fine any vehicles seen dropping off or picking up kids within a particular zone of east London stems from city councillors’ prolonged efforts to make the area safer and less congested. They say they’ve been trying for years “to encourage sensible driving and parking,” to no avail. Neighborhood residents complain frequently about their driveways being blocked by illegally parked cars for 15 minutes or more, often while they’re trying to get to work, and the streets are chronically overcrowded.

Now the rules have changed. The Evening Standard reports:

“Drivers of any vehicle seen dropping off or picking up pupils in zones outside four primaries in east London now face fixed penalty notices of £100. Any who fail to pay within 14 days, or who are caught three times, have been told they will be prosecuted and could be fined up to £1,000.”

Some parents are furious. Angie Baillieul is a mother who made the “sledgehammer” comment and says the crackdown is “way over the top.” The nearest drop-off point for her six-year-old is now a five-minute walk from the school. Others are happy with the decision, drastic though it may seem. Councillor Jason Frost said:

“Traffic has significantly reduced, and more children are now walking to school, which is a great outcome. I would rather have complaints that we are slightly inconveniencing parents than hear that a child had been seriously injured because nothing was done.”

From TreeHugger’s perspective, this is happy, refreshing news, especially after covering stories like Bear Branch Elementary School in Magnolia, Texas, where police fine parents for not picking up their kids by car. Of course, exceptions exist, but in most North American towns and cities, if a school bus is not assigned to pick up a child within their designated school catchment area, it means the child is considered close enough to walk. Unfortunately, many parents interpret this lack of bus service as being their responsibility to drive, even if they live mere blocks away.

I witness daily the chaos created by these in-town drivers, when I walk my own kids to school. There’s a parking lot overflowing with vehicles and a slow-moving train of cars moving in circles, many idling and filling the air with noxious fumes. (The idea of a five-minute walk protection zone, for the purpose of improving air quality alone outside schools, is a good idea.) Meanwhile, the conversations around child obesity and the importance of daily physical activity continue to dominate in schools. It’s impossible not to notice the irony.

No doubt there will be fierce pushback against this city council decision in London, but it stands as a hopeful beacon for the many other schools that remain in the Dark Ages when it comes to prioritizing children’s safety around vehicles.