Fans of BlackBerry’s classic physical keyboard will have reason to celebrate when the last product designed in part by the former smartphone leader becomes available in April.The Waterloo-based firm played a role in developing the KEYone, named for... 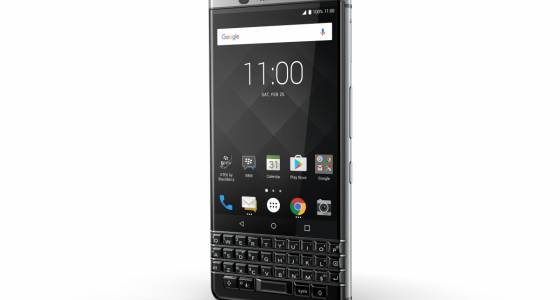 Fans of BlackBerry’s classic physical keyboard will have reason to celebrate when the last product designed in part by the former smartphone leader becomes available in April.

The Waterloo-based firm played a role in developing the KEYone, named for the return of the QWERTY keyboard that other smartphone designers have mostly long retired.

“BlackBerry did have something to say about the industrial design,” said Steve Cistulli, president of the North American division of TCL Communication Technology Holdings.

Cistulli said TCT will manufacture and sell the smartphone in Canada and several other countries as part of its partnership with BlackBerry.

The deal allows the company to design, manufacture and sell BlackBerry-branded smartphones that operate using the technology firm’s security software. BlackBerry receives a commission for each phone sold.

The KEYone is the first phone to hit the market under this partnership, but Cistulli indicated BlackBerry will no longer play a design role in any future products.

BlackBerry CEO John Chen said last September the company was exiting the hardware business, which struggled with profitability as Apple and others dominated the market, to focus on its growing security software operations.

The KEYone features a 4.5-inch touchscreen, fingerprint sensor and rear- and front-facing cameras. It comes with a microSD slot that can extend its built-in memory by up to two terabytes and claims to be able to recharge up to 50 per cent in about 36 minutes.

Cistulli could not provide an exact price for Canadians, but it will retail south of the border for $549 U.S. He expects Canadians to pay that plus the exchange rate, roughly $720.

The company expects it will be sold by most Canadian wireless carriers as well as online.

TCT will probably release at least one more BlackBerry-branded phone this year, and will determine the rollout for the next two or three phones once it sees how the market is doing, he said.

Cistulli would not disclose how many phones the company hopes to sell.

The company expects to design, manufacture and sell more versions of phones with the physical keyboard, as well as grow BlackBerry’s DTEK50 and DTEK60 touchscreen phone lines.

TCT unveiled the KEYone at the Mobile World Congress in Barcelona.