LAKE FOREST – A five-story Marriott Hotel could become the next addition to the newly renovated Gateway Center, off Lake Forest Drive and Rockfield Boulevard.After a two-hour public hearing, the City Council voted unanimously Tuesday night to give preliminary... 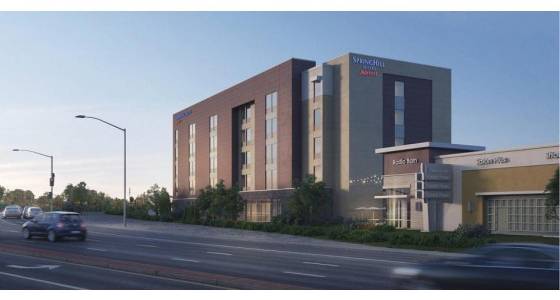 LAKE FOREST – A five-story Marriott Hotel could become the next addition to the newly renovated Gateway Center, off Lake Forest Drive and Rockfield Boulevard.

After a two-hour public hearing, the City Council voted unanimously Tuesday night to give preliminary approval to a 102-room Springhill Suites Marriott hotel that would add 154 parking spaces to the center.

Some tenants at the center provided the City Council with a petition that 26 of the 29 businesses in the center signed in support of the project, including Buffalo Wild Wings, Hard Core Fitness Studio, Starbucks and Peppino’s.

“I think it’s going to be a great project,” Councilman Andrew Hamilton said. “I think the demand is there. It’s going to increase the economic engine here in the city.”

Proposed for the south side of the center, adjacent to the northbound I-5 on-ramp from Lake Forest Drive, the hotel would replace a previously approved but never constructed 13,000-square-foot retail building.

The hotel would have a buffet area and 1,700-square-foot lounge, but no restaurants or large conference rooms, said Don Cape of Tharaldson Hospitality Group, the applicant for the project.

It would employ about 10 people, Cape said.

The council will take a final vote on the project at its March 7 meeting.

The hotel project – situated next to Buffalo Wild Wings restaurant at the center – would include an 85-stall underground parking garage, the staff report said.

That area would also be available for employees of the center, leaving more outdoor parking spaces for patrons. The project would also add 69 ground-level spaces, the report said.

City Council members had some concerns about the project, generally centered around parking and traffic issues.

Gardner also questioned whether the project would lead to an oversaturation of hotels in the city.

Lake Forest in 2016 experienced significant business growth, with more than 150 new businesses and 800 new jobs added to the city, increasing its overall daytime population, according to the city’s staff report.

Several of Lake Forest’s largest companies have executives who travel to the city, resulting in an increased demand for hotels and restaurants, the report said.

Heiko Peschel, a Foothill Ranch resident, said he recently had trouble finding a nearby hotel room for some visitors because nothing was available.

“The people in this city are not the ones who fill the hotel rooms,” Peschel said. “They’re visitors, businessmen, they’re people who can’t afford Irvine or Newport Beach or Newport Coast and want to be close.”

Larissa Fellick Clark, a Lake Forest resident, complained about parking and traffic problems at Gateway Center and asked the council to “get it in writing” that the center’s employees can utilize the underground parking.

“I want these businesses to be successful, but when I go into that center, it’s a mess,” she said. “Now we avoid it.”

The city will work with the center’s owner, Patrick Cox of Value Rock Realty, to improve the traffic flow into the center through customized signal timing, a staff report said.

Those changes should reduce wait times and allow more vehicles through on Rockfield during the left-turn signal, Mayor Scott Voigts said.

The Gateway Center, constructed in the 1970s, has experienced several changes in recent years.

In 2014, the Planning Commission approved a complete remodel of the center, including the demolition and construction of five buildings, four of which have been built. The hotel would replace one of the five buildings.