It's a bike lane, not a construction loading area

Where I live, in Toronto, Canada, there is a construction boom going on that affects almost every major street in the City. Maintaining bike lanes, or any provision at all for cycling, is not a high priority. I go through the intersection shown in the photo... 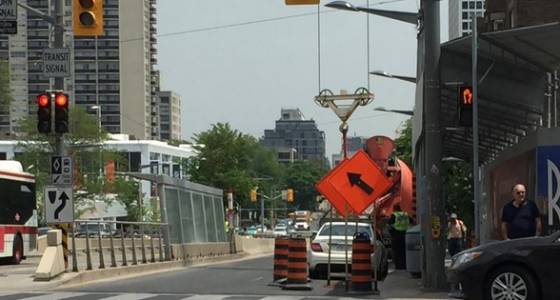 Where I live, in Toronto, Canada, there is a construction boom going on that affects almost every major street in the City. Maintaining bike lanes, or any provision at all for cycling, is not a high priority. I go through the intersection shown in the photo above regularly, squeezed between the lane occupied by the readymix trucks and the concrete wall of the streetcar barrier on the left, and worry every time.

When there are bike lanes, they are favoured parking and loading areas for the trades, sometimes occupied for months or years as this one was.

I have noted before (and Copenhagenize notes constantly, as in this recent tweet) that cities who care about cyclists have strong regulations for construction firms, who must keep the routes open for cyclists, although the way Copenhagen lets cyclists ride under working cranes is pretty scary too. But at least they have thought about the problem.

Now Toronto is considering new rules. According to May Warren in Metro,

Local advocates hope new city guidelines for temporary closures related to construction work or filming can ease this frustration and make city streets safer for everyone. The guidelines are “intended to minimize disruption and improve safety for cyclists,” wrote Jacquelyn Hayward Gulati, acting director of transportation infrastructure management at the city of Toronto.

Reading the recommendations, one quickly realizes that Toronto ain’t Copenhagen, the word “consider” doesn’t inspire a lot of confidence. There doesn’t seem to be an actual requirement. Furthermore they still allow the dreaded “cyclist dismount and walk” signs, which are such a convenient solution when they want to drop a trailer for a couple of months.

Some people get this; I have been impressed more than once by Toronto Hydro, the electric utility, who set up an elaborate detour of the bike lane around their truck,

Meanwhile, two blocks away, with the same road width and bike lane conditions, another construction company just blows off the cyclists instead of bothering to do the diversion.

It is a changing world, with more and more cyclists on the road all year round. Yet there is so little thought given to it; This UPS driver blocking this bike lane yesterday could have blocked a driving lane instead, and left a safe route for bikes; instead he chose to leave two lanes for cars and force me out into the road.(I have encountered others who did; surely there could be a policy on this).

I think we need a bit less “consideration” of options, and a bit more regulation and enforcement. Perhaps North American cities should have to go the full Copenhagen and do really effective bike lane relocation as shown here. It really should be a rule: Don’t block the bike lanes.