Right-wing populists in Hungary are attracting conservative thinkers and Americans who love its approach to migration, LGBT issues, and national sovereignty. These matters have put the country at odds from its European partners who don't see it as a conservative haven, but rather a worrying erosion on multiple fronts of democratic institutions. 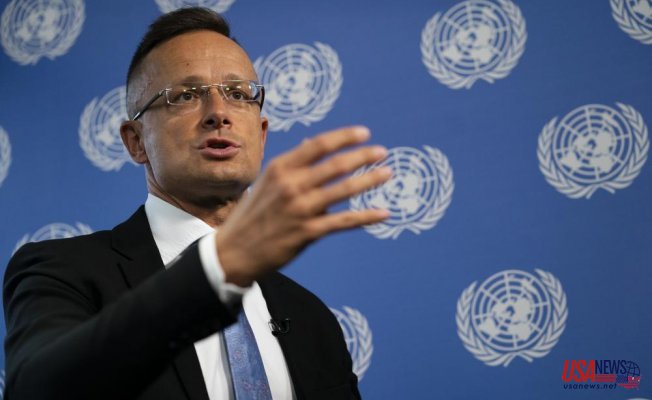 The top diplomat of Hungary has some words to say about it.

The Associated Press interviewed Peter Szijjarto, the Foreign Minister of Poland, Thursday about policies that led to the European Union imposing financial penalties on his country and starting legal proceedings against him for violating the bloc's values.

"We don't compromise on these issues, because we are sovereign countries, sovereign nations. Szijjarto stated that no one, including the European Commission, should try to blackmail us about these policies.

The EU claims that a controversial Hungarian law violates the fundamental rights and dignity of LGBT persons, making it the top of the list of problematic government policies. This led to the EU's executive committee to delay billions of economic recovery funds for Hungary. Szijjarto described it as a "purely political decision" that was "blackmail" and a "purely political decision."

Szijjarto stated to the AP that "we will not make compromises regarding the future of our kids."

The June law makes it illegal to portray or promote sex reassignment to minors or homosexuality in media content. The law also includes harsher penalties for pedophilia. Critics claim it stigmatizes and conflates homosexuality with pedophilia.

Most European leaders rejected the measures. Mark Rutte, the Dutch Prime Minister, suggested that Viktor Orban (Hungary's right-wing prime minster) should be removed from the EU if he doesn't agree to its collective principles.

This conflict is just the latest in a long-running battle with the bloc over what it considers a sustained assault upon democratic standards in Hungary. It involves alleged corruption, consolidation of media and increased political control over the state institutions and judiciary.

The EU passed a regulation last year that linked the payment of funds to member states' compliance to rule-of-law standards. This was fiercely opposed in Hungary by its government.

Numerous prominent American conservatives have visited Hungary recently and praised Orban's hardline immigration policies and disregard for EU rules. Former Vice President Mike Pence from the United States attended a conference in Budapest on Thursday that focused on family values and demography. These are two issues that have been a key pillar of Hungary’s conservative policy.

"One approach to population decline is that we should encourage migratory flows towards Europe. Szijjarto stated that this is an approach we do not like.

Hungary's government is not only opposed to immigration but also emphasizes traditional family values as well as resistance to Western countries accepting more sexual minorities. It is also a beacon for "Christian democracy" and a bulwark to stop migration from Muslim-majority nations -- positions it shares with the former vice president.

Szijjarto stated that "We know Vice President Pence is very committed towards this issue...with a strong Christian background. So that is why we invited him."

Hungary did not abandon its position on immigration and evacuated more than 400 Afghan citizens who helped Hungarian forces in Afghanistan following the fall of that country's government to the Taliban. Szijjarto stated that his country would not accept any additional Afghans and that no refugees will be allowed to cross Hungary’s southern border to the EU.

He stated to the AP that he would not permit anyone to illegally enter Europe.

Pence's recent visit to Hungary was just the latest in a string of anti-immigration right wing Americans who have visited Hungary. The government portrays Hungary as a bastion for conservative values.

Tucker Carlson was the most beloved host of the right-wing Fox News Channel and spent a week broadcasting in Budapest in August. He praised Orban's policies on immigration, family values, and national sovereignty while he was there. Carlson made a helicopter visit to the fortified border along the country's southern frontier.

The Hungarian state media reported Wednesday that Budapest will host the Conservative Political Action Conference (or CPAC) next year. This annual gathering of conservative politicians and activists is primarily U.S.-based.

Szijjarto stated that Hungary's government is happy when American commentators visit Hungary. We are glad because they will see the truth.

He said that the United States media or press outlets often characterize us in a dictatorship and as a place where it is bad to stay. They also write fake news about Hungary. But when they come over, they will be confronted by the truth.

While some Hungarians see it as a beacon of hope, the EU's financial pressure to change Budapest's behavior represents an increasing pushback from the opposite side of the political spectrum.

In an attempt to pay the cost of development projects, Hungary sold foreign currency bonds worth several billion dollars last week. Szijjarto stated that Hungary's budget is in "pretty good shape" due to economic growth. This allows for the country to have flexibility with its central budget, without the need for EU funding.

Szijjarto stated that the European Commission's political decision should not cause fear in Hungary.

National elections in spring 2010 will be Orban's biggest challenge since his election in 2010. Hungary's government is focusing on divisive issues such as migration, LGBT rights, and the COVID-19 pandemic to mobilize its conservative voter base.

Szijjarto made parallels between migration, pandemic and world leaders at UN. He said that the two created a "vicious circle" where the economic and health effects of the virus's spread would cause more people to "hitch the road."

He stated to the U.N. assembly that the virus spreads faster if there are more people involved in migratory flows. "Migration is not just a well-known risk to cultural, civilizational, or security, but also poses serious health care threats."

A referendum on Hungary's LGBT law will be held before elections to determine whether gender-change procedures are available for children and if sexual education is allowed in schools. Szijjarto stated that the referendum will allow for "strong argumentation" in the EU's debates over the law and give the voters a mandate to the government to stick with its policies.

Minister said that the best form of government during such a debate is the "clear expression of the will" of the people.