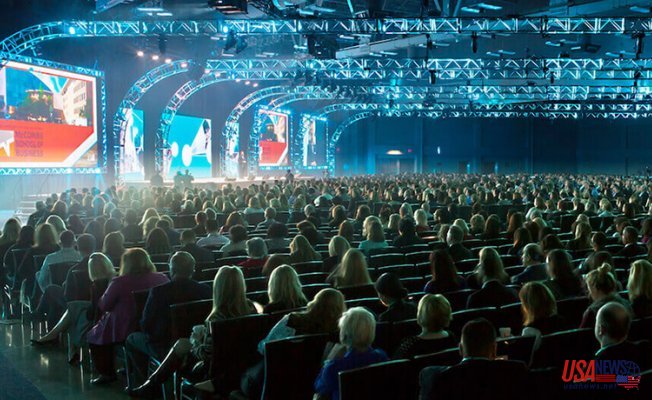 Cast your mind back to the very start of 2020. Everything was normal, though there were some news reports starting to appear about a new disease called Coronavirus. Fast-forward to 2021, and it now hurts to look back at the year that was, where the world was gripped by a global pandemic. In the UK, we experienced a series of stay-at-home lockdowns, with millions of people furloughed from their jobs and others working from their laptops at home as the Government battled the spread of the disease and desperately tried to find the holy grail of a vaccine.

The event industry was one of the first to get locked-down as it soon became apparent that mass gatherings were a major issue. As a result, this particular industry was, and continues to be, seriously affected by this vile disease.

Typically, the event industry is worth around £40 billion to the UK economy, employing around 530,000 people across 25,000 events related businesses. Many of the people working in this sector are freelance or self-employed, which brought with it problems in terms of a lack of financial support from the Government. Yes, the furlough scheme was in operation for employees, but not for self-employed.

Which events were affected?

With mass gatherings cancelled, it was very much the case of battening down the hatches for all those companies involved in the events sector, from creative agencies and professional caterers, through to event furniture hire companies (such as easy Event Hire UK, for instance) and AV companies, to name just a few. Put simply, everyone has been affected.

Brides and grooms who had been planning their big day for years had to put their plans on hold and either cancel or postpone. Wedding venues and suppliers including wedding furniture hire and outdoor furniture hire companies took a battering.

Mental health became even more of an issue for many people who were effectively being told how to live their lives. One of the sectors that did continue was professional football, albeit with no fans allowed into the grounds. Professional sport, at this 'elite' level, continued. The players at the clubs formed 'bubbles', with constant testing taking place so that competitions such as the Premier League, Champions League and others, for instance, could continue. Semi-professional sport, however, was not so lucky, and many of the lower football league campaigns had to be abandoned.

Large music festivals such as Glastonbury, for example, was again cancelled in 2021 following their cancellation the year before, and many festivals who are hopeful about going ahead this year are getting increasingly worried about this in light of the fact that they can't get cancellation insurance.

Even international events such as the Olympics, for instance, planned for later in 2021 seem to be hanging in the balance.

What does the future hold?

It's really difficult to say, as it is across all other sectors of society. Whilst there are green shoots of hope springing up around us, who knows how the market will evolve from here. There's no doubt that mass gatherings will continue to be closely monitored, and certainly the requirement for hand sanitizing is here to stay, at least in the medium term. Will conferences and exhibitions needing conference furniture hire return to the same extent, volume and size as previous, or are we moving more towards a virtual world of networking? All will become clear in the months and years to come, but hopefully the 'new normal' will bear some resemblance to the 'old normal' in many ways - after all, we liked it like that!

For now though, in June 2021, almost all vulnerable and elderly residents in the UK have had their double dose of vaccine, with many millions more having had at least one dose and so protecting them to a certain extent against the dreadful effects of COVID-19. So, here's looking forward to a brighter future, not just for the event industry, but for the whole world at large.