NEWARK -- The speaker was as inspiring as the view. "He's very inspirational," said Janell Darisaw, a 14-year-old eighth grader at Link Community Charter School in Newark. Janell was talking about Eric Thomas, the best-selling author and motivational... 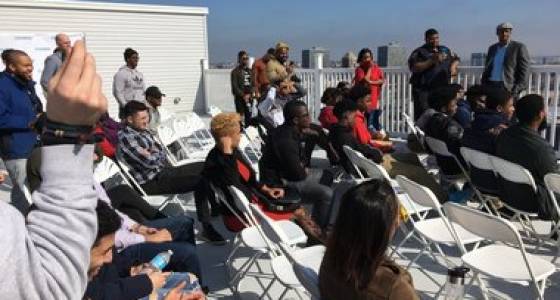 NEWARK -- The speaker was as inspiring as the view.

Janell was talking about Eric Thomas, the best-selling author and motivational speaker, who went from homelessness to wealth and a PhD, with testimonials from the likes of NBA great LeBron James.

Thomas, known as the "Hip Hop Preacher," gave a talk Thursday afternoon beneath unusually warm, sunny skis on the roof of Fownders, an incubator for aspiring tech entrepreneurs that overlooks downtown Newark from Norfolk Street, in University Heights.

With 60 mostly young onlookers standing and seated in folding chairs, Thomas' backdrop was an unobstructed view of downtown Newark, the Passaic River, Jersey City and Manhattan.

Holding a microphone, gesturing with his free hand, and pacing like a rap artist on stage, Thomas used humor, compassion and ferocity to address his young listeners, who hung on his every word. He said he wanted a 120-percent effort from them, not merely on the football field or the basketball court, but in class.

How Bad Do You Want It? (Success) HD

They didn't have to love school, Thomas told them, admitting that he didn't. But, he said, they did have to put as much effort into it as anything else they did, if not more, in order to succeed in life.

"You could go to Harvard if you wanted to, you could go to Yale, Cornell," he told a group of high school students seated in the front row.

His own life story was his most compelling tale.

Thomas grew up in Detroit, left home and lived on the streets. After a minister convinced him to make something of his life, he worked while going to school part time, taking 12 years to complete his bachelor's degree at Oakwood University in 2001. He then earned a master's at Michigan State University in 2005, and eventually a PhD from MSU in education administration in 2015.

His books include "The Secret to Success," "Greatness Is Upon You: Laying the Foundation," and "Average Skill Phenomenal Will." His YouTube video, "How Bad Do You Want it (Success)" has had over 40 million views.

In his rooftop talk, Thomas invoked the example of a mother who would fight off a Rottweiler attacking her infant. And he told the young men and women present that battling to pass a math or English exam could have similar long-term consequences for their own families one day, determining whether they would be able to protect and provide for them.

"So next time, I want you to think about, 'Am I running? Or am I protecting?'" said Thomas. "Listen to me carefully: My father wasn't in my life, but it feels good taking care of my kids."

Fownders was cofounded by 32-year-old digital entrepreneur and Bloomfield native Gerard Adams and his longtime friend Pedro Gomes of Newark, a housing developer. Their aim is to provide formal training, mentoring and physical space to help youth in Newark and other urban areas realize their potential, creatively and in the business world.

Before Thomas' talk, Adams played with Fidget 360, an anti-anxiety spinning toy manufactured using a 3-D printer, which he said had been developed by a duo of 17-year-old Fownders alumni known as Alan & Cooper. Adams said the Fidget 360 had sales of $60,000 last month.

The Link Charter School, where Janell is in 8th grade, has a relationship with Fownders, and is developing an elective that will be a middle school version of the incubator's 6-week entrepreneur course, said Natalia Sardo, Link's foundation and corporate grants officer.

In addition to his talk, Thomas was at Fownders on Thursday to discuss opening a branch in his home town of Detroit, Gomes said.

Meanwhile, Gomes added, Fownders is nearing completion of additional space just around the corner, and developing partnerships with other educational institutions, including the New Jersey Institute of Technology.

One of Janell's Link classmates, Donald Oyebola, said he wasn't aiming to become an entrepreneur. But the 14-year-old said he was inspired by Thomas' talk.

"I have plans to be go to the NBA," Donald said. "But if that doesn't work out, I'd like to be a biomedical engineer."