Dubai: A Filipina who was abandoned on the road after losing her memory following a diabetes complication in December is finally going home to be with her family in the Philippines on Friday.Milagros Chenilla, 63, lost her memory temporarily on December 14... 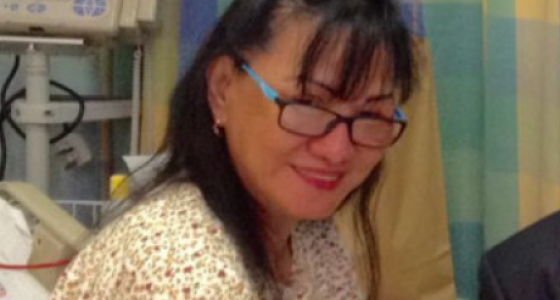 Dubai: A Filipina who was abandoned on the road after losing her memory following a diabetes complication in December is finally going home to be with her family in the Philippines on Friday.

Milagros Chenilla, 63, lost her memory temporarily on December 14 on the way to a job application with some friends.

The Filipino expatriate, who earlier worked in Abu Dhabi as a teacher for six years, was then staying in the country illegally for almost a year after losing her job.

“When I regained consciousness, I was already in the hospital but I had no memory. My whole body was paralysed and I couldn’t talk. I tried hard to open my mouth to speak but nothing,” Chenilla told Gulf News.

Ray Angulo, a volunteer social worker who had helped Chenilla from day one, said Chenilla’s friends left her unconscious in one of the streets in Al Ghusais probably because they were scared as they were also staying illegally in the UAE.

“For several days, Chenilla was a Jane Doe in the hospital; she was unknown. She had an episode and fell unconscious. She had no one visiting her, no friends, no one,” Angulo said.

Angulo then tried to establish her identity by allowing her to search on Facebook and together, they were able to trace who she was bit by bit after four days.

“I am grateful to Rashid Hospital for accommodating me despite my status. They took me in without questions. I thank all the doctors, nurses, and cleaners who lovingly took care of me as if I’m part of their family. My thanks also go to everyone who prayed for me,” Chenilla said.

Chenilla will need one more operation once in the Philippines to remove her uterine fibroids. She said one of her daughters will care for her once there.

“I think it will be a bittersweet homecoming. One of my daughters disowned me when their father, who suffered from stroke, died on December 14 last year, the same day I was admitted at Rashid Hospital because I couldn’t send them financial support.”

“But it’s OK. The most important thing right now is I survived and I’m coming home to my family alive. I thank God for that.”

Angulo, who pushed for Chenilla’s repatriation from Dubai instead of Abu Dhabi, said Chenilla’s trip was made possible through the assistance of the Philippine Embassy and the Consulate-General.

Officials from the Assistance-To-Nationals section of the consulate personally visited Chenilla on Wednesday before her scheduled discharge on Thursday night. They also made rounds at the hospital to check on the condition of other Filipino patients.

“They told me to remain hopeful, that all will be well and that the government is extending all possible help,” Chenilla said, adding she is grateful to the Philippine government’s help.

Asked what her fondest Dubai memory is, Chenilla said it’s when she found a family in Angulo when everyone else had abandoned her, including her sibling in Abu Dhabi.

“Mr Ray is a very warm hearted and generous person. He stood by my side every step of the way. He facilitated everything for me. If it weren’t for him, I wouldn’t have been able to know my true identity,” Chenilla said.

“I have all but gratitude in my heart right now. I’m finally going home.