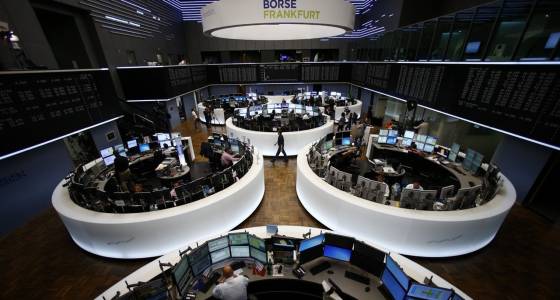 In his speech, Trump said he wanted to boost the U.S. economy with tax relief, an overhaul of the Affordable Care Act and an infrastructure push.

Meanwhile, comments from a handful of Federal Reserve policymakers that suggested rate-setters are worried about waiting too long in the face of pending economic stimulus from Washington jolted markets into higher expectations for a March U.S. interest rate increase.

Regional dealmaking continued apace with Spain's Banco Sabadell, Spain's fifth-biggest bank, a top gainer, up 3.4 percent, after it said it had sold its Florida retail unit to Iberiabank Corp for $1 billion.

Italian luxury outerwear company Moncler was a top European gainer, up 4.4 percent after it posted an 18 percent increase in sales for 2016, boosted by Korea, China and the United States.

German plastics maker Covestro was the top faller, down 7.8 percent and headed for its worst ever day, after pharmaceuticals giant Bayer said it reduced its holding in the company from 64.2 percent to 53.3 percent, placing Covestro shares in the market at 66.50 euros a share.

British hedge fund firm Man Group was among the worst-performing stocks, down 6.8 percent, after its results. The firm said total assets rose 3 percent in 2016, though weak performance in some funds saw fee income slide.

Europe's biggest pure online fashion retailer Zalando was down 4.1 percent after its results. It said it would invest heavily in 2017 and create more than 2,000 jobs, announcing its first move into physical stores.