Dow now over 21,000, but Richard Driehaus advises investors to stay in stocks

The stunning rise of the Dow Jones industrial average to over 21,000 Wednesday could put investors on edge if they live by the mantra of buying low and selling high. But Richard Driehaus is not one of them.A longtime icon of Chicago's investment community... 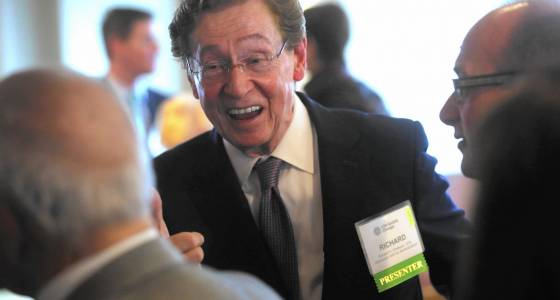 The stunning rise of the Dow Jones industrial average to over 21,000 Wednesday could put investors on edge if they live by the mantra of buying low and selling high. But Richard Driehaus is not one of them.

A longtime icon of Chicago's investment community and a recognized pro on the national stage, Driehaus told an audience of professional investors Wednesday that this is no time to bolt from stocks.

Driehaus, who is a native of Chicago and the founder of Driehaus Capital Management, is known as a momentum investor. That means he likes to buy stocks that are on a roll rather than those that have become cheap after being snubbed by investors. Tuesday he told his CFA Society Chicago audience that he thinks the U.S. stock market is overvalued, but it will continue to climb more anyway.

His rationale differs from the typical analyst focused lately on politics and the belief that newly elected president Donald Trump and a Republican Congress will stimulate growth through tax cuts, reduced regulation and infrastructure spending.

Driehaus didn't mention a word about Donald Trump's victory Nov. 8, which set off an unusually sharp rally in the Dow, with the market climbing more than 15 percent since the election and the Dow jumping from 20,000 to over 21,000 in just 24 days. Instead, Driehaus said after the presentation that he merely thinks people will be pulling money out of bonds as interest rates rise and then will deposit the money in the stock market.

"The U.S. (stock market) will go up more," he said. Yet, he told his audience that greater opportunity to make large returns — if they can stand the risks — will be in Europe, Asia, Latin America and what are known as frontier markets. Those markets include areas in early stages of development. Although the world has faced growth concerns, he said demand for products will be growing faster in international markets than in the U.S. And to profit from growth around the globe, his favorite investments now are in companies in the energy, technology and mineral sectors. For investors seeking income from their investments, he emphasized investing in real estate investment trusts, or REITs, because they yield more than the stocks in the Standard & Poor's 500 index.

While investment pros go through heavy training on examining stock values as they pursue the rigorous chartered financial analyst designation, Driehaus said he has found an investor can "make far more money by buying stocks that have made highs" and then continue to make new highs than by buying cheap struggling companies. "There is a risk of being at the top (after stocks have already climbed a lot), but I'd rather take that risk than to buy a stock that has declined and have to guess when it will turn around," he said.

Why the stock market has climbed to record highs despite Trump uncertainty James F. Peltz

It’s often said the stock market hates uncertainty, so one might assume Wall Street would be very skittish about President Donald Trump.

Far from it, at least for now.

It’s often said the stock market hates uncertainty, so one might assume Wall Street would be very skittish about President Donald Trump.

Far from it, at least for now.

Yet he added that people can't get caught up in the popular thinking of the day and expect certain stocks to remain winners simply because they've been successful. He said that Sears, which now is struggling, was once the nation's largest department store chain but lost its edge amid corporate arrogance. And Willis Tower — the building where he was speaking, which was once called Sears Tower — has gone from great success to disappointment, he said.

He challenged the recently popular notion in the financial media that so-called active fund managers, like himself, are becoming a dying breed as investors yank money from active funds and instead put it in index funds and exchange-traded funds that don't hire stock pickers.

"Many have called for the death of active management," he said, referring to the professional investors who try to pick winners rather than simply buying an index that holds the full stock market or a chunk of the stock market. But Driehaus said signs in the market suggest that investors will again — at some point — want the expertise of investment pros who pick and choose stocks and want his style of picking fast-growing companies and stocks rising on momentum.

His confidence, he said, comes from the fact that investors always sell at the bottom of the market and buy at the top. He noted: "I know it's not a top now, because money's not coming in" to funds such as his.