Galleries Videos CONTACT ADVERTISE
Famagusta 23°
few clouds
BUSINESS EDUCATION ENTERTAINMENT HEALTH POLITICS SCIENCE SPORTS TECHNOLOGY
12:08 Guide To Online Sports Betting: How To Choose A Sportsbook
08:28 What Are Some Reasons to Consult a Brain Injury Lawyer?
09:24 Blockchain Solutions for Enterprises: How To Increase Efficiency And Profitability
07:06 How To Deal With A Car Crash In New York
17:43 Tips to keep in mind while choosing the casino site
11:34 Relation Between Employee Theft and Pre-employment Screening Check
04:37 Search your own desired site to play sports for betting
18:00 Top 3 Career Path Options for Business Analysts Preview
15:35 The history of Imen Jane, who is the influencer and the charges on the...
18:48 Sebastian Vettel's Greatest Races
BIST
1120
GOLD
457.590
USD
7.6108
GPB
9.7205
EUR
8.8768
Breaking News
Top 3 Career Path Options for Business Analysts Preview
Close

OTTAWA—Bank of Canada Governor Stephen Poloz has been keen to point out how much weaker his country’s economy is relative to the U.S., ostensibly in a bid to ensure investors don’t get too far ahead of themselves pricing in interest rate... 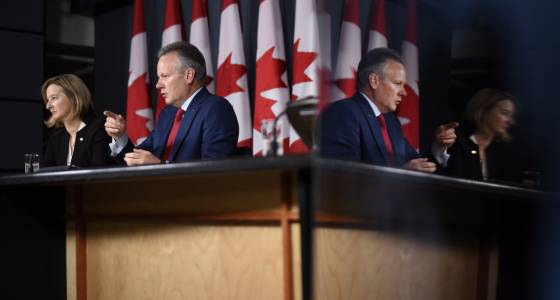 OTTAWA—Bank of Canada Governor Stephen Poloz has been keen to point out how much weaker his country’s economy is relative to the U.S., ostensibly in a bid to ensure investors don’t get too far ahead of themselves pricing in interest rate hikes.

The central bank, whose next announcement is Wednesday, has referenced the divergence between the two economies in its last two statements — in January and December — and has provided even stronger language outside of rate decisions.

“We would not expect to see Canada following the U.S. at this stage in terms of monetary policy,” Poloz, who began his term as central bank governor in 2013 by downplaying forward guidance, said earlier this month after a speech in Edmonton, in a clear nudge to the markets.

So what’s with all the steadfast caution? Eric Lascelles, chief economist at RBC Global Asset Management in Toronto, has collated productivity data that may explain some of the central bank’s circumspection.

Using inflation-adjusted unit-labour-cost data, Lascelles estimates that for the first time since 2006, Canada is solidly more competitive than the U.S. — but barely.

Canadian wages, by Lascelles’ calculations, are about 6-per-cent more competitive than they are in the U.S., after being as much as 25-per-cent less competitive as recently as 2011. While accelerating U.S. labour costs explain part of the shift, the almost 30-per-cent decline in the Canadian dollar from 2011 highs has been the main determinant.

Which explains why policy-makers — having just gained a bit of an edge — may be sensitive to any strengthening of the dollar.

“Canadian competitiveness is really just on the cusp of viability right now,” said Lascelles, who helps oversee about $290 billion in assets at RBC Global Asset Management. “Long experience suggests you either need to be in that position for years until people gain confidence it will endure to justify capex, or you need to shift into an extraordinarily compelling position.”

The loonie has gained about 2.3 per cent against the U.S. dollar this year, as higher oil prices and a recovering American economy outweigh concerns about the potential hit to Canada’s competitiveness.

Rising oil prices have indeed improved the country’s export picture. Canada posted a trade surplus for the second month in December. But overall it was a tough year, as the country’s cumulative trade deficit reached a record in 2016. And the situation remains weak. Nonenergy exports were down 2.1 per cent in December from a year earlier.

Canadian policy-makers will never stop worrying about trade. That’s borne out by the heightened importance Poloz is placing on the risks associated with U.S. protectionism — which featured prominently in the last interest-rate statement, and speculation U.S. President Donald Trump may impose a border adjustment tax to help pay for some of his policies.

“The magnitude of tariffs being discussed is very much within the wheelhouse of shifting Canada from this slight advantage to a disadvantage,” Lascelles said.

Here are some things to watch for in the rate statement: investors are pricing in practically no chance of a rate change over the next three rate decisions, with odds for a hike growing in the second half of the year. Swaps trading shows a 36-per-cent chance of a rate hike by December.

Bets on a cut are negligible. The last statement began by flagging uncertainties to the global outlook, “particularly with respect to policies in the United States.” There doesn’t seem to be any clarity on these core issues since then so these concerns could be reiterated. Will the Bank of Canada continue to point to underlying slack in the economy, even as recent reports show momentum is gathering?