A chronic shortage of treatment facilities has put the mentally ill on Oregon's streets and in its jails in dismaying numbers. So you'd think mental health advocates would be doing backflips over the news of a proposed 100-bed psychiatric hospital in Wilsonville.... 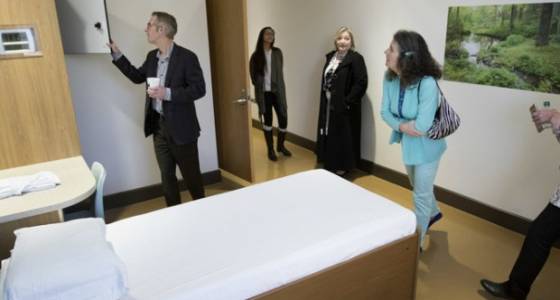 A chronic shortage of treatment facilities has put the mentally ill on Oregon's streets and in its jails in dismaying numbers. So you'd think mental health advocates would be doing backflips over the news of a proposed 100-bed psychiatric hospital in Wilsonville.

Instead, activists are lukewarm to downright hostile, arguing Universal Health Systems's  planned $35 million hospital is the wrong plan in the wrong place from the wrong company.

Universal, a for-profit, publicly traded operation, will not include an emergency room at its Wilsonville facility, which critics view as a clear signal the company intends to cherry pick the well-off and the insured as opposed to the impoverished and homeless.

Universal also has plenty of internal issues. "Clearly, this is a company with baggage," said Chris Bouneff, local head of the National Alliance on Mental Illness.

The federal government has since 2013 been investigating possible fraudulent billing practices at as many as 23 Universal hospitals. Plus, the company has been nagged by repeated questions about patient safety and other quality issues.

Universal denies that it has committed any wrongdoing. In a written statement, it pointed out  that after four years of investigation, it has yet to be accused of anything. It says the quality of its care is unrivaled and has been recognized repeatedly by outside observers.

Universal's proposal is expected to be approved or rejected by the Oregon Health Authority as early as this week.

The testy debate that has erupted over the plan reflects Oregon's long failure to adequately fund mental health. Activists  argue the state needs a network of residential treatment facilities, detox centers and supported housing, not another 100-bed hospital.

Under heavy pressure from the federal government, Oregon entered into a consent agreement in 2012 requiring the state to move away from large institutions in favor of smaller, community-based facilities. Gov. Kate Brown has proposed shutting down the new state mental hospital in Junction City before it even gets fully operational. She was motivated primarily by the state's budget crunch.

Earlier this month, four local health systems opened the Unity Center, a new 82-bed psychiatric facility in Northeast Portland. Dr. Tony Melaragno, vice president of behavioral health and oncology at Legacy Health, who will help run the Unity Center, argues that there is simply not the need for 100 new beds since his facility opened.

"The state process requires them to show that their services are needed," said Bob Joondeph, executive director of Disability Rights Oregon. "What Universal has offered is excuses for their failures in other states and an old-school model of services that is out of step for Oregon."

Universal is one of the largest for-profit hospital companies in the country. Based in King of Prussia, Penn., it earned $680.5 million on total revenue of more than $9 billion in its 2015  fiscal year.

The company already has a presence in Oregon. It owns and operates the Cedar Hills Hospital in Southwest Portland, an 89-bed psychiatric hospital. In November 2016, it submitted its application to the state to build the Wilsonville hospital, which it will tentatively call Willamette Valley Behavioral Health. If it gets state approval, Universal says it could be in business by January 2018.

Universal argues that the claims of a current surplus of psych beds is wrong. Cedar Hills, for example, turned away an average of 90 patients a month through the first 10 months of 2016 because it was operating at capacity.

A recent study on the practice of "boarding" psychiatric patients in hospital emergency roons conducted by the Oregon State University College of Public Health seems to back up Universal's claim. The study found that 9 percent of Oregon emergency room patients with severe psychiatric problems were essentially stored at the emergency room for 24 hours or more while hospital officials and family searched for an appropriate treatment facility.

Backers argue that the just-opened Unity Center will change the landscape of mental health care in the metro area. Unity will have a psychiatric emergency room operating 24 hours day which organizers expect will care for 44-55 patients a day and reduce patient boarding.

Universal's proposed Wilsonville facility will not have an emergency room.

Unity, a joint venture of Legacy, Adventist Health, Kaiser Permanente Northwest and Oregon Health Sciences University. It anticipates that more than half of its patients will be uninsured or poor enough to qualify for Medicaid.

"When you're going to add hospital beds, you have to prove there is a need," said Legacy's Melaragno. "We know we're not using all our capacity. And they're talking about adding 100 beds. That's as many as Unity, which is three different hospitals."

The Office of the Inspector General of the U.S. Department of Health and Human Services issued its first subpoena for the billing records of Universal hospitals in February 2013.

Today, there are at least two separate federal investigations, involving 25 different Universal hospitals. The case grew potentially much more serious in March 2015 when the U.S. Department of Justice criminal frauds section joined the probe. Universal was also informed the case had expanded to include the parent company.

In January, 2016, the Justice Department notified Universal that it had opened yet another investigation -- this one into potential false claim act violations at  Universal's South Texas Health System.

"The underlying conduct that may have sparked these ongoing civil and criminal fraud investigations involving the corporate parent and 23 of its behavioral health facilities should raise doubts about whether Universal is the type of provider that Oregonians can trust," wrote Service Employees International Union Local 49, in its opposition to Universal's application.

Besides possible billing violations, Universal hospitals have been the subject of repeated complaints about the quality of care and facilities.

Last March, Texas officials asked Timberlawn Mental Health System in Dallas to surrender its license and pay a record $1 million fine. In December, news website Buzzfeed issued a harrowing account of life inside Universal hospitals. Based on a reported 175 interviews with former patients and employees, the article accused Universal of systematically holding patients who did not pose a danger to themselves against their will until their insurance coverage ran out.

Universal publicly refuted the Buzzfeed article. But shareholders fled the company's stock, costing it $1.5 billion in market capitalization in a single day.

SEIU Local 49, which represents thousands of health care workers in Oregon and Southwest Washington, argues understaffing at Universal hospitals and substandard physical facilities pose a danger to patients and employees.

"Despite the alarming number and range of safety and patient care failures at Universal facilities across the country, Universal refuses to acknowledge the seriousness of its breakdowns in care and characterizes them as "highly isolated" incidents," the union said.

Universal rejects the critics and points out that it has yet to be accused of any wrongdoing. Even while the investigation has continued, many of the institutions under scrutiny have received multiple third party accolades for providing high quality patient care," the company said.