Famagusta 15°
clear sky
BUSINESS EDUCATION ENTERTAINMENT HEALTH POLITICS SCIENCE SPORTS TECHNOLOGY
10:22 Four Benefits of Hiring a Dedicated Development Team
04:48 Mark Kelly, President of Safety Marking Inc., Discusses Structuring Effective...
17:58 Trump wants to play golf at the Biden swearing-in in Scotland - but is...
17:54 First doubts Regarding tightened Steps: two National Countries Extract...
10:39 Covid-19 : in France, the end of containment and entry into force of the...
04:34 The schools of Rome will use the Internet with light bulbs: what it is...
10:58 Kratom Tea: How Is It?
11:46 Office Furniture Products for you!
12:17 Top Clubs, Their Value, Revenue And Current Standings
11:14 Reasons Why Rewarding Yourself is a Good Practice
BIST
1535
GOLD
440.728
USD
7.3969
GPB
10.0877
EUR
9.0074
Breaking News
Which Cake Flavours Do Americans Like Most?
Close 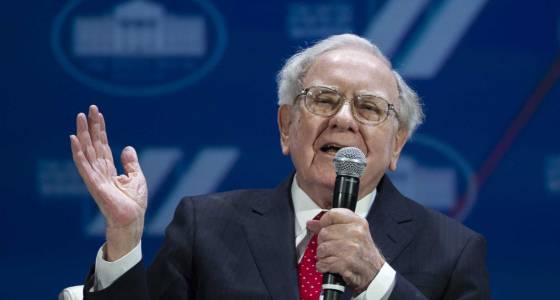 The Omaha, Nebraska-based conglomerate released its latest results Saturday along with Buffett's annual letter to shareholders.

The analysts surveyed by FactSet expected earnings per Class B share of $1.82, although they generally exclude investments and derivatives from their estimates. Berkshire said those operating earnings totaled $1.78 per Class B share.

Berkshire generated $58.3 billion revenue in the quarter, up from $51.7 billion a year earlier.

Berkshire's investments and derivatives were worth roughly $1.2 billion at the end of the quarter, up from $399 million. That overshadowed the 6 percent profit decline at Berkshire's operating businesses.

Buffett has said operating earnings offer a better view of quarterly performance because they exclude investments and derivatives, which can vary widely.

Edward Jones analyst Jim Shanahan said he didn't see many surprises in Buffett's letter. The lack of any additional details on Berkshire's plan to eventually replace the 86-year-old Buffett as chairman and CEO suggests little has changed in the company's plan to split Buffett's job into three parts: chief executive officer, chairman and several investment managers.

"A little more visibility on succession might have been helpful," Shanahan said.

Buffett has said that all the CEO candidates are managers who already work at Berkshire and understand the company's culture well. Two investment managers, who each manage about $10 billion of Berkshire's assets are in place already.

Berkshire Hathaway Inc. owns more than 90 companies, including railroad, clothing, furniture and jewelry firms. Its insurance and utility businesses typically account for more than half of the company's net income. The company also has major investments in such companies as American Express, IBM and Wells Fargo & Co.