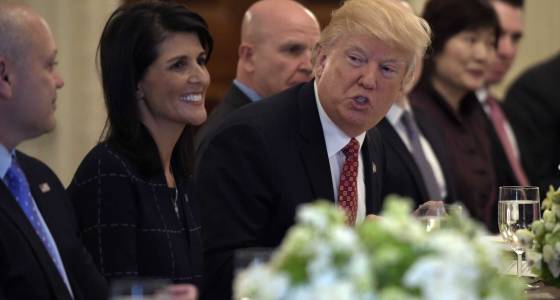 The border wall money is fiercely opposed by Democrats, whose votes are needed to pass the legislation, and they are also incensed over Trump's threat to deprive former President Barack Obama's health care law of key funds to help poor people.

Those were the most pressing unresolved issues confronting lawmakers as they returned from a two-week spring recess to face a critical deadline. Congress must pass a $1 trillion catch-all spending bill to pay for all agencies of government by midnight Friday or trigger a partial shutdown the next day, which happens to coincide with the 100th day of Trump's presidency.

The standoff echoed similar spending fights during the Obama administration when Republicans would push to "defund" Obama's health law over the objections of Democrats. Even though Republicans now control both chambers of Congress and the White House the dynamics are not all that different, given Democrats still have leverage and Republicans fear that as the party in charge, they would shoulder the blame from any shutdown.

"I'm optimistic. I don't think anybody wants a shutdown," said Sen. Roy Blunt, R-Mo., who said there are just a handful of unresolved issues on the core package of spending bills.

It's increasingly obvious the House and Senate will have to pass a temporary funding extension of a few days or more to prevent a shutdown this weekend and allow more time for talks.

"I do not think the election was a referendum on building a wall to the tune of tens of billions of dollars," said House Minority Leader Nancy Pelosi, D-Calif.

The negotiations over the spending bill took center stage despite a separate White House push for fast action to revive health care legislation to repeal and replace the Affordable Care Act. After signaling last week they hoped for a vote as soon as this week on a rewritten health bill, White House officials softened their stance Monday. Echoing the views of House GOP leaders, White House press secretary Sean Spicer said there would be a vote on health care legislation when House leaders count the 216 votes needed to pass it.

"I think we want to make sure that we've got the votes and we're headed in the right direction before putting some artificial deadline," Spicer said.

Trump and House Speaker Paul Ryan had to pull their "Obamacare" replacement bill off the floor last month without a vote as it became clear it would fail. Since then leaders of conservative and moderate factions in the House have been negotiating on a compromise allowing states to opt out of certain "Obamacare" requirements, and they appear to be making progress, although legislative text had not been finalized as of Monday.