Investors should brace for a sell-off in Canadian bonds because the country’s economy is doing better than most people think, according to BMO Capital Markets.A shift in the perception of Canada’s economic performance, which could begin as soon... 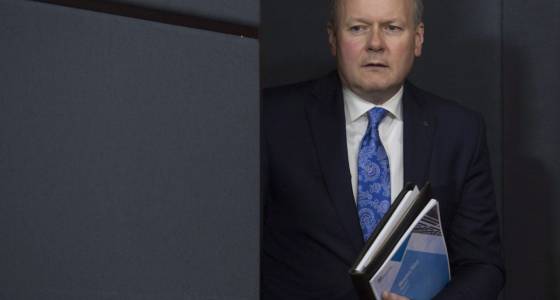 Investors should brace for a sell-off in Canadian bonds because the country’s economy is doing better than most people think, according to BMO Capital Markets.

A shift in the perception of Canada’s economic performance, which could begin as soon as April, will send tremors through the markets for government bonds maturing in two to 10 years, Benjamin Reitzes, a senior economist at BMO, wrote in a report dated Feb. 23.

“A sea change in the perceptions around Canada is coming, and the persistent bias to be long Canada could catch investors flat-footed,” Reitzes said. “The narrative remains skewed toward potential easing, and ‘when will Canada stumble?’ That’s consistently been our view as well, until now.”

Canada’s economy began its recovery from a downturn in the middle of last year after the wildfires in Alberta. The job market has posted its strongest six-month run in 15 years, BMO argues. Bank of Canada Governor Stephen Poloz will have to take account of that change too, albeit not at the bank’s next rates meeting on Wednesday.

“It’s going to be hard for Poloz to sound consistently dovish when the economy is evolving as expected, or better,” Reitzes said. “The change of tone won’t come next week, but it could come as soon as April.”

The Bank of Canada’s next rates meeting after this week is April 12.

To best protect against the sell-off, investors should unload five-year bonds or interest-rate swaps and replace them with similar-maturity U.S. securities. Another option is to sell Canada’s five-year bonds and buy the 30-year securities, which won’t be as negatively affected by the sell-off, according to BMO, a unit of Bank of Montreal.

Bonds sold off worldwide in recent months in what was the largest rout in the market for decades. Canada’s government securities outperformed as investors bet the country’s sluggish growth justified low rates. While the Bank of Canada appears on hold, the U.S. Federal Reserve raised rates in December and seeks to increase them further this year.

Canadian government bonds have lost 0.3 per cent since the end of October, compared with a 1.8 per cent loss for U.S. Treasuries and a 4.4 per cent decline for government bonds worldwide, according to a Bloomberg Barclays index. There’s about a 24-per-cent chance the Bank of Canada will increase rates by the end of the year, according to overnight index swaps data compiled by Bloomberg.

“The consensus among economists remains that the next hike is a long way off, and markets have been consistently more dovish than the economist view,” Reitzes said. “Both factors suggest there’s room for a deeper sell-off.”