Are the Charlotte Knights still planning a multistory office building next to BB&T Ballpark?

The Charlotte Knights are adding more coverings and making improvements for fans at BB&T Ballpark in preparation for their fourth season, and they’re also still looking at how to develop land next to the field.Charlotte Knights Chief Operating Officer... 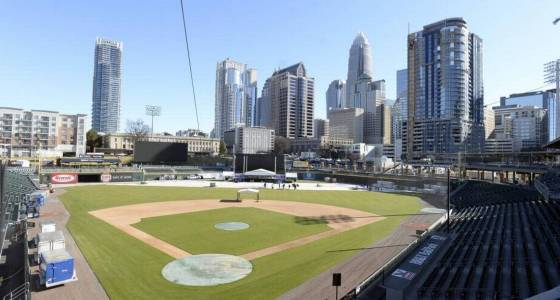 The Charlotte Knights are adding more coverings and making improvements for fans at BB&T Ballpark in preparation for their fourth season, and they’re also still looking at how to develop land next to the field.

Charlotte Knights Chief Operating Officer Dan Rajkowski said the area on the northeast side of the ballpark, adjacent to Fourth and Mint streets, is still in play. In 2015, the Knights said they were planning to develop a six-story office building on the site, but since then it’s been quiet as they largely focused on the field and the fan experience at the ballpark.

“It’s still moving along,” Rajkowski said Friday. “We’re working with some folks to design it, as this building boom has happened.”

Since the Knights started looking at developing that corner of their site, the area around them has already changed drastically. A block away, the Kimpton hotel and 300 South Tryon office tower are wrapping up construction later this year. The Ascent apartment tower is nearing completion, at Third and Poplar streets. And a slew of other office buildings and hotels is preparing to open in the coming months across uptown.

Rajkowski said the Knights are working with consultants to analyze the market and make sure an office building still makes sense for the site. The building would include a rooftop terrace, along with restaurant and dining options on the ground floor that baseball attendees would be able to use.

“We’re still looking at office, but with everything that’s grown around us, we want to confirm that’s the highest and best use,” said Rajkowski. “We want to get this right.”

“The goal is to get it going as soon as we can, and it may be phased,” said Rajkowski. The county owns the land, which the Knights lease for $1 a year. The building would also have to be constructed around the baseball season and other events at the ballpark.

“The challenge is playing baseball around construction,” said Rajkowski. “It’s a little more challenging than some projects.”

Here are the changes you will definitely see soon at BB&T Ballpark: Better group seating options. An extended awning will be installed in time for opening day at the Piedmont Natural Gas Picnic Area in left field, covering more of the area and providing sun and rain protection. In right field, the Miller Lite Rooftop Party Zone is getting a new covering as well, with a 40-foot-by-40-foot enclosed structure.

“It’s for the comfort of our fans,” said Rajkowski.