Galleries Videos CONTACT ADVERTISE
Famagusta 23°
few clouds
BUSINESS EDUCATION ENTERTAINMENT HEALTH POLITICS SCIENCE SPORTS TECHNOLOGY
12:08 Guide To Online Sports Betting: How To Choose A Sportsbook
08:28 What Are Some Reasons to Consult a Brain Injury Lawyer?
09:24 Blockchain Solutions for Enterprises: How To Increase Efficiency And Profitability
07:06 How To Deal With A Car Crash In New York
17:43 Tips to keep in mind while choosing the casino site
11:34 Relation Between Employee Theft and Pre-employment Screening Check
04:37 Search your own desired site to play sports for betting
18:00 Top 3 Career Path Options for Business Analysts Preview
15:35 The history of Imen Jane, who is the influencer and the charges on the...
18:48 Sebastian Vettel's Greatest Races
BIST
1124
GOLD
458.727
USD
7.6460
GPB
9.7703
EUR
8.8844
Breaking News
Top 3 Career Path Options for Business Analysts Preview
Close

A two-year quest began after Jim Oberweis, the father of dairy CEO Joe Oberweis, picked up a bottle of the family's milk at a grocery and noticed it tasted funny.Not bad, or spoiled, but just not quite right. So began Oberweis Dairy's work to determine... 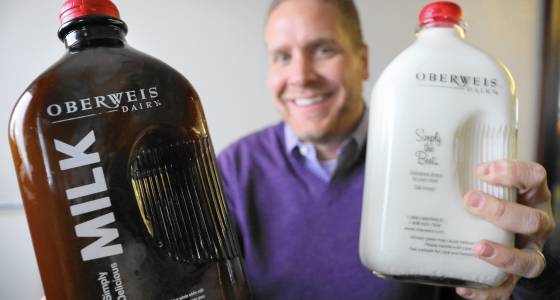 A two-year quest began after Jim Oberweis, the father of dairy CEO Joe Oberweis, picked up a bottle of the family's milk at a grocery and noticed it tasted funny.

Not bad, or spoiled, but just not quite right.

So began Oberweis Dairy's work to determine why its glass-bottled milk sold in grocery stores didn't taste as good as the milk sold in its own stores or delivered to customers' doorsteps.

Turns out the problem is light.

The milk sold in those well-known clear glass jugs can taste different as it sits in a lighted refrigerator in a grocery store, Joe Oberweis said.

The company tested a number of different options — storing the bottles behind frosted or painted glass, and covering the bottles with plastic labels. It asked grocers to use an amber filter in their refrigerators. It also tried blocking the light by asking stores to install solid refrigerator doors instead of glass — the grocers would have none of it.

In the end, after many tests, Oberweis and his team took a page from the way brewers preserve the taste of beer — using amber glass to protect it from light.

"The overwhelming theme is how do we make sure that Oberweis milk tastes the way we expect and want," Oberweis said. "By protecting it from light in all instances, we eliminate the problem."

In mid-March, the company will begin shipping the amber glass milk containers to grocery stores. Milk sold through home delivery and in the company's retail stores will remain in clear glass bottles.

The fluorescent or, increasingly, LED light that groceries use can be hard on milk, according to Bryan MacKenzie, director of quality at Berlin Packaging, a producer of amber glass and other packaging products that is not working with Oberweis. Amber glass' ability to filter out certain wavelengths of light is beneficial to the product, he added.

Sales of glass and amber glass have been inching up in recent years, MacKenzie said.

Time to step it up, people.

Americans are eating less ice cream, according to an unsettling new study from market research firm Mintel. While some 92 percent of households bought frozen treats in the past six months, 22 percent indicated they're cutting back on the quantity purchased, mostly for...

Time to step it up, people.

Americans are eating less ice cream, according to an unsettling new study from market research firm Mintel. While some 92 percent of households bought frozen treats in the past six months, 22 percent indicated they're cutting back on the quantity purchased, mostly for...

The true test, however, is whether consumers accustomed to clear containers will take a liking to the darker glass. Oberweis executives "are taking a leap," said MacKenzie. "It's the right thing for the consumer, but can they explain why?"

The cost to switch from clear to amber glass "is a few pennies," he said.

There are no guarantees the amber glass will boost Oberweis' position in the milk market, particularly since sales of dairy milk has been declining in recent years as consumers have turned to milk alternatives, such as almond, cashew and hemp milk, according to industry statistics.

Consumption of dairy milk has been declining for the past 40 years, according to a Journal of Dairy Science study. Still, with butter's resurgence and the popularity of other milk-based products such as ice cream, the industry isn't at risk of petering out.

Oberweis declined to provide sales figures, but said sales have been "flat to up" in the past few years. Industrywide, sales of nonorganic milk rose 4.8 percent in the last year compared with the year before, while higher-priced organic milk sales climbed 16.5 percent in 2016 from the year before, according to estimates from the U.S. Department of Agriculture.

"If it is a little unusual, my guess is that two years from now it's not going to feel unusual at all," he said.