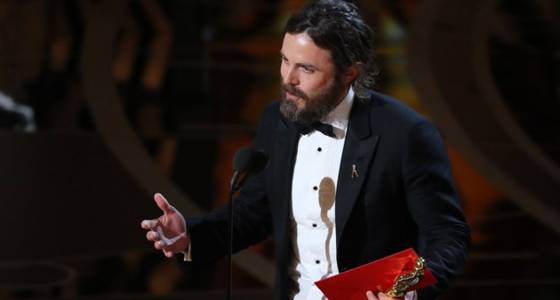 After upending television with acclaimed online series, Amazon and Netflix joined the ranks of the film industry's elites with four gold statuettes between them.

Amazon Studios, a unit of e-commerce giant Amazon.com, scored a best actor trophy for Casey Affleck's portrayal of a grieving man in "Manchester by the Sea." The movie also won best original screenplay.

Amazon's other accolade came for best foreign language film for Iranian drama "The Salesman," which Amazon distributed in the United States and Canada.

Netflix triumphed in the documentary short-subject category for 40-minute film "The White Helmets," a look at rescue workers in war-torn Syria.

But A24, a small independent studio founded in 2012, won the most prestigious award of the night with its best picture Oscar for "Moonlight," a drama about a gay black youth coming to terms with his sexuality in an impoverished Miami neighborhood.

The movie was produced for $1.5 million, a tiny budget by Hollywood standards.

The filmmakers thanked A24 for taking a chance on the coming-of-age tale.

"It was outside the model of what a movie should be, in terms of return on investment," producer Jeremy Kleiner told reporters backstage. The Oscar victory "hopefully creates some incentives to make movies like this," he said.

"Moonlight" had brought in $22.3 million in domestic ticket sales through Sunday, the smallest take among the best picture nominees, according to comScore data.

For Amazon and Netflix, the accolades provide bragging rights they can use in marketing to help win customers to their subscription video services.

"It will make them a must-subscribe destination for film fans," said Paul Dergarabedian, senior media analyst at comScore.

Amazon paid $10 million for "Manchester by the Sea" at the Sundance film festival. The movie has earned $46.8 million at domestic theaters, and will appear later this year on Amazon's Prime Video service.

Among all studios, Lions Gate Entertainment Corp took home the most trophies including six wins for musical romance "La La Land" and two for "Hacksaw Ridge." Walt Disney Co won four including best animated feature for "Zootopia" and best documentary for ESPN's "O.J.: Made in America."