Copenhagen Police on Friday night charged by the holder of a vandpibecafé to stay open and 23 guests who had gathered at the café, for violating the forsamlings 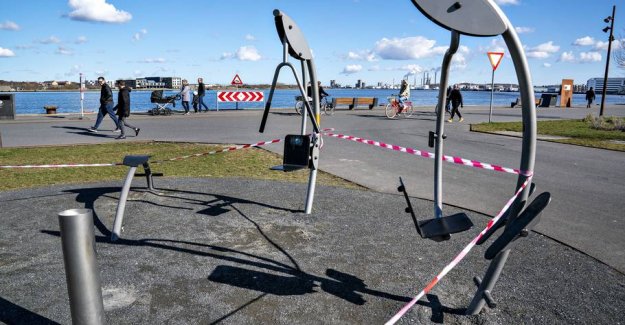 Copenhagen Police on Friday night charged by the holder of a vandpibecafé to stay open and 23 guests who had gathered at the café, for violating the forsamlingsforbuddet. They will all get fines.

on Wednesday entered the new rules in force to contain the corona virus and the means, among other things, that you must not be meeting more than 10 people.

in Addition, among the restaurants, taverns and other places where people meet socially, keep closed.

But on a vandpibecafé in Copenhagen's Northwest area was, according to the police on Friday evening gathered 23 persons.

The 23 were charged with violating the forsamlingsforbuddet, while holder was charged to stay open despite the ban.

- They will now receive fines, writes Copenhagen Police on Twitter.

the Police went out to vandpibecaféen after a review that there was a people gathered, and informs the Copenhagen Police's communications department.

When the patrol arrived, so vandpibecaféen out to be closed, but the officers could clearly see that there were people in there.

Also in Odense moved to the police on Friday evening out with bødeblokken, then a tavern kept smugkro in the back room.

It happened also after a tip, and in værtshusets back room were served to several guests.

Holder was charged with keeping open in violation of the rules and can look forward to a fine.

According to the times.dk, there were six people total, so they violated the rules that you are not allowed to congregate more than 10 persons.

Bødetaksterne is 1500 crowns for each person who participates in a gathering of more than 10 persons, and 5000 euros for the business, which defies the prohibition against keeping open.

on Saturday reinforced the police and municipalities in several places in the country, monitoring whether people comply with the new rules and not be gathered in spite of the good weather.

the 14-time reads the message from several police districts, that people do not congregate, to keep a good distance to each other, and that it has not been necessary to hive bødeblokken forward.