UEFA put the lid on the corona and scandals

AMSTERDAM (Ekstra Bladet): the Dav with you, mate! DBU president Jesper Møller, was in fine company, when he, as a member of UEFA's executive committee took 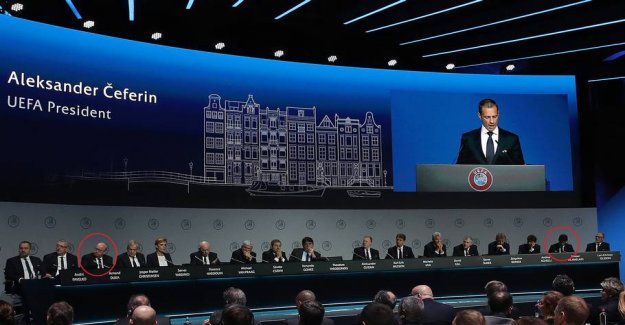 AMSTERDAM (Ekstra Bladet): the Dav with you, mate!

DBU president Jesper Møller, was in fine company, when he, as a member of UEFA's executive committee took its place on the stage in the congress hall Beurs van Berlage in Amsterdam.

Here he sat, among others, with the PSG president, Nasser Al-Khelaifi, who is facing a possible prison sentence in Switzerland in a serious corruption case.

After more than three years of investigation traveled to the swiss public prosecutor's office 11 days ago, a criminal case against Al-Khelaifi. The man from Qatar sits in the UEFA's executive committee on a mandate from the ECA, the association of european clubs.

Al-Khelaifi is accused of having encouraged the FIFA secretary general, Jerome Valcke, to commit criminal acts in return for TV rights in Italy and Greece to the WORLD cup finals from 2018 to 2030.

It was all in the congress hall in Amsterdam knowledgeable about, but none of the fine people at UEFA will talk about the hot potato. Nor Jesper Møller, who in an interview with Ekstra Bladet would rather discuss whether Al-Khelaidi is charged with, accused of or charged instead to relate to the current question: Should Al-Khelaifi at all be present?

Jesper Møller would rather clap, of the Ceferins talk than talk about football scandals. There was clapping he in place in. Photo: Yves Herman /Reuters/Ritzau Scanpix

After a long holmgang reached the lawyer Jesper Møller forward to, that now we must wait to see what the swiss legal system when forward to. The same answer we got from UEFA's president, Aleksander Ceferin.

Nor does the fact that FIFA for their party has listed Al-Khelaifi in the very same case can excite the Turbines up. FIFA was in december informed that the swiss public prosecutor's office would raise a criminal case.

It was at the end of January FIFA to respond. Associated announced that it had entered into an unspecified, ’amicable agreement’ with Al-Khelaifi. As a consequence, FIFA dropped its own criminal charges against the PSG president.

according to the british newspaper, The Times, Al-Khelaifi paid FIFA more than seven million dollars to drop out of the case.

Jesper Møller reaction is that you probably had not done it that way in Denmark.

– We must just recognize that we are in a verge of being, where one is operating with different standards, slipping Jesper Møller of.

And that was how it was all the way at UEFA's congress in the Dutch metropolis. All went outside on the hot potatoes, which is also UEFA's decision to exclude Manchester City in the two years from the Champions League for a breach of the rules on Financial Fair Play.

The case has the arab-owned English team appealed to the international court of arbitration for sport, CAS, and the fact user Jesper Møller and the other committee members not to comment on the matter. Again, we must wait to see. To Manchester City's owners have threatened to sue UEFA all the way into hell, will also executive committee to respond.

the Man felt a distinct reluctance to take a position to the current problems. Coronavirussen, which can smash the most of the spring season in european football, would you rather not relate specifically to the.

Aleksander Ceferin was in the closed eksekutivkomitemøde Monday have stated that the panic around coronaen is worse than the virus itself.

His desire to discuss the matter down must of course be seen in light of the fact that european football today is a huge industry which has a turnover of billions of dollars each and every week.

Cancelled matches or matches played without spectators is a nightmare, and now what with the european football championship in June, which should be conducted in 12 cities in 12 different countries? The tournament is also in danger?

No clear answer, we were not, but both Ceferin and UEFA general secretary Theodore Theodoridis, however, could be pressed to say that working with alternative solutions, if not EM can be settled as planned.

What it involves, they would not say. So one can only guess at whether the reflection goes on to play the tournament without spectators or to move the entire event to a single country.

But let us now be positive, said Ceferin.

See also: Corona-cancellations on the strip: Here fail the sport