The funeral director will livestreame funerals

It is a difficult time right now. And extra difficult for those who lose a loved one. - The caregivers are very friendly. Today we had a funeral of a young ma 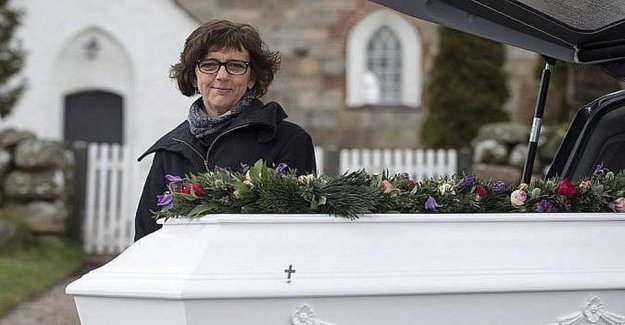 It is a difficult time right now. And extra difficult for those who lose a loved one.

- The caregivers are very friendly. Today we had a funeral of a young man at 49 years old. When you are in the age, so one has many relatives, tell the funeral director Henriette Plougmann Thomsen to TV2 Østjylland.

She is the holder of the Ecomuseum Funerals and Blomstergalleri, which is a familivirksomhed, she runs with her father, sister, and daughter.

the Rules in connection with the corona-virus must also be observed in the churches. Therefore, there are many who must be away from the funerals and funeral services. It saw the three siblings, Michelle, Helena and Michael, since they had said goodbye to their mother.

But on Saturday morning, got Henriette Plougmann Thomsen and her daughter Maja an idea.

- We will offer to livestreame from burials and funeral services. We begin already in the next week, she says to TV2 Østjylland.

In the next week, they have five funeral services, and the relatives have taken really well against it, she says.

- In relation to the five funeral services in the next week, so it has been a glaring hurrah, says Henriette Plougmann.

In these times are being made to the exceptions, among other things in relation to taking pictures in the church, and you have to think differently, believe the undertaker.

- We try to think out of the box. We have not heard anything other than positive reactions from the priests we have spoken with.

in practical terms, then they will put a camera up in the church, and share livestreamingen via an app, where the relatives will get sent a link.

- We respect of course, if not all, who think it is a good idea. So we will not make it, tells Henriette Plougmann Thomsen.

Just for the time it is not easy, when she as a funeral director should be out to the families who have lost a family member or a close friend.

- When you need to download one of the hjemmedødsfald, so looks like you are from Mars. You have mundbind, gloves and suit on. It hurts to stand over for a family such, says Henriette Plougmann Thomsen.

Several funerals also choose to take conversations with families over the phone, but it can Henriette Plougmann not.

- You have to take precautions. I still take out for conversations, but I keep a good distance and spritter always of. I can't do it over the phone, she says.

But if the relatives are most comfortable with a conversation over the phone, so she does of course like it.

the Ecomuseum Funerals & Blomstergalleri has offices in Ry, Silkeborg, Viborg, Bjerringbro and Washer. They run around in the whole of Nsw.