Up to 10,000 employees can expect in return from the SAS as a result of the crisis, the spread of the coronavirus has created for the airline. this was stated 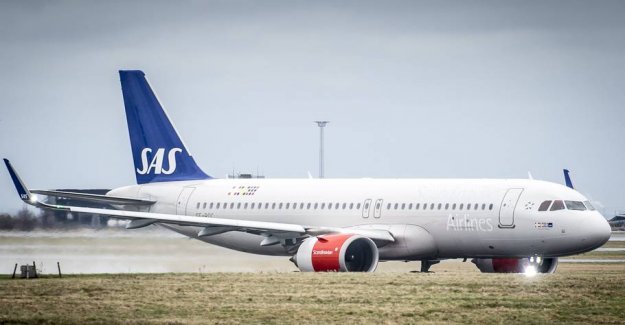 Up to 10,000 employees can expect in return from the SAS as a result of the crisis, the spread of the coronavirus has created for the airline.

this was stated by The ceo of SAS Rickard Gustafsson on Sunday at a news conference.

This is equivalent to approximately 90 percent of the company's total workforce.

In Denmark, SAS has 4200 employees, and according to the ceo of SAS Denmark, Simon Pauck Hansen will 4000 of them sent home, he said to DR.

It happens according to the Danish boss without a final resolution on pay.

- We have proposed a reduction in wages for our workforce, and we need to look ahead at how we'll put the pieces in place.

- We welcome the proposals which are laid on the table from the government. How exactly will implement it, we must return to, he said to DR.

in Addition, the SAS strongly reduce the number of flights.

- the Demand for tickets has disappeared both in and out of countries. We must adapt ourselves to the situation. We reduce significantly the number of departures, says the managing director of SAS Rickard Gustafsson at the press conference.

The next few days will flights be maintained so as to ensure that passengers can get home. Then will only the critical infrastructure to be maintained, says the director.

The Danish chief deepens over for the DR, that you will sustain critical flights, so health professionals for example can get around in the country.

In a press release, which are issued in connection with the press conference, informs SAS that they implement these measures with the aim to be able to return to normal operation as quickly as possible.

the FACTS: the SAS is born as a scandinavian cooperation project

SAS has Sunday announced that up to 10,000 employees will be sent home, temporarily, when the airline is hard pressed by the coronavirusset, which has meant a massive fall in the number of ticket bookings.

* SAS was founded in 1946 by a merger of national airlines in Denmark, Norway and Sweden.

* the First trip went to New York 17. september 1946. The trip took 25 hours, and it was necessary to make three stops on the way to thought.

* today, SAS has more than 800 daily departures. The company flies about 30 million passengers per year to over 125 destinations in the world.

* Sweden and Denmark owns 29 percent of the shares in SAS. Earlier, the Norwegian state has also been a shareholder.

Sources: the SAS and the news agency Ritzau.