Police: How was million from the hash sales on Christiania washed white

dirty money from organized hash sales on Christiania was invested in kolonihavehuse, istandsættelser and cars were washed white. It takes the police, who have 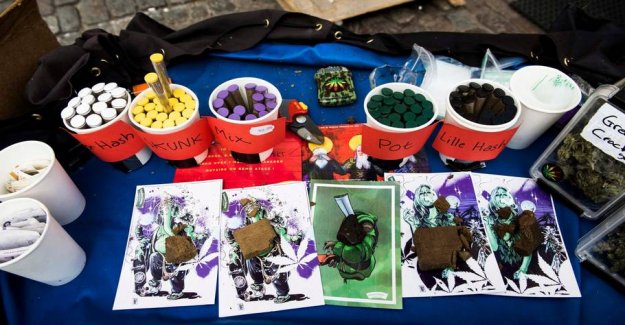 dirty money from organized hash sales on Christiania was invested in kolonihavehuse, istandsættelser and cars were washed white.

It takes the police, who have been indicted for receiving stolen goods against a 37-year-old boyfriend to a 39-year-old convicted marijuana-trades as well as a 52-year-old man. He has, according to the indictment, helped the hash-sentenced to run at least one and a half million dollars through his bank account over the course of two years.

The total amount, which the police believe that the defendants have laundered, is barely 4,5 million kr.

The defendants refuse to commit. The trial running over three days this week by the Copenhagen city Court.

the Case stems from a large sagskompleks with the eight defendants, as previously determined.

The 39-year-old was then four years in prison and received the verdict, while a now 57-year-old former Hells Angels-rocker was sentenced to three years in prison for the sale of at least 120 kilos of hash from the two hash-stalls of Pusher Street.

A 55-year-old full-fledged Hells Angels rocker, in the Copenhagen city Court was given four years in prison, was acquitted when the case was appealed to The high Court.

the Evidence was based among other things on the 'personaflytning', where the police had installed a secret microphone on one of the defendants, probably in his shoes.

the Police intercepted, among other things, a 10 minutes long conversation between the two HA-rockers and the convicted 39-year-old. The high court found that the interception was proof enough to judge the 55-year-old HA-rocker.

The 39-year-old had his conviction 29. June 2018, but back then there was no time for bevisførsel about the confiscation of the money, which he allegedly earned by hash-sales.

the district Court must now rule on the custody, while the police are running the money laundering case against his 37-year-old girlfriend and the 52-year-old friend.

According to the indictment, purchased the 52-year-old a kolonihavehus in Dragør for 850.000 kr. and was the registered owner of a VW Multivan and a Mercedes E350, even though the house and the cars, according to the police, actually belonged to the 39-year-old hash-convicted.

His 37-year-old girlfriend got renovated its residence on Amager 523.500 kr. and a kolonihavehus in Kastrup for the not under be 1,110,000 kr., reads the charges against the woman. It was her boyfriend who paid the bills.

the Woman also bought three Mercedes cars during the course of just three months in 2016.

She started with a Mercedes ML63 AMG for half a million dkk. and made it part of a later purchase of a Mercedes CLA220 CDI st.car to 585.000 kr.

Just three weeks later bought a Mercedes E350 to 640.000 kr. and let again the other Mercedes be included in the deal.

It came to pass, as the indictment says, 'even if she knew, or certainly suspected, that the money for materials, labor and the purchase of vehicles arising from criminal offences, including organised hash-sales at Chjristiania'.

During the trial, police require three memberships of haveforeninger on Amager confiscated along with two cars, a Mercedes and a VW Multivan, a Rolex gold watch, a gold ring and 8000 kr. in cash.

the Police will leave it up to the right to estimate, how large a dividend, shall be confiscated from the convicted hashhandler.