Here is the winner of Dansk Melodi Grand Prix

It should have been a hell of a party in the Royal Arena Saturday night, where the DANISH settled the Danish Melodi Grand Prix for 50. time. But the jubilee y 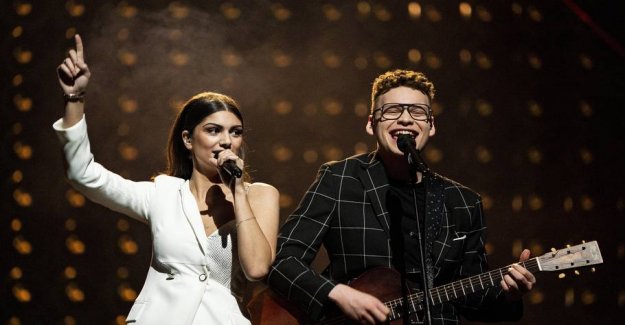 It should have been a hell of a party in the Royal Arena Saturday night, where the DANISH settled the Danish Melodi Grand Prix for 50. time.

But the jubilee year was a bit of a damp squib, with 15,000 empty chair seats in the gigantic arena because of coronavirussen, which, as we have put a stop to gatherings of over a thousand people.

DR tried to put the time in Grand Prix-the party with dåseklap in large quantities, but the påduttede good mood seemed mildly out of place in the show, as the hosts, Hella Joof and paul rudd, struggling to keep afloat.

It was also a somewhat special situation, since Ben & Tan was named as the winner of the Danish Melody Grand Prix 2020. Felt Royal Arena really empty. There was no cheer went up, which is normally beats down over the winner of the musikdysten.

See also: wallowing in the offer

It was the viewers and a selected musikjury, who collectively decided that it is Ben & Tan , who will represent Denmark at the Eurovision Song Constest in may - if coronavirussen allow it.

With 50 percent of the vote each determined the viewers and musikpanelet consisting of P3-host Pelle Peter, Cutfather, Ida Corr, Pilfinger (and painter Nicolai for young people", to the three superfinalister was Ben & Tan, Emil and Sander Sanchez.

The three superfinalister song of their contribution yet again, and so was all the power left to the viewers.

at Home in the living rooms it was really the Ben & Tan, which was the most popular and can call themselves the winner of the Danish Melody Grand Prix 2020.

the DR had announced that 2020 should be the year where the music once again really had to be in the center of Melodi Grand Prix. They had even hired livebandet The Antonelli Orchestra, as many probably know from the 'dancing with the stars', but rarely have tomgangssnak and long interviews filled so much in a Grand Prix - and even in a jubilee year, where there could probably be pulled a single classic or two out from hiding more than a few minutes at the end.

Arthur and The faint-hearted - 'The only goth in Vejle'.
Text and music: Timo Mastrup-Andersen