French star thrown out for cheating

The large stage races Paris-Nice was a brief pleasure for Warren Barguil. The French champion was disqualified after 1. stage Sunday, after he was come into t 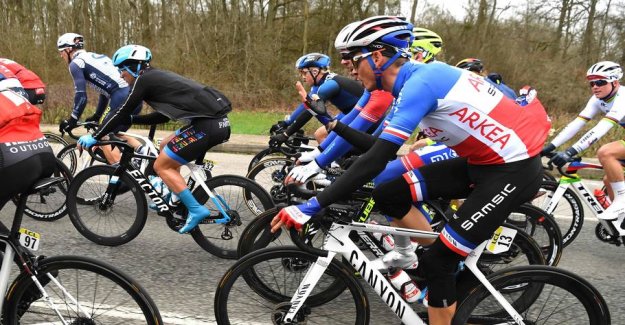 The large stage races Paris-Nice was a brief pleasure for Warren Barguil.

The French champion was disqualified after 1. stage Sunday, after he was come into the goal barely a quarter of an hour after the winner, Bora-Hansgrohes German sprinter Maximillian Schachmann.

Even though he was so far behind, he had got too much pace to get back to the field after a crash a good 60 miles from the target, assessed løbskommissærerne.

Here crashed the popular frenchman in a roundabout on the rain-soaked roads, and he continued with obvious pain.

Warren Barguil looked like several times a man who would be deleted. Photo: Alain Jocard/AFP/Ritzau Scanpix
A holdbil from Arkea-Samsic was ready to give him shelter in the effort to come back to the field, but shortly after had to be the 28-year-old frenchman to stop.

He looked like someone who was about to stand, but he was obviously just upset with the motorcycle with the tv photographer, who had followed him close.

He got on the bike again and got the card after the contact with a group that was put in sidevinden of the main panel, and he came together with the goal - only to be disqualified.

Barguil, who this year has shown that he is in good form, enjoyed great popularity in France, when he in 2017 won two stages in the Tour de France and at the same time capturing the race's jersey. The skills could have benefited the team, providing with Nairo Quintana as a captain in the week-long French race.

Monday, the riders - minus the Barguil - out on a relatively flat stage on the 166,5 km from Chevreuse to the Chalette-sur-Loing.

It will, however, probably not until Wednesday, that is seriously happening stuff in the standings. Here the riders through a 15-km long individual time trial with a few demanding climbs.

See also: Riis will not be guided by coronafrygt: - It does no good to panic