Nekropolissen Sakkara was well attended last Thursday, when the pyramid Djoser reopened to the public. It is the oldest pyramid in Egypt, and it may thus be d 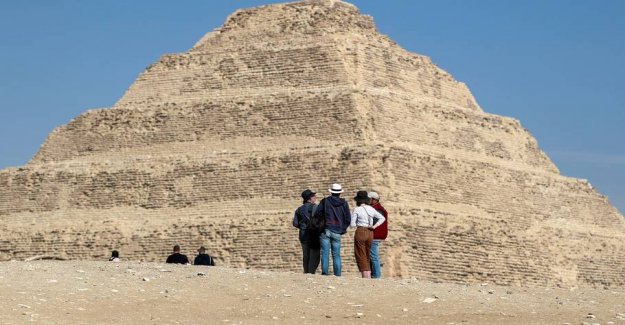 Nekropolissen Sakkara was well attended last Thursday, when the pyramid Djoser reopened to the public.

It is the oldest pyramid in Egypt, and it may thus be dated to around 2700 years before our era.

At the opening was, among other things, the Egyptian prime minister Mostafa Madbouly, which was to open the pyramid for visitors.

- This project is in conjunction with other projects within archaeology one of the country's mega-projects. Egypt would like to preserve our heritage, and it is one of our top priorities, said Madbouly at the press conference.

the Restoration has taken 14 years and cost the lives of 104 million egyptian pounds (43,7 million).

Egyptian prime minister Mostafa Madbouli after the press conference at the opening of the Djoser pyramid. Photo: Mohamed el-Shahed / AFP

the Pyramid is located in Sakkara, outside the former royal capital of Memphis. The pyramid is part of the Unesco world Heritage site.

It was built by the pharaoh Djoser, who ruled from around 2700 years before our era. He got the first name Djoser 1000 years after his reign. He was originally called Netjerichet and was the second pharaoh of the third dynasty in ancient Egypt.

the Restoration started in 2006 but was interrupted in 2011 and 2012 due to the arab spring and president Hosni Mubarak's renunciation of power.

A man walks around in the newly-opened pyramid in Sakkara. Photo: Mohammed El-Shahed / AFP
See also: Instagrammer in jail to climb the pyramid

the Pyramid, which is built up as a stairway, has been removed damaging salt from the surfaces. Blocks of stone, which was loose, has been restored and the gaps between facadeblokkene been filled with the same material, which was used in the original construction of the building.

the Tomb and its corridors are also restored. According to the egyptian media, Al-Ahram became a part of rubble from the tomb removed, which revealed several sarcophagi of granite.