Denmark thanked no to thousands of coronatest from south Korea

A south Korean official approached two weeks ago to the Danish authorities, and offered to convey the sale of coronatest on behalf of the four major south Korea 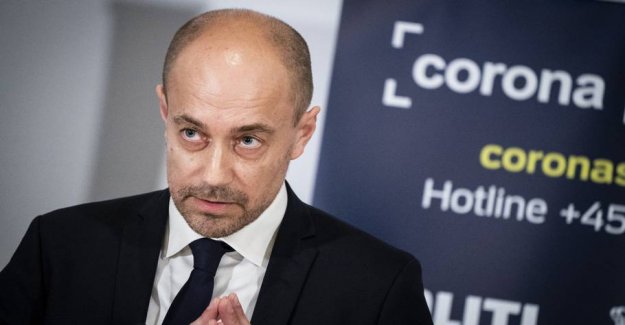 A south Korean official approached two weeks ago to the Danish authorities, and offered to convey the sale of coronatest on behalf of the four major south Korean producers.

the Manufacturers would, in a short time be able to deliver thousands of approved test kits, but thanked no.

Director of the organization, the Korea Trade-Investment Promotion Agency SangHwan Kim, under the jurisdiction of the South korea embassy in Copenhagen, confirms to the inquiry from south Korea to London.

He says, that there was talk about the EU-certified suppliers, and that the south Korean manufacturers in a short time would be able to meet 'any demand'. But Denmark was not interested.

This despite the lack of testing equipment in Denmark, among other things, has scored several regions to stop coronateste health professionals, and that many people with symptoms of coronavirus have been denied testing.

- the Answer from the Danish authorities was that they had the 'situation under control', and I got the clear impression that the Danish capacity was fully adequate. The contact person got my number and would call back if the situation changed. I have not heard anything yet, says the director for Berlingske.

south Korea has been successful in slowing the spread of the infectious coronavirus by testing hundreds of thousands of citizens. In Denmark, the government and the authorities several times changed the test strategy.

First of all, who had been on holidays in specific countries, tested. So should only those with the worst symptoms of the corona tested. Sunday was the testing strategy changed again.

Henceforth, all with suspected moderate to severe coronasmitte be tested.

so far 12.351 persons have been tested for the coronavirus in Denmark. The authorities have tested on a daily basis anywhere from 200 to nearly 1200 persons, according to the latest monitoring report from the State Serum Institute.

For comparison, the health authorities in Norway tested one percent of the population.

Ekstra Bladet has tried to get a comment from health minister Magnus Heunicke, but this has not been possible.

Opposite TV2 informs the minister that the Danish authorities are working to 'obtain testkapacitet'.

- We have contact to very large Danish companies, who are ready. What they need from the authorities, they get, says Magnus Heunicke.