China's economy bleeds as a result of coronavirussen

China's economy has been an extremely hard blow as a result of the outbreak of the coronavirus. This writes the news agency Reuters on the night of Monday Da 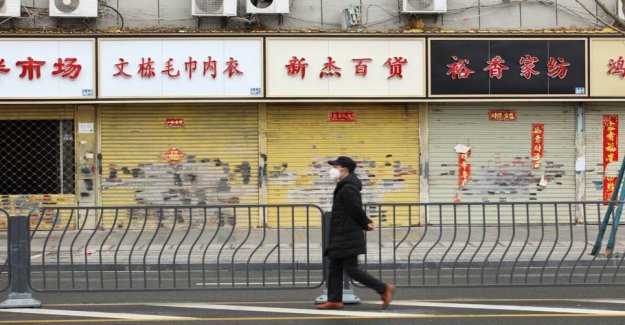 China's economy has been an extremely hard blow as a result of the outbreak of the coronavirus.

This writes the news agency Reuters on the night of Monday Danish time.

The infectious coronavirus and the tough restrictions that have been introduced to limit the infection has affected the world's second largest economy tremendously.

Industrial production in China has decreased in the highest pace in 30 years during the first two months.

the Production in the chinese industribranche has fallen by more than 13.5 percent in January and February compared with the same period the previous year.

the Industry is so down to the lowest level since January 1990, when Reuters began to measure industrial production in China.

And it is a drastic change compared to the growth in the industry in december at 6.9 percent, according to the chinese authorities ' data.

in Addition, is also an investment in the urban areas and sales in the retail sector have fallen drastically for the first time ever, the ago has begun to measure development.

In China, more than 80,000 people have been infected with corona virus since december. Which is more than 67,000 subsequently declared healthy again, while the virus has claimed the lives of more than 3000 chinese life.

Chinese officials said last week that the virus has already passed its culmination in China. But analysts warn that it may take several months before the economy can return to normal.

And after that the virus has spread rapidly all over the world, is the fear of the measure of a global recession, which will also put a damper on demand for chinese goods.

had Previously analysts estimated that China's economy would quickly be able to get back on their feet, like after the outbreak of sars in 2003-2004.

But the outlook is no longer realistic, estimates by analysts, after the outbreak of the corona virus is escalated further.

It is due to, among other things, to the many shops that had to close down during the chinese new year in January, has been unable to reopen due to the strict travel restrictions in China, and that millions of chinese have been in quarantine.