12 Arriva drivers from Nykøbing Falster, has on Wednesday morning resumed work, after a solution is found to a conflict on the drivers ' safety during the coro 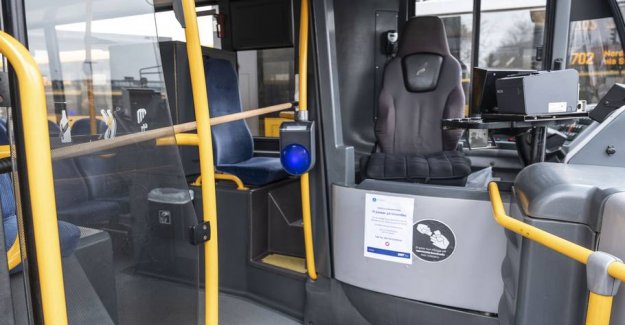 12 Arriva drivers from Nykøbing Falster, has on Wednesday morning resumed work, after a solution is found to a conflict on the drivers ' safety during the coronakrisen.

The staff had from the morning parked the buses and refused to take the hole on today's portion of the trips.

the Reason for the staff's frustration was according to Ekstra Bladet, the in soon two weeks have been calling for initiatives from the management, so the risk of the spread of the dreaded coronavirus was reduced. And then not the drivers themselves risked becoming ill.

the Drivers thought that they already draft guidance was sufficient.

Specifically, the issue in particular focused on the fact that the staff wanted gloves and rubbing alcohol to your hands, as long as it is still unclear whether the infection can be spread through the handling of cash. And just cash payment is still an option in the local buses in Nykøbing Falster.

Chaufførstrejken reached only to last for four hours, before the management had obtained håndsprit and gloves to the drivers. Photo: Per Rasmussen

Ekstra Bladet learns that arriva's områdeledelse have given the drivers the impression that it has been difficult to obtain håndsprit. The explanation is backed up by Pia Hammershøy Splittorff, who is head of communications at Arriva.

She says that Arriva has so far tried to find a solution for the bus drivers all over the country and therefore have not had the focus on the situation completely local.

- In the Arriva, we have explored the market from a variety of suppliers and have a while ago put a larger order to håndsprit. But the demand makes it not possible right now to obtain these things in such large quantities that we need. It is simply sold out, she says.

The explanation has not, however, asked the Station-the drivers satisfied. The situation reached an impasse and ended up with a number of city buses did not come out to run.

the Dispute about håndsprit has lasted for two weeks. Photo: Per Rasmussen

There were, however, not go more than four hours, from the drivers did work, until there was given a bottle of håndsprit and a set of gloves for each bus driver.

- On-site managed today to find some ekstrahandsker at the workshop that could be used, like that in a local store was a smaller amount of håndsprit on the shelves. And it got the drivers supplied.

- It is the expression of, we have local employees that have acted pragmatically in the situation they were in. It is not that we suddenly can get gloves or håndsprit in large quantities with short notice – for this we can not say Pia Hammershøy Splittorff.

Authorities have called for the initiation of actions which may limit congestion in the public transport system in order to prevent against the new coronavirus.

the Customers informed about the that can be expected to be passing by stops in the case of a preparation for the overcrowding. Rejsegarantiens force-majeure clause means that taxaregninger non-refundable.

the Movia has therefore called on the busoperatørene - including Arriva, to include more than approx. half of certain normal passenger capacity in order to avoid that the customers are standing too close.

In the short-term monitors Movia situation and have the opportunity to a limited extent to insert the extra buses, where the need may be present.

in Order to keep distance to each other and thus fit in both clients and drivers in the context of coronavirus, has Movia selected, to customers in flextrafikken can't use the chair. This means that from Monday 16. march will not be possible to offer the seat beside the driver (forsædeplads). This also applies to customers who have a special grant from the municipality or the region. The driver has been asked to reject customers who do not want to comply with driver's instructions.