63-year-old prison: Had the machine gun in his safe-deposit box

A skarpladt Smith & Wesson-revolver lay skudklar by the bed in the bedroom, and in a safe-deposit box at Handelsbanken in Farum there was hidden a submachine gu 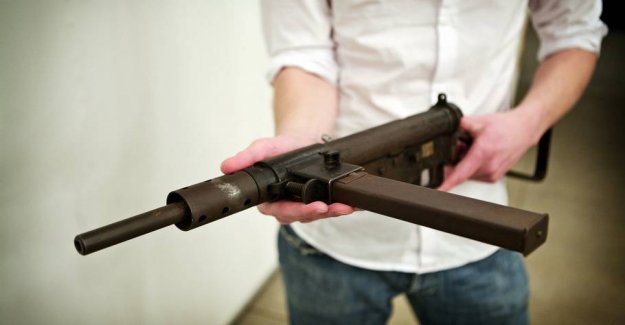 A skarpladt Smith & Wesson-revolver lay skudklar by the bed in the bedroom, and in a safe-deposit box at Handelsbanken in Farum there was hidden a submachine gun, a sten submachine gun that was disassembled.

that was the gist of some of the charges in the Court in Lyngby against a 63-year-old man from Perth, who yesterday was remanded in custody to 30. march, charged with possession of illegal weapons and marijuana and skunk.

The 63-year-old declined to comment in court, but kærede not remand to the district court.

He has no known connections to gangs or gang members, and he is in, moreover, with impunity.

It was the police's Special Investigation into the East, this Sunday at the 18-time beat to against the 63-year-old, who lives in a villa.

According to the vicepolitiinspektør Torben Henriksen, SEØ, it happened after a ’tip’, but the police will not elaborate it further.

In the house, police found six firearms, namely four pistols and revolvers, and two rifles. Then got the police opened the man's vault, which contained the detached sten submachine gun, as assessed to be fully functional.

– Now all weapons are examined to see whether they have been applied to one or another, says Torben Henriksen.

Police found barely eight kilos of hashish and two kilos of skunk in the context of the search. There was also found ammunition for all weapons, but the police have not yet counted all the cartridges up.

the Revolver that lay by the 63-year-olds to bed, was loaded with five live rounds in the drum that holds six shots. Among the weapons was also a Browning pistol and a Luger pistol. Riflerne was a caliber 22 and a sharp luftgevær in caliber eight.