Mosul: Twenty-six thousand people have fled in the 10 days since Iraqi forces launched a push to retake west Mosul, where militants were putting up “fierce” resistance on Wednesday.West Mosul is Daesh’s last urban bastion in Iraq, and its... 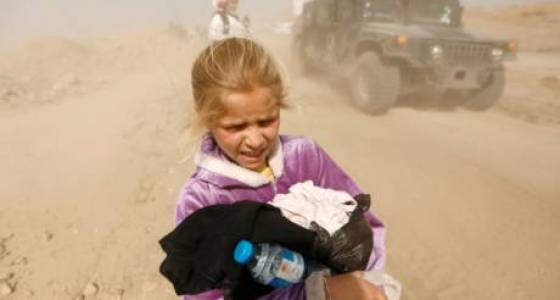 Mosul: Twenty-six thousand people have fled in the 10 days since Iraqi forces launched a push to retake west Mosul, where militants were putting up “fierce” resistance on Wednesday.

West Mosul is Daesh’s last urban bastion in Iraq, and its recapture would mark the effective end of the cross-border “caliphate” its leader Abu Bakr Al Baghdadi announced from a mosque in the city more than two years ago.

Iraqi forces have yet to advance deep into the west, but the fighting combined with privation and harsh Daesh rule has already pushed a growing number of civilians to flee.

Field teams received “26,000 displaced people from (west) Mosul during the past 10 days,” Jassem Mohammad Al Jaff, the minister of displacement and migration, said in a statement.

The number who have fled is only a small fraction of the 750,000 people who are believed to have stayed on in west Mosul under Daesh rule but is expected to rise sharply in the coming days and weeks.

Sniper fire is a significant danger in the area, said Kathy Bequary, the executive director of NYC Medics, a group providing emergency care from a mobile clinic.

“Most of our patients are combatants, but civilians are affected too. Two days ago, we treated a family - a mother, father, son and daughter - who were trying to escape Mosul and were targeted by snipers,” she said.

“The five-year-old daughter was shot in the pelvis, a through and through wound. The girl was very, very critical.”

The drive to retake the west of Mosul - the smaller but more densely populated side of a city split by the Tigris River - began on February 19, after Iraqi troops retook its east side the previous month.

Daesh is putting up tough resistance in the southwest of the city, a commander in the elite Counter-Terrorism Service told AFP on Wednesday.

The CTS is fighting “for the (Maamun) Flats area, which Daesh considered very important for control of the Baghdad road and the surrounding neighbourhoods,” Staff Lieutenant General Abdul Ghani Al Assadi said.

“The resistance is violent and fierce because they’re defending this line and this line, in our opinion, is the main line for them,” Al Assadi said.

The damage in the Maamun area is heavy, with homes destroyed, roads cratered and rows of crum-pled cars, some of them piled one on top of another.

Daesh overran large areas north and west of Baghdad in 2014, announcing a “caliphate” incorporating swathes of Iraq and Syria.

While security forces initially performed dismally, they have since retaken most of the territory they lost, with backing from US-led air strikes and other support.

Daesh has also lost significant ground in Syria, and while it still holds the city of Raqqa in that country and some territory in western Iraq in addition to in Mosul, the militants’ “state” Daesh crumbling.

The operation to retake Mosul was launched on October 17, involving an array of sometimes-rival security forces and paramilitary groups.

But the brunt of the fighting has fallen to the CTS and the interior ministry’s elite Rapid Response Division.