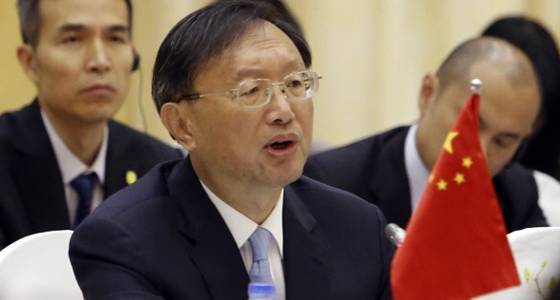 The Foreign Ministry said State Councilor Yang Jiechi is scheduled to "exchange views on bilateral ties and issues of mutual concern" in meetings with high-ranking U.S. officials during his visit on Monday and Tuesday.

Yang is Chinese President Xi Jinping's top foreign policy adviser and a familiar face in Washington. He has served as foreign minister and ambassador to the U.S., presenting a degree of continuity in a relationship now seen as somewhat in flux.

His visit comes as the future direction of relations between the world's two largest economies has grown more uncertain following Trump's accusation that China was cheating at trade and threats to raise import tariffs.

Trump has also criticized China's activities in the South China Sea, where it has built man-made islands with military features. He has suggested he might use Beijing's rival Taiwan as leverage in negotiations and accused China of exerting too little pressure on communist neighbor North Korea to rein in its nuclear and missile programs.

China has responded in relatively mild terms and last week Premier Li Keqiang expressed hope that disputes with Trump's government could be settled amicably, saying that a trade war would "benefit nobody."

Trump has also appeared to moderate his approach, saying in a call with Xi earlier this month that his administration affirms Washington's long-standing policy of not maintaining official ties with Taiwan and acknowledging China's stance that the self-governing island is part of Chinese territory.