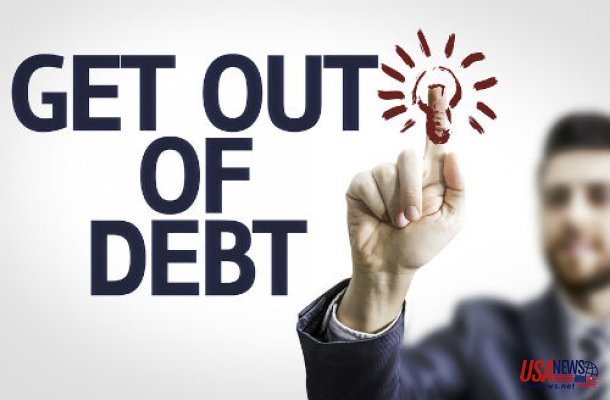 In 2018, the American household debt was at $13.21 trillion. For those under thirty-five years, most of their debt lies in credit card debts and student. Student loan debt currently stands at $1.56 trillion. Those in the age bracket of thirty-six to forty-four have most of their debt lying in mortgages.

Living in debt reduces the quality of life and takes its toll on an individual’s physical and emotional health as well. It can lead to depression, living in fear, and shame which eventually leads to stress-related illnesses such as cardiovascular diseases.

Becoming debt-free calls for creativity and stepping out of the norm. Here are a few strategies to get you started.

With an average annual salary of $31,000, Zina Kumok paid off $28,000 worth of student loans in three years. She cleared her student debt by using every extra coin earned and saved to clear the debt.

Adopt the same attitude, for instance, hold off eating out for some time, wash clothes in a bucket to save on laundry services, replace clothes only when they are worn out, and shop at Good will stores. Before spending any dollar, ask yourself “is it absolutely necessary?” if it is, then what is the cheapest option available. Every dollar counts.

2) Get an Evening Job

With a single source of income, you may have to spend most of your life splitting the paycheque between various lenders. Under such circumstances planning for your future can be difficult.

Take a part-time job. It may be stressful working more than ten hours a day and your social life may suffer, but the sacrifice will be well worth it. Try surviving on the side income and use all your regular income to pay off debt.

If you think the income from a side gig can’t make a difference, Adrienne Dorison’s story is enough inspiration. She was able to pay off a $48,000 student debt in six months with the help of a side hustle.

3) Move In With Your Parents or Friends

To clear your debt, you need to cut your expenses as much as possible. Eliminate your rent expense by moving in with your parents. This is a toughie for most people but a strategy that has worked for numerous others. Live in the basement if you have to. It’s not going to be forever, just a short while until you are free from debt.

If you are a married couple, moving back to your parent’s house may be improper. Try living with another couple who are on a quest to save some money as well. Buy food in bulk which is cheaper, and split utility bills. As long as you can respect each other’s privacy, you can live in perfect harmony. All that you save, use it to pay your debts.

Jason Roesslein, an engineer at Tesla Motors lived in a 2006 Dodge Sprinter van for five months. By the end of the period, he was able to clear off his student loan debt and save a decent amount. He ate at the company’s café and showered in the gym. His only expenses were the phone service charge and car insurance.

To dig yourself out of debt, get crazy and embrace inconvenience. Sell your household items and leave only the absolute necessities – use the proceeds to pay off some debt. Move out of your cozy home and into your car. Remember that we are trying to get you out of debt, buying a bigger van takes you steps back in your financial recovery, use what you have.

Negotiate your interest rates and use the snowballing method to pay off your numerous credit card loans. A snowballing approach to debt repayment is where you list all your debts, pay the minimum amount for each, then use any leftover money to knock off some more debt from the smallest loan taken from online lender or services similar www.realisticloans.com .

6) Learn to Do Things Yourself

To cut on your expenses, look at the different services you receive that you could do on your own. For instance try dying your hair, doing minor repairs in your house, making your own soap, and creating your own furniture. Information on DIYs is easily available online and can help you save some money.

Joel Weber took DIY to an entirely new level by constructing a tiny house to live in as he tried to go through school without accumulating debt. He was able to save on the cost of taking the school’s residence hall which could have cost him approximately $1,135 per month. The house was constructed in a year and cost him $15,000.

7) Hunt the Internet for Money

Forget following gossip on social media. Use your time instead to get paid for taking surveys, watching videos, and surfing the web on sites such as Swagbucks, Money App, Slidejoy, and InboxDollars. You can use your smartphone or tablet. Its flexibility enables you to make money as you commute to work, during lunch breaks, or when queuing at the bank or Starbucks.

Use sites such as TaskRabbit and Gigwalker to run errands for others at a fee. Data analysis by priceonomics revealed that people make up to $380 a month on TaskRabbit. Sacrifice any free time including the holidays to make some bucks on these sites. You will have the chance to enjoy holidays later when you are debt-free.

Get money from all the junk you have bought over the years by doing a garage sale and selling it online on sites such as eBay and Craiglist. Things that have been lying useless in your house could turn out to be something someone else has been looking for.

You can also become a flipper and make money out of other people’s yard sales. Buy stuff people don’t need, fix it up and sell it online on eBay or other local listings. Rob and Melissa have been able to make $100,000 a year flipping items for profit. Be quick to note yard sale signs you have been ignoring in your neighborhood, it could be the ticket to a life free from debt.

Paying your debt requires thinking outside the box, casting your pride aside and getting your hands dirty. If you don’t, your debt could multiply, and leave you depressed. Overdue debts such as title loans could have your vehicle repossessed, and that would worsen your already poor credit score.

The scrap metal business is a field most people shy away from, but through hard work and a little knowledge on the secrets of the hustle, you could make a decent amount. Rebecca and her husband John ventured into the business and it helped them pay $25,000 worth of debt in a year. Surprised? You should give it a try

You probably cannot fathom the idea of living without a car despite the fact that you are drowning in debt. But let’s talk numbers, maintaining a car is very expensive. In a period of three years and an average of twenty thousand kilometers per year, a Toyota Aygo 1.0 VVT-I would cost approximately $11,703 to run. How much debt could you cover with the same amount?

By selling your car, you can use the proceeds to cover some of your debts and it also reduces your monthly expenses. Buy a bike instead, carpool to work, or use public transport. Use the savings to reduce your debt.

No, it’s not about starving yourself, starve and stack is a strategy used by couples to pay off debts, save, and invest. With this method, the couple relies entirely on one income to cover their costs and expenses while using the other income to pay off debts.

Penny Hoarder Jen Smith and her husband were able to pay off $78,000 worth of debt in two years using the method. You can move into a smaller house that fits your new reduced budget, find cheap ways to have fun and get creative with date nights.

Go crazy on your debt and decide to do all it takes to clear it. Taking more credit to offset due loans gets you nowhere, it costs you more in the form of fees. Tackle your debt head-on and use smart strategies to get results.

Your strategies should revolve around two main principles, cutting expenses and increasing income. In a few years, through discipline and dedication, your debt will be a thing of the past.