The president of Ukraine, Volodímir Zelesnkyki, demanded a punishment for Russia for its war crimes in his video intervention in the General Assembly of the United Nations (UN). 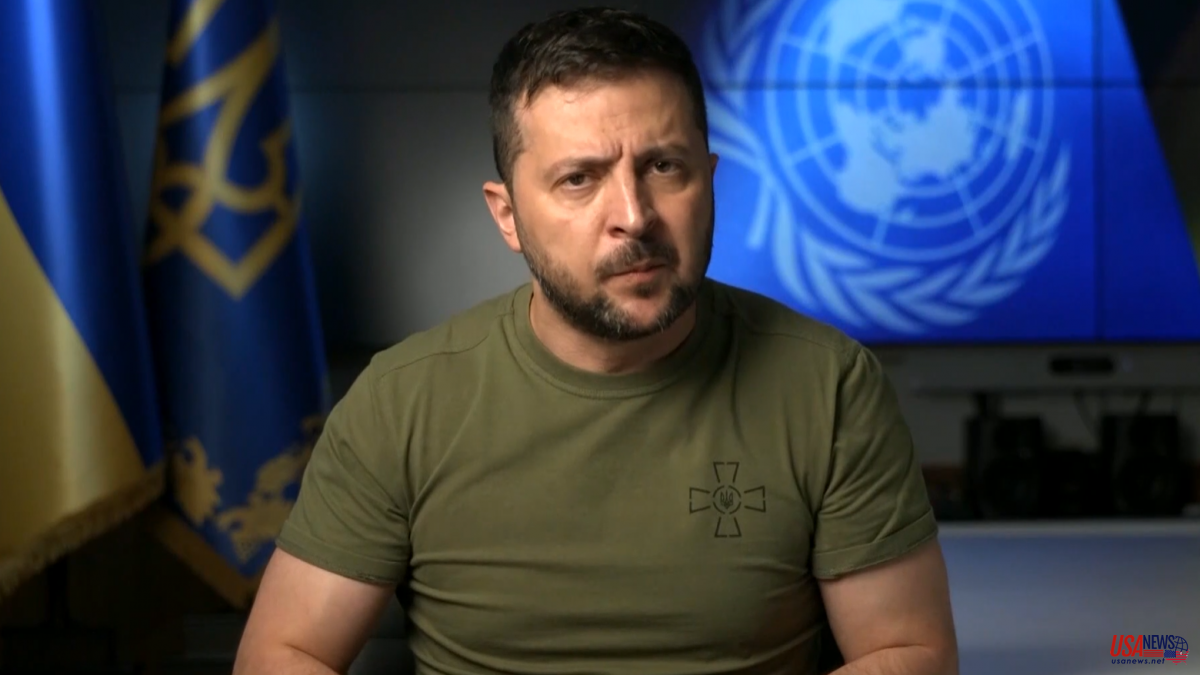 The president of Ukraine, Volodímir Zelesnkyki, demanded a punishment for Russia for its war crimes in his video intervention in the General Assembly of the United Nations (UN).

To illustrate this urgency, and as part of his peace plan, which should include the withdrawal of the right to veto in the UN Security Council, Zelensky explained that they are currently exhuming corpses in the graves discovered once who have regained ground in their counteroffensive. "The bodies of men and women, children and adults, civilians and soldiers were found in 445 graves," he explained, dressed in olive green, in a military-style plan as usual.

“There is a family that died under the rubble after a Russian bombardment (a father, a mother, six- and eight-year-old girls, a grandfather). There is a man who was hanged. A woman with broken ribs and wounds on her body. There is a man castrated before he died and it is not the first case we have seen, ”she assured.

“Please ask the representatives of Russia why the Russian military is so obsessed with castration. Did they do it to them so they want to do this to others?” he questioned.

The protection of life is one of the five parts of the peace plan that he broke down in a singular intervention, since the Assembly has returned to normal presence, but an exception has been made, it could be said that it was historic, with the Ukrainian leader and has allowed him to intervene remotely. It had the support of 101 countries, but Russia and six others (Belarus, Cuba, North Korea, Eritrea, Nicaragua, and Syria) "pressed the red button, afraid of this video," he stressed. Despite the distance, his speech received much applause, the most applauded to date.

Avoiding at all times quoting his Russian counterpart Vladimir Putin, he insisted that “a single entity among all the members of the United Nations would now say, if it could interrupt this speech, that it is happy with the war. And promised that Ukraine "will not allow that entity to prevail over us, even if it is the largest state in the world."

In his defiant speech, Zelenski detailed his formula for peace and demanded that nations provide more military aid, with long-range defensive and attack weapons. "We are achieving results in this struggle and we see what will be the end of this war and what will guarantee a stable peace," he insisted.

The first element of the peace plan is corrective. “Punishment for aggression. Punishment for violation of borders and territorial integrity. Punishment that must be maintained until the restoration of the borders is internationally recognized. Until the aggression ends and until the damages and losses from the war are fully compensated,” he stated,

This is where I include that an aggressor cannot have decision-making capacity in international organizations. "The right of veto and their rights must be removed," she reiterated.

In addition to punishment, Zelensky demanded the protection of life, the restoration of security and territorial integrity, where he pointed out that Russia's attempts to target nuclear facilities (its only nuclear allusion, avoiding talking about atomic bombs ) “will impact all of you, because none of you will find a vaccine against radiation sickness.”

Another point was that of security and its guarantees and finally he alluded to Ukraine's determination to defend itself against Russian aggression.

As concrete measures, he requested the creation of a special court of justice to prosecute the crimes of aggression, charge the perpetrators and claim the Russian money. “Russia must pay for these wars with its assets. This is one of the most terrible punishments for the Russian leadership, because they value money above all else”, he demanded.

Among other measures, he called for "citizens of the aggressor state not to enjoy tourism or shopping in territories where peace is valued, but should be encouraged through visa restrictions to fight against aggression from their own state." ”, with which he suggested sowing the seeds of internal revolt. “Punishment for inciting evil,” he stated.

From the inside out, Zelensky stressed that countries should not be intimidated by Rusco's “blackmail” with oil and gas supplies, asking for limits on Russian energy prices, as well as mitigating price increases. "Limiting prices is safeguarding the world, but the world must do this or it must be scared," he launched into the air.

He scoffed at what he considered a false narrative from his rival, which speaks of peace talks and proposes "pseudo" referendums to justify territorial annexation. In contrast, Ukraine is not yet ready for talks, but for "a true, honest and just peace." And he finished: "That's why the world is by our side."