The war in Ukraine took a new and spectacular turn yesterday with the proclamation by Vladimir Putin of four occupied regions in the neighboring country as part of Russia and the immediate response of Volodímir Zelenski: seek protection under the umbrella of the Atlantic Alliance. 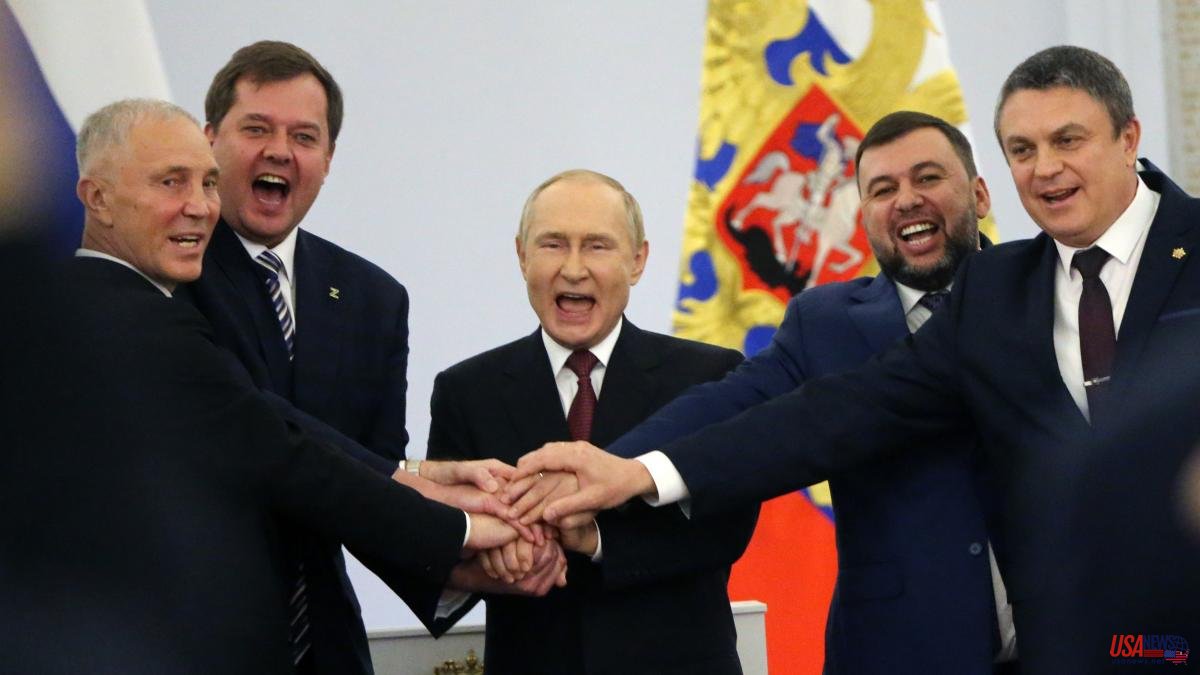 The war in Ukraine took a new and spectacular turn yesterday with the proclamation by Vladimir Putin of four occupied regions in the neighboring country as part of Russia and the immediate response of Volodímir Zelenski: seek protection under the umbrella of the Atlantic Alliance.

"We have taken a decisive step with the signing of the application for admission to NATO by accelerated procedure", announced the Ukrainian leader a few hours after the solemn ceremony held in Moscow in which Putin declared the inhabitants of Donetsk "fellow citizens". , Luhansk, Kherson and Zaporizhia. Zelenski evoked the recent express negotiations with Finland and Sweden to defend that it is possible to accelerate the accession process and argued that, de facto, his country has already demonstrated its "interoperability" with NATO military standards.

“The fate of democracy, in its confrontation with tyranny, is being decided in Ukraine. It is here, with the firmness of our national borders, that the firmness of the borders of all European countries can be guaranteed," argued the Ukrainian president in a statement in which he announced that he is willing to negotiate with Russia but not with Putin as President. Although NATO agrees in its diagnosis on the relevance of the war in Ukraine for the entire continent, its response was similar to the one it has given in recent times to its approaches to the organization.

"We have always said that NATO's door is open" to all European democracies that want to apply for membership and "we have shown it," replied its secretary general, Jens Stoltenberg, from Brussels, who recalled that at the Madrid summit the allies they said "clearly" that they supported Kyiv's right to choose the security arrangements in which it wants to participate, a power that Moscow denies it. Now, however, “our focus is on providing immediate support to Ukraine so that it can defend itself against this brutal aggression. That is our main goal."

Like the European Union, NATO condemned in a harsh statement President Putin's proclamation of four occupied territories in Ukraine as part of Russia. “It is the biggest attempt to annex a European territory since the Second World War. Another 15 percent of Ukraine's territory, an area the size of Portugal, illegally taken at gunpoint. A desperate maneuver that shows not strength but weakness.”

"The allied countries do not recognize and will not recognize" the result of the "mock referendums" held in the occupied regions, Stoltenberg stressed before calling on the rest of the international community to do the same. “These territories are Ukraine. Donetsk is Ukraine, Luhansk is Ukraine, Kherson is Ukraine, Zaporizhia is Ukraine, just like Crimea is Ukraine,” he emphasized.

The other key message from the Allied Secretary General is that none of Russia's latest decisions changes "at all" the nature of the conflict or NATO's determination to help Kyiv "as long as it takes" to exercise its right to defend its sovereignty and territorial integrity, by sending weapons and military aid, even though Putin threatens to consider a declaration of war and suggests that he might resort to nuclear weapons if the Ukrainian army tries to retake part of the “annexed” regions.

“This annexation attempt does not change the nature of the conflict. If we accept that Russian annexation and nuclear saber rattling undermine our will to support Ukraine, we would be accepting nuclear blackmail. We would accept that by threatening to use nuclear weapons, Putin can get what he wants. Russia must understand that it must not go to a nuclear war, it has been clearly communicated to it that if it does so it will have severe consequences for Russia.” In short, for NATO, Ukraine “can continue its efforts to liberate more territories”, including those annexed.

Stoltenberg's tone was serious, at the height of the turn that the war has taken in recent days. “The combination of the mobilization of reservists, with the irresponsible nuclear rhetoric of the last few days and now the annexation means that we are facing the most serious escalation since the beginning of the invasion. "Putin's goal with all this is for us to stop supporting Ukraine, but he is not going to achieve it," said the Allied Secretary General, who addressed European public opinion to defend that the fate of Ukraine will determine that of the continent.

“If we let Putin win, it will be a catastrophe for Ukraine, because it will cease to exist as a sovereign country, but also for us. Doing nothing is a big risk because it will create a world where Putin will see that he can use force with impunity” and that will lead to “a more dangerous world for everyone”.