Zahi Hawass, the pharaoh of Egyptology, tireless discoverer of treasures, promoter of the immense Great Egyptian Museum, which should finally open next year, and discussed Minister of Antiquities in the last months of Hosni Mubarak, fallen by the Arab Spring, stars today a conference in Madrid at the Casa de las Alhajas within the framework of the exhibition Daughters of the Nile: Women and society in Ancient Egypt. 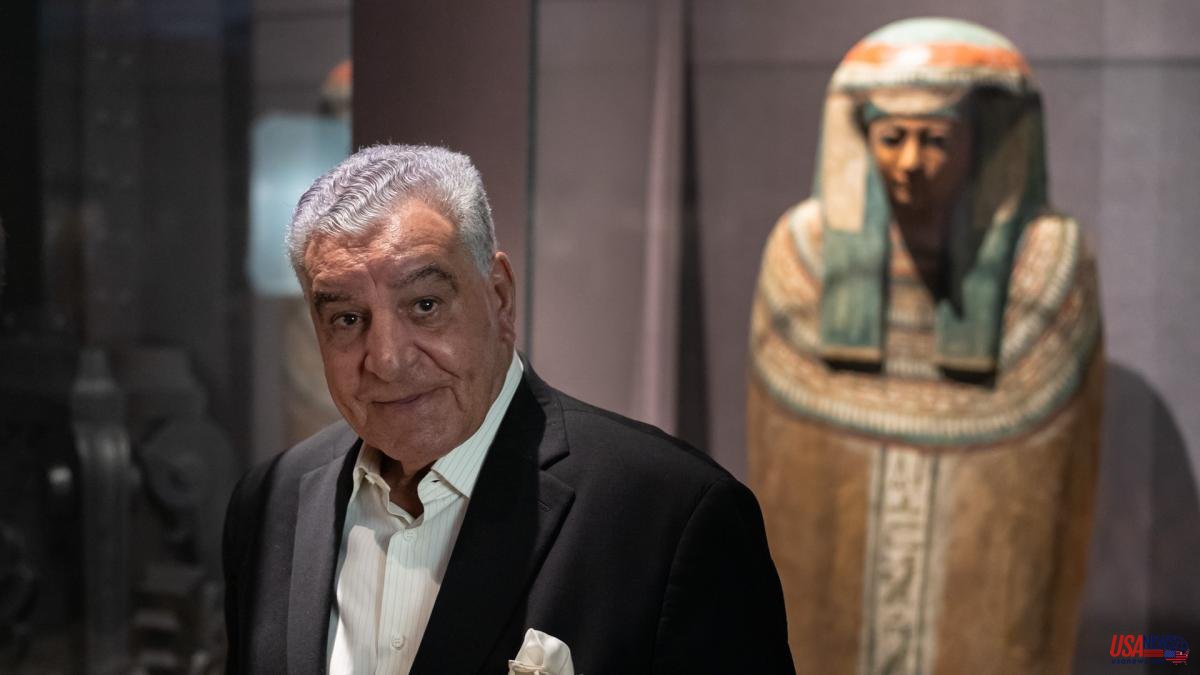 Zahi Hawass, the pharaoh of Egyptology, tireless discoverer of treasures, promoter of the immense Great Egyptian Museum, which should finally open next year, and discussed Minister of Antiquities in the last months of Hosni Mubarak, fallen by the Arab Spring, stars today a conference in Madrid at the Casa de las Alhajas within the framework of the exhibition Daughters of the Nile: Women and society in Ancient Egypt. The Egyptologist born in Damietta in 1947 and author of numerous books and documentaries for National Geographic or Netflix answers without hesitation all questions about his work and about his country, where he believes that General Al Sisi is doing "a good job for Egypt" .

Were women as independent in Ancient Egypt as the exhibit claims?

Completely independent. They had more rights than women in Europe in the 16th century. They could get divorced, marry for love, they wore sophisticated dresses, good makeup, they had different jobs, they worked in the pyramids, they made artifacts, kitchenware, they made bread for the workers of the pyramids, salted fish, they sewed... First they took care of the house and if they had time they could be judges or do something else.

Why could they do all that that cost others so much?

The Egyptians thought that the Nile River was made by the tears of Isis. And the goddess Hathor was the wife, the eye of the sun god Ra, and so she was also the wife of the pharaoh and the mother of the next king, without women there is no Egypt. Without Isis there is no Egypt. For the Egyptians, women are very important in their society even if they cannot be pharaohs, they have to be men, but there cannot be one without women.

Are Egyptian women in Egypt today as free as they were then?

Women in modern Egypt are like women in Madrid, exactly the same.

How is the current Egypt of General Al Sisi?

Al Sisi, in my opinion, is doing a good job for Egypt. He is not looking to be loved by his people, but he is doing things to make Egypt stronger. Building highways everywhere, bringing electricity and water to towns that don't have them, that live in darkness. You now have healthcare for all, insurance, education, many universities, great things in education. I have visited the new city of art and culture in the new capital three times. Incredible. A great museum, a wonderful opera house, and it is preserving the culture of Egypt. The Grand Egyptian Museum is costing millions of dollars. Egypt needs that money and he is building it. I don't want to be a minister, I'm beyond all that now, but I say it because that's what I see from this man.

It was a mistake. When he was the head of Antiquities he was more important by nine years than when he was a minister. I'm not a politician, I'm an archaeologist. And when I was the head of Antiquities I changed the archeology in Egypt. Ask any Spanish archaeologist how everything changed. When I left the job of minister I became more important than when I had it. I'm still digging, making discoveries, giving lessons all over the world, writing books, training young people... I don't have three free minutes in my life.

They want him all over the world, he says. Why do we still have this enormous fascination with Egypt?

If you ask a child in Spain about Egypt, they will think of pyramids, sphinxes, Tutankhamun, mummies, there is no culture that has this magic. Egypt has magic. Look at the Spaniards going to the Valley of the Kings. They are hungry looking at the temples, the tools, and they are happy that Egypt is safe for tourists.

This year marks the centenary of the discovery of Tutankhamun's tomb by Howard Carter. You will organize a great congress.

On the 4th of November we will open the house of Howard Carter, and in front of the tomb there will be an important celebration, dinner for 500 people in the Luxor temple and we will have an international congress in which I will give the main lecture because I am the only Egyptologist who has completed the work of Howard Carter, using DNA to find Tutankhamun's family, and scanning to find out how he died. We are working with DNA to find out if it was due to infection or not. If he had, he died in an accident. And I've been digging in the Valley of the Kings for the last seven years looking for the tomb of Queen Nefertiti, for her mummy through DNA.

What has led you to write the libretto for an opera about Tuntankhamun that will premiere in November?

We don't know the exact date of the premiere yet, but I thought I'd write it for the anniversary that is celebrated this year and also because the opera Aída has become old. It has been seen by millions of people. It's enough. I have written a drama, the composer and the singers are Italian, except for an Egyptian.

Is it the year of Egypt, considering that the Grand Egyptian Museum is finally opening?

No, it is the year of Egypt because we are celebrating 200 years since the discovery of the ancient Egyptian language and in October I am going to write a petition that I hope will be signed by people from Egypt and from all over the world for the return of stone to our country. Rosetta. And then the return of the bust of Nefertiti. And then we will have the celebration of Tutankhamun. The Grand Egyptian Museum cannot be opened this year for two reasons. The first is that the area between the pyramids and the Great Museum has to be cleaned up, there are still many ugly houses and the like. And secondly, Egypt hosts the climate change conference in Sharm el Sheikh, many heads of state and kings attend, it needs a lot of security. That is why the Great Museum will be opened next year.