Yunior García: “The Cuban regime is a mafia”

Almost a year ago the playwright Yunior García (Holguín, 1982) managed to precipitately exile himself in Spain, after founding the opposition group Archipiélago and becoming the symbol of last year's protests against the Cuban regime. 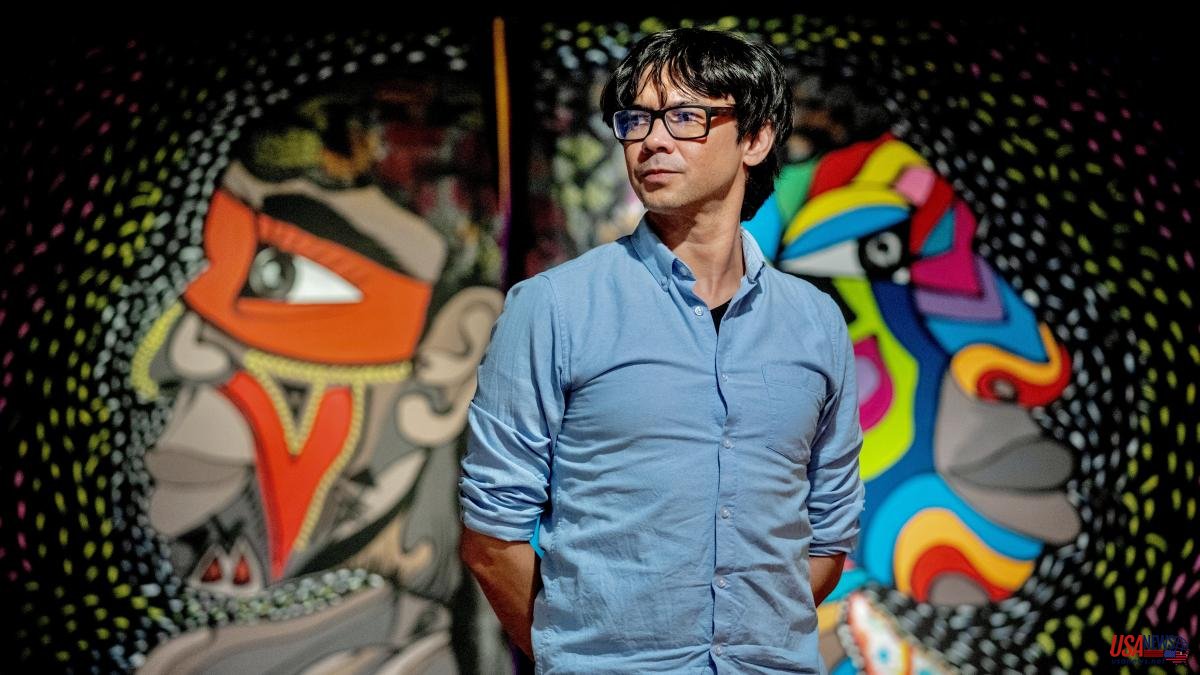 Almost a year ago the playwright Yunior García (Holguín, 1982) managed to precipitately exile himself in Spain, after founding the opposition group Archipiélago and becoming the symbol of last year's protests against the Cuban regime. García, who has just premiered his first play in Madrid, explains that the first interrogation he was subjected to by the security forces in Havana was a seafood platter with lobsters in a house full of cameras that recorded everything. The other interrogations were not so kind. The artist participated a few days ago in Barcelona in a colloquium at Casa Amèrica Catalunya.

After six decades of revolution and internal opposition movements that barely tickled Castroism, it has had to be a movement of artists and intellectuals that has achieved greater international impact than on previous occasions.

I think that the clash of the dictatorship with artists and intellectuals has been from the first minute. First, the case of the poet Heberto Padilla. Then came the gray five-year period, where many artists and intellectuals, writers, ended up in concentration camps known as military production aid units, the UMAPs. There was also the parameterization when, if you did not meet certain parameters of what they understood to be the revolutionary male, you could not be a teacher in a school or be an artist, teacher, etc. In other words, there was always a clash between artists, intellectuals, and what we call revolution. What has come to change the whole game has been the use of social networks. Once Internet access and Internet access on the telephone are allowed in Cuba, Cubans found a means to associate, meet, express themselves, which they did not have before. And of course, there artists have certain advantages due to the power to communicate. That is why I understand it is logical that when Cubans have access to social networks, something like the San Isidro Movement appears, which are young people who were marginalized by the regime. The rejection of the first decree that Miguel Díaz-Canel issued after being appointed president, which was Decree 349. It was the first big mistake that Díaz-Canel made. It provoked a massive rejection in the population. They tried to divide artists and intellectuals into two groups: the privileged, who were those who came from the academy, those who had had access to study at a school; and those who did not have those privileges. So, something like the San Isidro Movement was sold by the regime as a movement of marginalized people, of criminals, of pseudo-culture, and it was not like that. What they did not calculate is that this would motivate a solidarity of the artists who did come from the academic world.

In the protests last year, innovative slogans were shouted, with an intellectualized charge, such as “Let them go” or “Homeland and life”, the title of a song that has already become a symbol against the Cuban dictatorship. Does it also have to do with the fact that there are intellectuals or people from culture behind the protests?

Has to do. There are two processes that go hand in hand. One is the intellectual deterioration of the regime's leadership. It is a cadre system that does not privilege ability but loyalty. That makes the fittest fall by the wayside and the most obedient survive. The current nomenclature of the regime is the worst in history. It is a nomenclature devoid of ideas, with terrible communication skills, with the worst hashtag. However, exile has been nourished by the best of Cuba, the best artists are leaving, the most qualified people, and this has also meant that the discourse of exile and the opposition has matured over time, that it has been becoming more and more powerful, that there is more brain within the opposition. And what is happening inside is a totally reverse process.

His departure and that of his wife from Cuba with the help of the Spanish government was heavily criticized by other opponents. On the island he left behind a ten-year-old son from a previous partner. Why did he decide to leave instead of continuing the internal resistance?

I never considered myself a political leader. Nor was I aware of the repercussion that what we were doing was having on a global level. I had no internet. I had no access to anything. They made me feel alone, abandoned, failed. I couldn't communicate with practically anyone. And I was also more concerned with being useful than becoming a symbol. In the history of Cuba, the issue of symbols has been overvalued and the issue of utility has not been valued in its fair measure. I asked myself: how can I be more helpful? I have always considered myself an organizer, someone who uses the word as a weapon and so I thought that going out was the best way to be able to denounce what was happening and to be able to organize something that would have a real effect as change in Cuba. Maybe I was wrong. Every day in the shower I question what was the right thing to do at that moment.

What is your position regarding US sanctions against Cuba?

I always questioned how much the US embargo served the official discourse of the regime. How much was used as the perfect justification. The Cuban regime needs tons of excuses and in that sense the United States is its main trading partner because with the embargo it gives it all the excuses it needs. I also saw an interview with Che Guevara in 1964, where Che is a staunch defender of the embargo because it serves to raise the fighting spirit of the people. That is why I have been critical of the embargo, but also seeing Mandela's speech at the UN demanding sanctions against the Pretoria regime makes me question whether the sanctions are morally valid or not. I believe that sanctions should be applied to a regime that is dictatorial, that massacres its people, that violates the human rights of the citizens of its country, but these sanctions should be applied in the most intelligent way possible so that they do not affect the population; that they make it dependent to the extreme of that regime in the minimum, that they give that society possibilities to be autonomous, that it can develop, that it can get rid of that dependence and, at the same time, not give so much oxygen to the dictatorship.

First, it was thought that when Fidel Castro died, the regime would be democratized. Then it was said that it would happen when Raúl Castro left the presidency and that Miguel Díaz-Canel was a reformist. But none of that happened. Is there really any chance that the regime will reform and democratize from within?

That's like expecting the mob to reform or a drug cartel to reform. The Cuban regime is a mafia, that's how it works. Even the very concept of the mafia that they have is what made it possible for them to survive the collapse of the socialist camp, because they are an autonomous mafia, in a way, and when the godfather dies he is always replaced by a new godfather. What happens is that this godfather who is now is not Michael Corleone at all.

Castroism organized a referendum a few days ago where the Family Code was approved, which legalizes homosexual marriages. It is the first time that the regime mounts a plebiscite and disseminates results that were not Bulgarian, but with a third of the population against the government's proposal. To what do you attribute it?

It is contradictory. The regime rightly submits the Family Code to a referendum because it had nothing to lose. In any case, the one who did lose was a community that has been mistreated by the regime for years, which is the LGBT community. That has divided the opposition and the regime used it precisely for that. On the other hand, they had been falling behind in their leftist discourse. While the rest of the world was passing advanced laws that benefited minority communities, Cuba was still stuck in a super stale conservatism. And so they needed something to wash their face and get back to the forefront of certain supposedly left-wing ideas, although it is questionable whether that regime is left-wing, because they have many characteristics that resemble fascism. And somehow they managed to divide Cuban society. I don't think that vote is so much a conservative or sexist vote, or homophobic, I think that in some way it was a punishment vote against the regime. However, I am glad that it has been shown that the majority did not support the regime because if you count the abstentions, plus the negative vote, plus the annulled ballots, it is more than fifty percent. The majority did not support the regime but the Code was approved, which does bring benefits, of which I am happy and celebrate for minorities that have been mistreated.

In the last twelve months, at least 180,000 Cubans have left the island and entered the US illegally through the Mexican border. Another 8,000, at least, have tried to reach Florida by sea, although only 2,500 made it because most are intercepted by the US Coast Guard. It is already the largest migratory crisis in Cuban history, since these figures exceed the exodus from Mariel in 1980 and the crisis of the rafters in 1994 when a total of 160,000 citizens left Cuba. What is happening?

It is that we are in the worst moment. Migratory waves are sometimes the size of their crises. The greater the crisis, the greater the number of citizens who escape and this is already the largest. But not only is it the largest, but the Cuban population drops, for the first time in many decades, from 11 million. Also, not all of those who stay in Cuba do so because they want to stay; most of those who stay is because they have no way to leave. Cuba is surrounded by water. If Cuba had a land border, probably only Díaz-Canel would remain on the island.

The disaster has been huge. The entire country was left in darkness. People, what little they could get of food, was spoiling in the refrigerators and that meant that people couldn't take it anymore. Many Cubans took to the streets, began to make cacerolazos, publicly repudiated Díaz-Canel when he tried to approach one of the neighborhoods and we do not know what else could have happened, but we do not rule anything out. We know that the regime is also willing to massacre.

You were a student leader and you got to know Fidel Castro. What impression did he give you?

When I was able to shake hands with Fidel it was a disappointment because I discovered that it was not the hand of a revolutionary, nor of a worker, it was the hand of a monarch. It was a white hand, very clean, that never in his life had touched a work instrument, with perfect nails. And a man who looked at you in a very indifferent way, above all, was a kind of demigod. And that's when I realized how similar the Cuban system was to a religious sect.