Yuja Wang: "The age of being sexy has passed me" 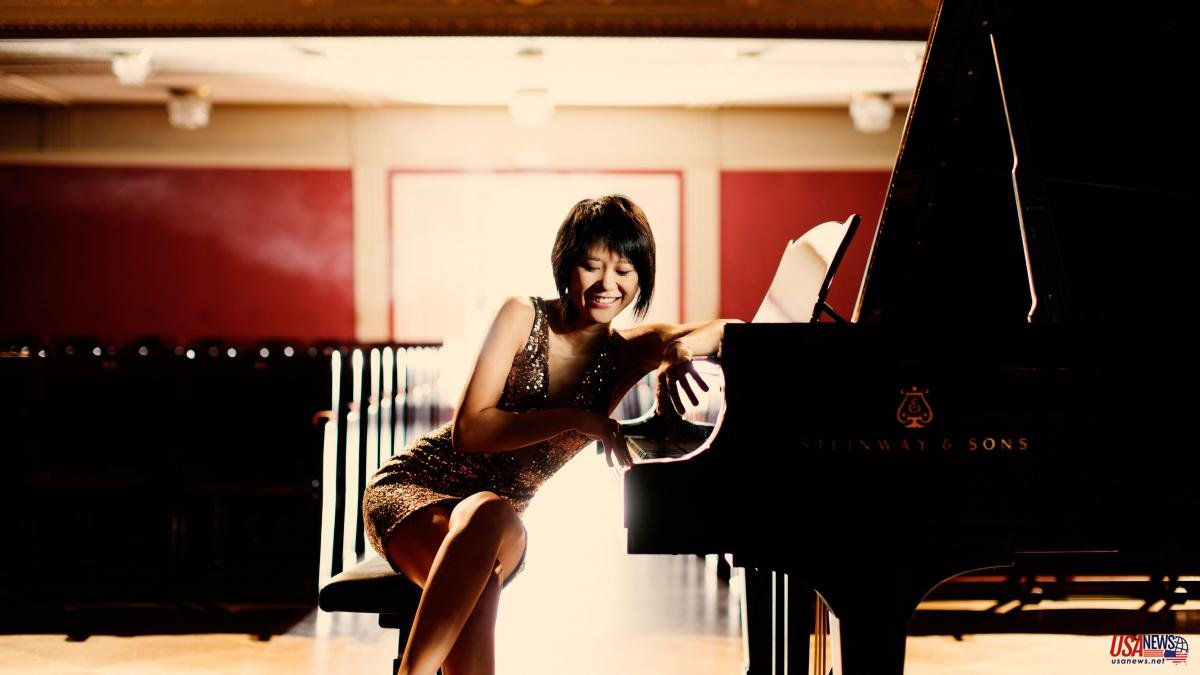 Spontaneous, accurate, passionate... and at this point more interested in sensuality than in sexy. This is how Yuja Wang (Beijing, 1987) introduces herself in conversation with La Vanguardia on the occasion of her current tour of Spain with Ibermúsica. On Monday the 12th in Madrid, Tuesday the 13th in Zaragoza and Wednesday the 14th at L'Auditori de Barcelona, ​​within the BCN Clàssics cycle -with a 15% discount for subscribers when purchasing tickets on the La Vanguardia sales website-. “I'm not in my twenties anymore, I'm not old enough to be sexy anymore,” says the virtuoso Chinese pianist, whose intelligence, artistic charisma and stage presence – her short skirt leaves the restrained world of classical music breathless – have transcended the strictly musical sphere.

The fiery piano performs alongside the London Philharmonia Orchestra and Finnish maestro Santtu-Matias Rouvali the Concerto no. 1 of Rajmáninov that he has learned after the pandemic. “It’s the only one by Rajmáninov that’s new to me, and I’m premiering with that orchestra, I’m expectant,” he says over the phone. The program completes Chaikovski: the overture of Romeo and Juliet and his 4th Symphony.

What consequences has the absence of an audience during the pandemic had on your live show?

What I feel is that the audience is much more enthusiastic, or maybe I didn't realize that it was... In any case, live is now a more intrinsic part of my life. I'm less nervous about it. In the pandemic I found myself trying to figure out who I am. Simply not doing anything but being somebody. And now I continue in that, in being myself and playing the way I am. I was looking for perfection, to comply, to challenge myself, there was an impulse. Now I go on stage with the feeling of… “well, that's how I play today and I'm glad you guys listen and share it”. It is calmer.

And how is that Yuja laid back?

Not that I want to repeat the experience, but being in New York alone in a pandemic made me feel comfortable in myself. Cooking, shopping, watching movies... without looking for company or feeling alone. In the end, you are antisocial, but I was very comfortable. I slowed down a lot, enjoyed nature, learned about how I can contribute as a human being. I would spend it on the phone with colleagues, Yo-Yo [the cellist Yo-Yo Ma], Leonidas [the violinist Leonidas Kavakos]... wiser people but who were in the same boat, going through the same thing.

Has Yo-Yo Ma encouraged her to join environmental activism?

Nerd. But with him I learned that you have to pay attention to the intention of my actions because everything I do has an impact. He didn't tell me how I should do it, but he did tell me to be aware of the targets I should pay attention to. Whether it's the environment or the issue of feminism and women's empowerment. I hate the word power, but I would say that I have an influence in the world of music that can be transferred to other people. Although I am interested in the power of music itself, not so much in those human frustrations that ultimately involve political issues.

But you must have an opinion on feminism and its evolution...

Yes? I don't know, I think it all has to do with human nature. Statistics tell us that taller and more attractive people tend to get better jobs and positions in a company, because people are more attracted to them. If you stop to think that you are a woman and you are not treated well, you tend to see everything through that narrative. In my youth I always saw it as an advantage: being small and cute had advantages over a tall and strong man, and also with a more fantastic, imaginative and poetic interpretation. So he had what he wanted. Then, being alone in New York, I wanted to discover the city and I was annoyed by the constant protests about MeToo, Black Lives Matter... The city was in chaos, yes, but it opened my eyes, because being Asian in full pandemic was not the coolest. I saw that there was a lot of hater, a lot of violence. And the Chinese, in any case, seek harmony: I have been practicing positive thinking, I have concentrated on seeing the good in life.

It's been 15 years since she burst onto the scene, replacing Martha Argherich in Boston. And since then she has played with the great masters, from Abbado to Dudamel passing through Gergiev... How do these figures influence the soloist?

It's hard to answer that because right now I'm dating a young, very young director… ha ha. Today is a very different generation. Claudio was the only one of his that was not a dictator type “do as I tell you”. It was more about encouraging the orchestra and getting the best out of them listening to each other. A magnificent influence that persists even today when he, for example, directed the Mahler Chamber or the Mozart Orchestra from the piano, heirs to the groups he created. When there is this orchestral level, the figure of the conductor is not necessary, except if you have to interpret contemporary repertoire, of course. Then I played with Gustavo Dudamel, and now there is that other Gustavo, Gimeno, who I love, each one with his backgrounds, because Gimeno was previously a percussionist at the Concertgebouw. The one I'm seeing now, he was a cellist, then there's another 22-year-old Finn who was a pianist [probably Tamo Peltotoski]…

So I always thought that the maestro could tell me what to do, but since Gustavo [Dudamel] there is Yannick [Nézet-Séguin] or Jakub Hrusa who are a little older than me but they already know that the soloist is the one who has the singing voice, and I agree with that, since he is the one who really knows the piece in a concert. And now that I am getting older and thanks to the industry I can have a conductor who is practically a child, I see that this is a good system, because these young people began to conduct while they were studying the instrument. I wish it had been like that for me. Directing is something comfortable for a child, physically it's something that comes naturally... I speak as if I were 60 years old, ha ha, but I started at 16, a long time ago.

Yes, and he has a very Finnish character, he is very intuitive. He's a hunter, he lives in the woods... I've read about him in The New Yorker and he's not your typical teacher; he goes out and hunts as a hobby.

Would you go into the woods to hunt?

No no, actually I often think about becoming a vegetarian because I feel compassion for animals, but they taste great and I love to eat.

Better hunt down Rachmaninov. In January he does No. 5 at Carnegie Hall and here is No. 1 that is rarely interpreted. Why is it not touched?

Because it is not easy to join. The very tender first movement has a huge cadenza that comes out of nowhere; the second, which I love, is fun; and the third, virtuoso, experiments rhythmically with the orchestra... He wrote it at the age of 18, and it has that incredible romantic innocence, with a great influence from Tchaikovsky and at the same time a very mature language, with great chromaticism. The rest are included in this concert, that's how mature he is. And like all of his concerts, it's very episodic: drama, gorgeous melody, crescendo, moment of craving... and then the variation on that and the buildup. It is not easy for the public to catch him at first.

I am interested in beauty also visually in a concert. Actually, I haven't been very into fashion. It is said that she is powerful, liberating... but I felt more like Vivienne Westwood, she used her to express myself, to be myself. And it has to do with how music makes me feel. So it's a constant transformation... not very ecological, really if we talk about the environment.

I'm a little old to be sexy I think. And if it was in my twenties it was as a form of empowerment. However, after the pandemic there are other messages: there is sensuality, the state of flow, the state of non-sexuality, of androgyny...