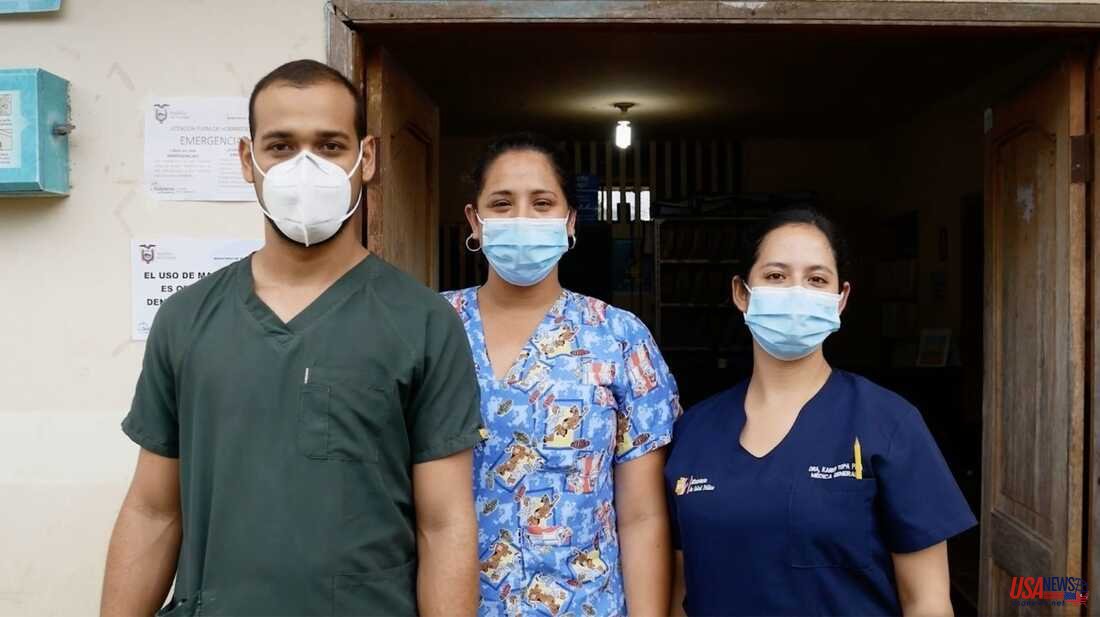 HOJA BLANCA ECUADOR aEUR" Karen Topa Pila inspects the windowless reception area at the Hoja Blanca, Ecuador small health station, with its yellow stained walls and patches of mold. "When was the electricity cut off last night?" Topa Pila is a doctor from this remote part of the country. The coworkers look worried at the small container containing ice packs and shrug. Although it is only 8:30 AM in December 2021, outside it is already 70 degrees.

Topa Pila closes a cooler containing 52 COVID-19 nasal swabs. She says, "Those tests must be refrigerated because we only have one refrigerator that is used exclusively for vaccines." She says that her team doesn't have a place to store the tests. To avoid them spoiling in the heat of the jungle, the clinic will use all the tests on the same day. A health-care worker will take the tests to the laboratory at the district hospital the next morning.

Topa Pila (25), and her team arrived at Hoja Blanca in September 2021. This 600-person village is located in the heart Ecuador's Esmeraldas Province. All of them are health-care professionals who have just graduated. They must serve one year in rural communities in order to obtain their professional licenses or to continue on to postgraduate studies in medicine. The aA+o rural was established by the Ministry of Public Health in 1970. It is also common throughout Latin America. Topa Pila's team has been deployed to Hoja Blanca for the third time since the outbreak of the pandemic. Six other communities are also managed by the Hoja Blanca station, which is responsible for mestizos as well as Indigenous Chachis, Afro-Ecuadorians, and aEUR" around 3,000 people. The communities can be so far away that health care workers must travel through thick rainforest to reach them.

The pandemic has caused huge losses in Ecuador. Guayaquil, the largest city in the country, was littered with corpses during the initial months. The virus's death rate reached 8.5% in June 2020, making it one of the most severe cases anywhere. The country had 35,649 COVID deaths as of June 5, 2022. However, it is possible that the true number is much higher.

Many experts in public health agree that COVID-19 also highlighted deep-rooted problems in Ecuador's rural healthcare system. The smallest Andean nation, Ecuador, had a population of more than 18 millions. 36% of its inhabitants live in rural areas. The country's public healthcare system, like private providers, is dispersed, with various social security programs and a Ministry of Public Health. On average, there are 23 doctors and 15 nurses for every 10,000 people. Only a fraction of the country's health professionals aEUR", roughly 9,800, according to John FarfA!n of National Association of Rural Doctors aEUR", serve Ecuadorian rural residents.

While Ecuador is financially sound, Ecuadorians are not able to access adequate medical care. The country also has the highest out-of pocket health expenditures in South America. Access to hospitals and clinics such as Hoja Blanca's is limited in rural areas. The infrastructure is poor and it takes a long time to reach facilities. Prior to the pandemic, Ecuador was facing budget cuts in order to combat an economic crisis. Public investment in health care declined from $306 million to $110 million in 2017, to compensate. In 2019, approximately 3,680 employees from the Ministry of Public Health lost their jobs. Long-standing inconsistencies have also plagued Ecuador's health leadership. In the past 43 years, Ecuador has had 37 health ministers aEUR", six of them since the outbreak of the pandemic.

Topa Pila had never been to Hoja Blanca before Topa Pila was selected by the Ministry of Public Health. It took her over 8 hours to reach Hoja Blanca. According to her, when she arrived at the small health-care station, she thought that it was going to fall.

Ecuador faced shortages of everything during the pandemic. This included face masks and personal protective equipment as well as medications and health-care workers. The government had already relocated many doctors and nurses from rural areas into urban hospitals and health centres by April 2020, leaving many people without access to medical care.

Gabriela Johanna GarcAa Chasipanta says that at one time, her team did not have basic painkillers such as acetaminophen and ibuprofen. She describes it as an "infuriating" situation. "I had to pay for medication from my own pocket in order to give it to patients who needed it most and couldn't afford it." During the worst months of the pandemic some rural outposts had no choice but to resort to desperate DIY solutions. Esteban Ortiz -Prado is a global health expert at University of Las AmA(c). He jury-rigging an oxygen tanks to divide it among four patients and then using plastic sheets to make "isolation tents". This was done in a single-room health center.

Rural doctors have also been affected by the pandemic. Many complaints were received by Ecuador's National Association of Rural Doctors in 2020 and 2021 about delayed salaries. Some of these payments were more than three months late. FarfA!n, who was a former president of the association, says that there were many rural health-care workers who were threatened by their landlords and were about to be expelled.

Remote health care outposts can only provide primary care, even in better conditions. Any serious condition must be referred to the district hospital. In Hoja Blanca's instance, this means that the 300-mile round trip to BorbA3n is required.

The Ecuadorian geography and culture was considered by the health administration. Rural infrastructure was not well-developed. In 2012, however, the government restructured it into nine coordination areas that are not geographically oriented.

Fernando Sacoto is president of the Ecuadorian Society of Public Health. "This isn't just a matter of bureaucracy; it has certainly had an impact on many peoples' health."

Ortiz-Prado says that there have been some significant changes in the health-care industry over the past 15 years, including universal coverage and an investment of $16 billion in public health between 2007 and 2016. However, the focus was mostly on building hospitals. He adds that the leadership of the country "didn’t pay enough attention" to primary and preventive health care. "The system wasn't designed to prevent disease, but to treat them."

The government also demolished Ecuador's Dr. Leopoldo Izquieta PA (c)rez National Institute of Hygiene and Tropical Medicine aEUR", which was responsible for emerging disease research, surveillance, and vaccine production. It was replaced by smaller regulatory bodies, with one failing completely according to Sacoto. A large number of national laboratories were also shut down. Experts agree with Sacoto that the government should have continued to invest in the Institute instead of tearing it down. This would have helped lessen the impact of the pandemic in Ecuador.

Initial plans to trace COVID-19 victims fell apart. There were no machines in the country to process the PCR tests, which are the gold-standard COVID-19 tests. Sacoto says that samples taken in Guayaquil during the pandemic were transported by taxi to Quito, where PCR tests could be performed. Public transportation is not available in rural areas, so test results can sometimes take up to two weeks.

Topa Pila's team attempts to convince anyone they meet with, aEUR", the butcher's spouse, people waiting for buses, and men at the cockfighting venue, aEUR", to take a COVID-19 testing. Although the PCR results are now faster than ever, it still takes a week because one of the health-care workers must personally transport the samples to BorbA3n. This is a three-day roundtrip that requires a motorcycle, two buses and crossing a river with an unreliable ferry. "We had COVID-19 quick tests up until yesterday. Topa Pila says that today, the district leader passed all of the tests. She adds that the district hospital requested rapid tests because they "have run out of tests" and they needed them.

Hoja Blanca's isolation has meant that there have been very few COVID-19 patients in the community, and they were all mild. Topa Pila is afraid of having patients in critical conditions, COVID-19 and otherwise. All she can do to help the patients is ask the ferry operator and villager for transport assistance. There are no ambulances. She says, "We don’t have oxygen because we have an expired tank over there and it can’t be used anymore." "We have asked for a replacement, but nothing has been done."

Topa Pila believes it is a lot to expect of inexperienced health-care workers working on their aA+ rural. She recalls that the previous team had left before she arrived in Hoja Blanca. "We start at zero, without knowing anything every single year." She says, "And all those patients who have had their treatment supervised for one year by a doctor lose their treatments because they knew that the doctor would visit their home." "We arrive without knowing where they live. As you can see, there are no addresses in this area. She adds that the COVID-19 pandemic has made it harder for rural doctors to reach their patients. Other health issues such as childhood vaccinations were delayed due to the lockdowns or the coronavirus.

Like in other Latin American countries, corruption was allowed to flourish in Ecuador's COVID-19 crisis. Sacoto claims that the health-care industry has become a "bargaining tool" for politicians. He says that there are "mafias" embedded in public procurement because it is so complicated that only those who understand the fine print will benefit. Between March 2020 and November 2020, the country’s Attorney General reported 196 corruption cases in relation to the COVID-19 pandemic. These included allegations of embezzlement, inflated prices for medical supplies, and other allegations.

There have been some signs of improvement in recent months. The government of Guillermo Lasso took office in May 2021. They have accelerated COVID-19 vaccinations, approved a new program for children's malnutrition, and announced a Ten Year Health Plan to improve equity.

Sacoto states that he is skeptical about whether these plans will lead to tangible and long-lasting actions. He suggests that a good place to start is decentralizing health-care systems by creating more rural clinics. This could help build a network of preventative care for everything, from childhood malnutrition and future pandemics. Ortiz-Prado believes the country needs to better integrate its disparate health-care systems in order to make it easier for patients and their records to be moved between them when necessary. FarfA!n states that the country must improve the working conditions of rural health-care workers and their salaries to make it more attractive, as well as create more permanent positions that are focused on rural communities.

He says there is "lack of concern, budget," and adds, "It's an inextricable circle and unfortunately, governments are trying band-aid solutions for the health problems here."

All of this is possible in the future. The lights are back on at the Hoja Blanca hospital in less than one day. The vaccines stored in the refrigerator are safe. The 52 COVID-19 test results are still at risk. A health care worker must bring the cooler to BorbA3n. Although heavy rains were reported the night before, the river ferry has not been able to reopen operations due to the fact that water levels have not dropped sufficiently. This is just the first leg of a 13-hour journey. The icepacks are melting quickly in the balmy equatorial heat.

This story first appeared in Undark, an independent, non-profit digital magazine that explores the intersection of science, society. Kata KarA!th, a freelance journalist and documentary filmmaker based in Ecuador, covers science, environment and indigenous issues.