Last night Yolanda Díaz turned the launch of her Sumar platform into a mass act in the Plaza del Matadero in Madrid, overwhelmed by the more than 5,000 people who attended, in an environment in which the leading role –in addition to that of the obvious protagonist, Of course – it was for social activism, trade unionism and civil society organizations. 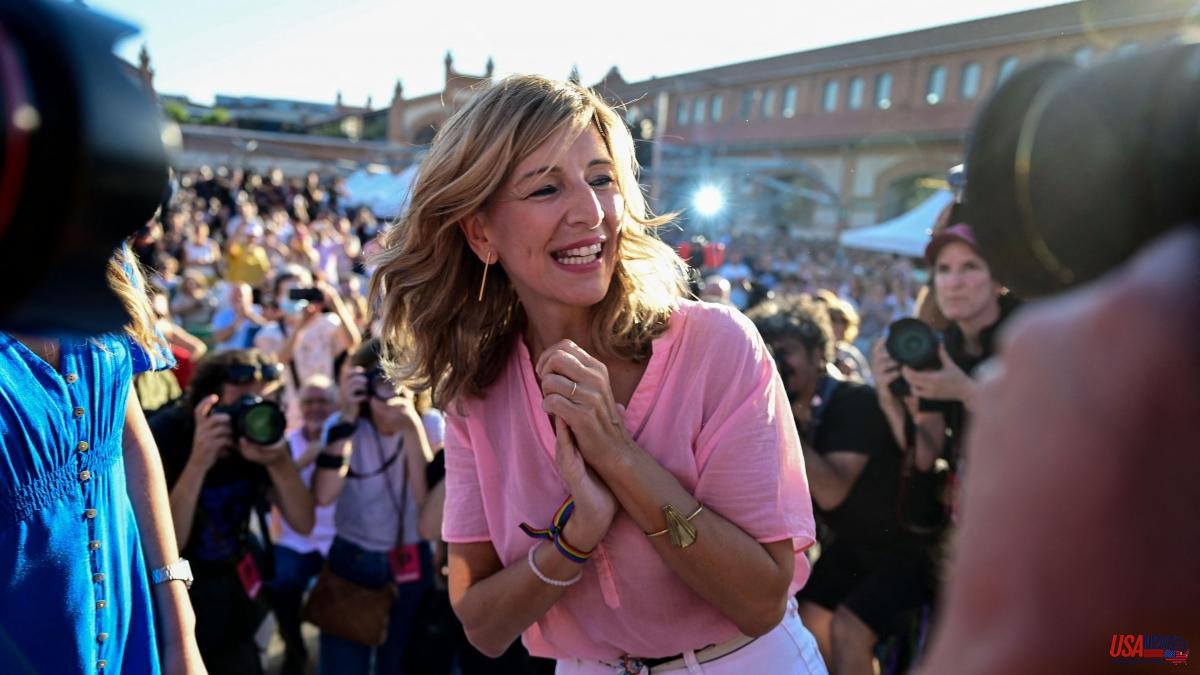 Last night Yolanda Díaz turned the launch of her Sumar platform into a mass act in the Plaza del Matadero in Madrid, overwhelmed by the more than 5,000 people who attended, in an environment in which the leading role –in addition to that of the obvious protagonist, Of course – it was for social activism, trade unionism and civil society organizations. Díaz, in any case, emphasized citizen participation during the tour of the listening process that is now beginning and that should lead, he explained, to the elaboration of "a new social contract for a country of the 21st century" with which " win the next decade.

Díaz's speech –microphone in hand in a horizontal setting inspired by that of the recent Podemos– went through some of the civilizational challenges that Spain and Europe face, linked to the environment, social justice, respect for human rights –there was an allusion to the tragedy of Melilla–, the strengthening of public education and health, the recovery and conquest of social and labor rights, and focused on redistributive justice and the need to adjust the fiscal model so that it contributes to combating inequality instead of to harass her "Democracy has to get to taxes." The care with which he alluded to taxation reveals that the PSOE's resignation of the ambitious tax reform that it had committed to both in the investiture and in the coalition pact has not gone unnoticed by the second vice president, and that now the Socialists have decided to postpone due to economic uncertainty. “A country in which large corporations with a turnover of more than one billion euros pay taxes at 3.8% is not a fair country,” she said. That socialist resignation to the tax reform, it was clear last night, will be fuel for the electoral struggle.

He also wanted the speech to be pro-European. He quoted economist Thomas Piketty: "Because we love Europe we want to change it." And without alluding to NATO, the war in Ukraine or military spending, he spoke of a continent that must fight the warmongering rage, "a Europe that has to talk about peace and seek peace." A Europe, he added, that must say “never again to austerity rules”.

He declared himself in rebellion against political disaffection from a populist-inspired rhetoric, claiming a new policy built from the bottom up, because, he assured, "politics is about simple things: quality public health, quality public schools, to have a decent salary and a decent job and that we can afford decent housing; This is what politics is about." In this key, Díaz led an act inspired by Errejonism -vocationally transversal-, but with a marked labor character: up to five of the participants in the act were linked to the defense of labor rights both in the public sector and in that of the new technologies and platforms. Several times the exhortation “you have to join a union” was heard during the speeches that opened the event.

Because the presentation began with the participation of a succession of activists linked to the fight against climate change, digital entrepreneurship, the unionism of the riders or the workers of the new technological giants, the defense of public compulsory and university education, or the trade unionism of strongly feminized and racialized labor sectors, such as cleaning or care, to finally close with an intervention in defense of public health and mental health as a problem, the latter also derived from the material conditions and prevailing social

In the act there were no first swords of the parties that, sooner or later, will be concerned by Díaz's platform, but there were figures of those formations such as the autonomous deputy of United We Can Agustín Moreno, the former coordinator of IU Gaspar Llamazares, the co-founder of Podemos Juan Carlos Monedero or the MEPs of the United Podemos group Ernest Urtasun and María Eugenia Rodríguez Palop, among others.

In the case of an event with a superficial political content, as corresponds to the presentation of a citizen action platform –Díaz repeated over and over again “the leading role is yours”, “Sumar is not about parties, nor about acronyms, it is about collective thought ”–, what was significant was the tone with which Díaz wrapped the act, almost the opposite of what was seen in the last campaigns of United We Can: against the defensive resistance of 2019, when the confluence tried to survive the endless harassment and the schism , the vice president impregnated her speech with positive emotions and an inclusive vocation. “Someone has to take care of hope,” she said, quoting Manuel Rivas, “we are not resigned, the rights do not have to govern. Adding is not about resignation, it's about joy, it's about hope. She alluded to these emotions several times, basing herself on her conviction that there is a Spain that "does not resign itself to the rule of the right: we do not resign ourselves," she proclaimed. "That's why I'm going to tour all of Spain and I'm not going to talk, I'm going to listen to you. The time has come for you to take a step forward.”

There was an air of reunion among the attendees, many of the same ones who saw the birth of Podemos or camped out in Sol, today battered by the bloody process of this ferocious decade. Crow's feet and excited looks at the new artifact, more solid than a cupcake and less resounding than shepherd's crumbs.