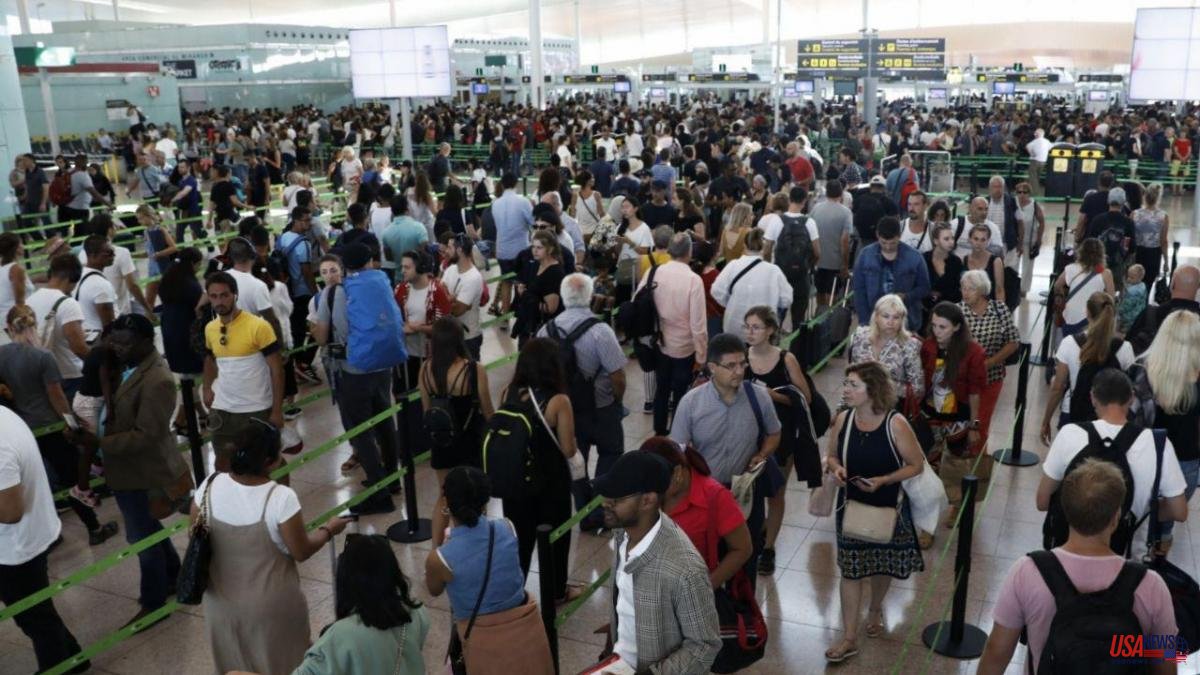 Long queues at security and passport controls, delays, cancellation of flights, missed connections... The situation that the main Spanish airports are experiencing these days may be exceptional, as the Government has pointed out, which has undertaken measures to provide of more agents the installations. Although the arrival of summer and the good expectations announced last Friday by Aena, manager of Spanish airports, can make the exceptionality become the norm at times.

What should you do if, despite arriving at the airport on time, the long queues make you arrive too late at the boarding gate? What if you lose a link at a passport control with long queues? What if in either of these two cases the suitcases have traveled? Because to the most common problems of overbooking and loss of luggage are added these days - and predictably during the summer campaign - new concerns for users of Spanish airports.

In the event of missing a flight due to delays in controls at Spanish airports, the one we must ask for responsibility is Aena as the manager of the facilities. In fact, as Enrique García, spokesman for the OCU, reminds us, all users pay an airport tax with their ticket that must guarantee the correct use of all common services. Among them, those provided by agents of the National Police and the Civil Guard, whose operations are part of airport logistics.

"It is unacceptable that someone who has a flight at 6 in the morning these days has to sleep at the airport, because when someone accesses the facility as a user, they are already paying to receive an efficient service," he explains. Therefore, his first recommendation is to comply with the airline's recommended time-advance advice and try to document it. To do this, it is enough to keep a taxi bill or any public transport bill where the service time appears, activate the geolocation provided by the different mobile devices or even take a photo next to one of the clocks in the installation itself. “It is the first step to be able to claim”, explains García.

Although it is also convenient to claim the airline, which will transfer the claim to the manager and can even resolve it on its own and ask for accounts afterwards. In fact, it is obliged to do so if due to a delay, whatever the cause, a passenger misses a connection.

“We are seeing a situation that is completely exceptional and it is not an isolated event, the companies themselves denounce it, it has been appearing recurrently in the media... we could even say that we are facing an event of force majeure and that any of the claims that we can make gain even more strength, ”says its director of operations, Ana Rodríguez, from the Reclamador platform.

In this case, it would also be necessary to document this exceptionality through news links or press clippings and add it to the claim, which must always be made in writing and Rodríguez also advises addressing it to both Aena and the airline. It is no longer just the cost of missing a flight, but all the associated expenses that it entails, including those that can be considered moral damages.

“Those affected by a situation of this type can demand to be taken to their final destination or can request a refund for the ticket. In addition, if the passenger had to spend the night until the departure of the new flight, Aena or the airline will have to offer them accommodation to spend the night and bear the cost of their meals. So you always have to keep all the receipts of the expenses to be able to claim them later, ”advises the director of operations of Reclaimer, which these days manages a huge number of claims.

If the claim does not work, there is always the legal route. In these cases, the OCU spokesman advises calculating their costs, since there are abbreviated procedures in which it is not necessary to have a lawyer and attorney. “And, above all, seek advice,” insists García.