White Jacket, a solution designed to improve the mobility of people with visual disabilities

Vision is one of the most important senses that every human being possesses and the one that is most used during the day. 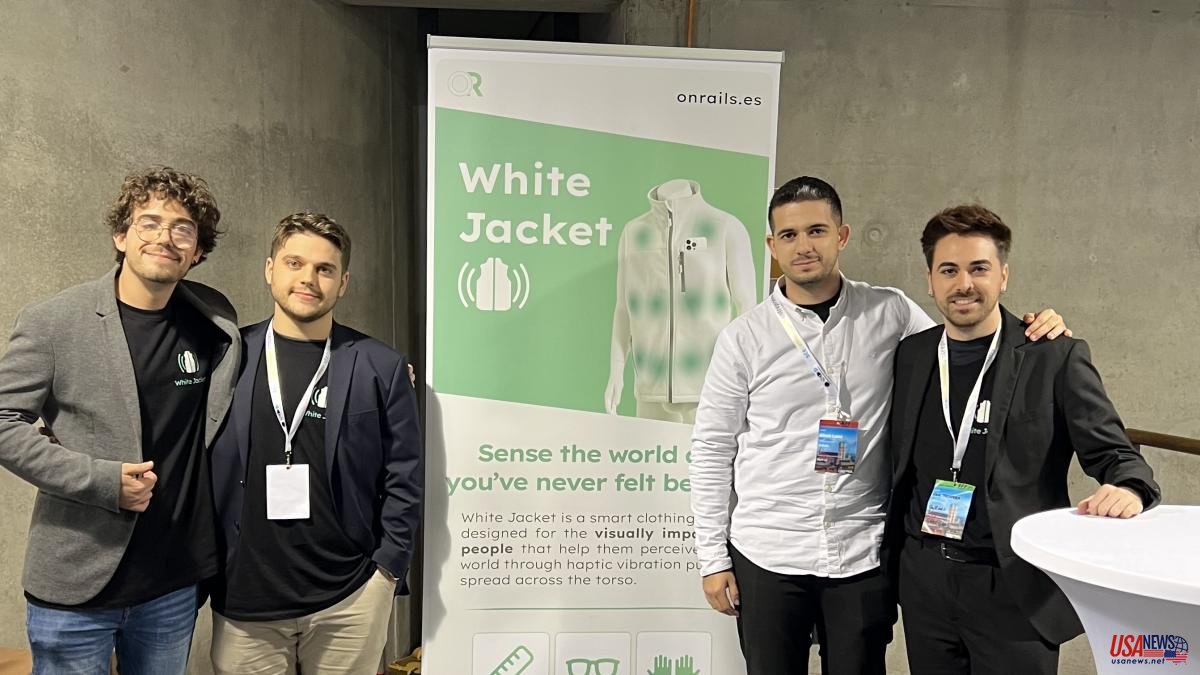 Vision is one of the most important senses that every human being possesses and the one that is most used during the day. 80% of the information our brain receives is through our eyes, since vision allows us to connect with our environment and keep us safe.

According to the National Institute of Statistics (INE), at least 2,200 million people in the world suffer from some type of visual conditioning that leads to disability and even blindness. When analyzing the percentage of people with visual impairment by country, vision loss is increasingly common among Spaniards: 6.2% of the population suffers from some type of visual impairment.

For those people who suffer a decrease in their visual capacity, both partial and absolute, new technologies can mean a great change in their day to day. Recent technological advances could allow people with reduced visibility to read a restaurant menu, go to the supermarket or move freely around the city without the need for traditional assistive tools. However, existing innovative solutions only work at an academic level and not as a commercial product designed for the user.

The OnRails team, made up of five students from the TecnoCampus in Mataró, has as its main objective to improve people's quality of life through the technology it develops. “Not only do we strive to create products that meet a specific need and are functional, but we also make sure that the user experience is great every time,” explains CEO Albert Loma. “We strive to understand our users' needs and create solutions that exceed their expectations,” he says. “We take pride in being able to positively contribute to people's lives through our work,” he adds.

Albert Loma, Eric Fradera, Aitor García, Jan Cano and Xavier Torino are the founding partners of this project. All of them are graduates in Computer Engineering and Video Game Design at TecnoCampus, except Torino, who has a more analytical profile in the field of Business, Marketing, and Innovation, and is a graduate of Pompeu Fabra University.

“OnRails is a team that was formed more than 4 years ago carrying out university projects and that has been consolidating over time”, explains Loma. “The first great achievement as a team and that gave us our name was winning the SomHackathon Tecnocampus 2020 with a platform to guarantee active ageing”, he recounts. “In this second half of the year we decided to start the White Jacket project, with which we have gained access to one of the most important European programs for start-ups in Europe called Start For Future, in addition to achieving a co-incubation between TecnoCampus and Strascheg Center for Entrepreneurship in Munich”, he adds.

White Jacket is an e-textile, or smart fabric, that incorporates technology into a conventional piece of clothing to improve the user's perception of the environment. This fabric has haptic motors that transmit spatial information in the form of modular vibrations throughout the torso. This perception of the environment is achieved thanks to advanced augmented reality technology that scans the space quickly and accurately.

“The origin of the idea comes from a project proposed as a Final Degree Project that obtained excellent results and where considerable potential was observed after an in-depth study of the value proposition”, explains Loma. “White Jacket addresses the biggest challenge facing a visually impaired person: autonomous movement,” she relates. “There is a great danger especially if you are dealing with unknown areas,” she adds.

For this, historically we have two indispensable tools that facilitate navigation: the white cane and the guide dog. "Based on personal experiences reported by people who use these tools on a daily basis, a need was detected that is currently not covered," reveals Loma. “This need is the detection of obstacles above waist level, since unavoidable accidents often occur due to obstacles placed at that level,” she explains.

Building on that discovery, the team reviewed available technologies. “It was then that Augmented Reality was chosen as a detection technology, since it has evolved at great speed in recent years, and by exploring its limits it can be applied in a multitude of environments”, explains Loma. “To combine this technology with a product requires a spatial information transmission technology that is natural and non-intrusive,” he explains. “This led to the incorporation of haptic vibration as an environment informant,” he concludes.

“In addition, the device is fully configurable by the user thanks to a mobile application available for iOS and Android”, reveals the CEO. “The mobile application will receive constant updates and optional subscription services will be offered that will add extra functionality for those users who want to get the most out of the White Jacket platform” he adds.

On November 24, the Entrepreneurship Night was held at the TecnoCampus in Mataró. The event welcomed some 300 people and included as a novelty the first edition of the Antena TrenLab awards.

During the evening, the OnRails team won the Creatic Award for University Entrepreneurship. The prize included an economic bonus of 1,000 euros, participation in an international event, a TecnoCampus entrepreneurship training program, and accommodation in the TecnoCampus pre-incubator for 1 year.

“We are going to invest the prize in continuing to evolve the technology for detecting and transmitting environmental information, developing new technologies, using new sensors, and combining it all in new prototypes that redefine our standards of reliability and quality,” says Loma. “In addition, a part of the prize will go towards carrying out new testing sessions, with people with severe visual impairment, who will test the new prototypes and provide essential feedback to evolve the product”, she adds.

"We are currently closing an investment round with which we intend to continue developing the project until we have a commercial version," explains the CEO. “We have several working prototypes, but technology changes rapidly and we are continually researching to be able to offer the best possible product,” concludes Loma.