White apotheosis in Madrid for the celebration of the fourteenth Champions

The streets of Madrid were once again decked out in white to welcome Real Madrid. 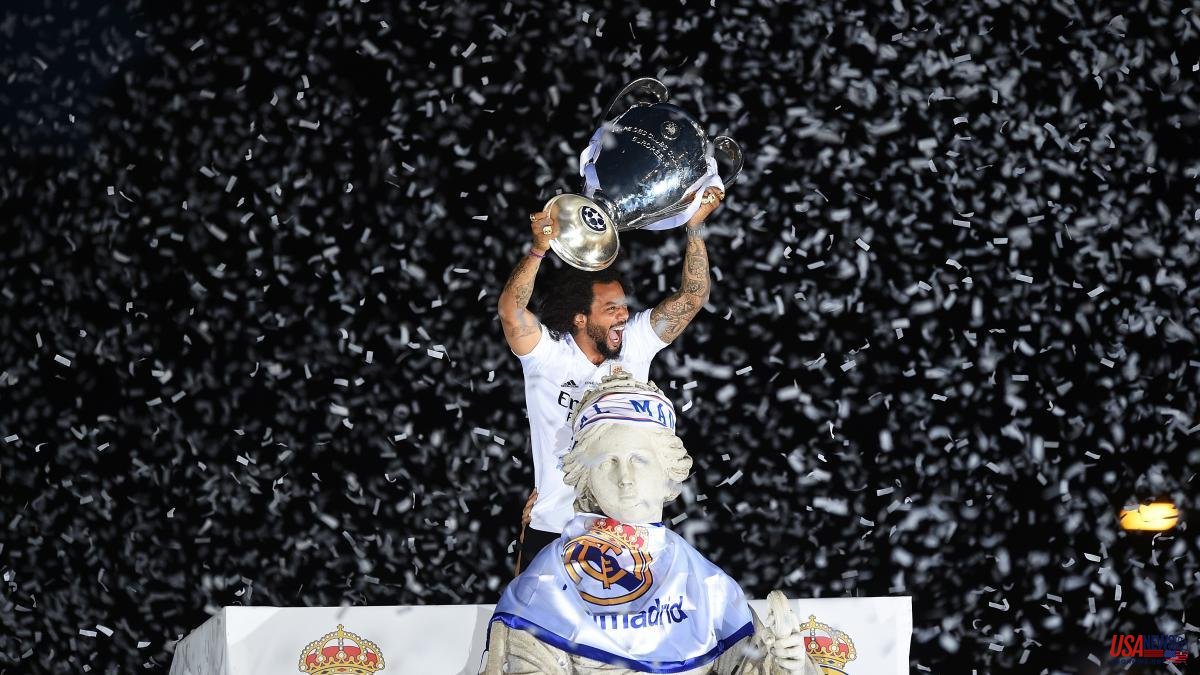 The streets of Madrid were once again decked out in white to welcome Real Madrid. The Madridista players, aboard a bus, triumphantly walked through the center of the Spanish capital with the Champions League in their hands, the fourteenth in its history, which was the main attraction for the thousands of attendees who followed the parade from start to finish. final at the Santiago Bernabeu.

Before stepping onto the lawn of the Madrid Coliseum, the players, as is tradition, offered the trophy at the Almudena Cathedral, the headquarters of the Community of Madrid, the capital's City Hall and finally they were presented to the fans in Plaza Cibeles , the usual place for merengue celebrations, where the soccer players climbed on the sculpture of the goddess on a platform prepared for the occasion.

The bus left the Bernabeu escorted by the police until it reached the Almudena Cathedral and at all times they were followed by hundreds of fans who crowded behind the security cordon. The president of the club, Florentino Pérez, led the Real Madrid expedition, which arrived at 6:35 p.m., 20 minutes behind schedule, with the sound of bells in the background.

They were received by the Archbishop of Madrid, Cardinal Carlos Osoro, as well as the Cathedral Chapter. Then it was the turn of the Community headquarters, where the president, Isabel Díaz Ayuso, received them at about 7:15 p.m. "The best team in the world is Spanish and from Madrid. It is taking the name of our city all over the planet", the leader was proud.

The last institutional act, starting at 8:25 p.m., was at the Town Hall. Together with Begoña Villacís, deputy mayor of the city, José Luis Martínez-Almeida, who is declared an Atlético de Madrid fan, hosted the white delegation in an act where the mayor spoke and again Florentino Pérez. "Of the last eight finals you've played, you've won all eight. How complicated you make it for those of us who aren't from Real Madrid. This European Cup will remain in the memory of all Real Madrid fans because of what all the qualifiers have meant", the mayor said.

After the visit to the town hall, the Madridista bus headed for Cíbeles. There, starting at 9:45 p.m., all the players were acclaimed. A platform and a stage with a giant screen were set up around the sculpture, as in the recent celebration of the league title, and the players and coaching staff got off the bus one by one accompanied by chants of “Champions, champions! ”.

Especially acclaimed was Marcelo, captain of the team and player with the most titles in history (25) who will cease to be a white player next season when his contract ends on June 30. The Brazilian put the Madrid scarf on the goddess, a common image in the team's title celebrations.

The footballers each received their mass bath while they passed the Champions League trophy. The microphone was also rotated among the players and some responded to the chants of the fans with some words, such as Hazard, Toni Kroos, Thibaut Courtois, Casemiro, Dani Carvajal, Rodrygo and Benzema. Finally, around 10 pm, the Madrid squad headed to the Bernabeu.

The Whites' apotheosis reached its peak at the Madrid Coliseum, where the players were presented one by one with a show of music and colours. Once in the center of the field, on the prepared stage, coach Ancelotti took the floor, highlighting the comebacks at the Bernabeu, and finally Marcelo spoke, who tearfully confirmed his goodbye to Madrid in front of a packed and dedicated grandstand.