What does digitization require? Cooperation and agility to reach open innovation

Companies, startups, institutions and universities must join hands to improve the competitiveness of the Valencian economy. 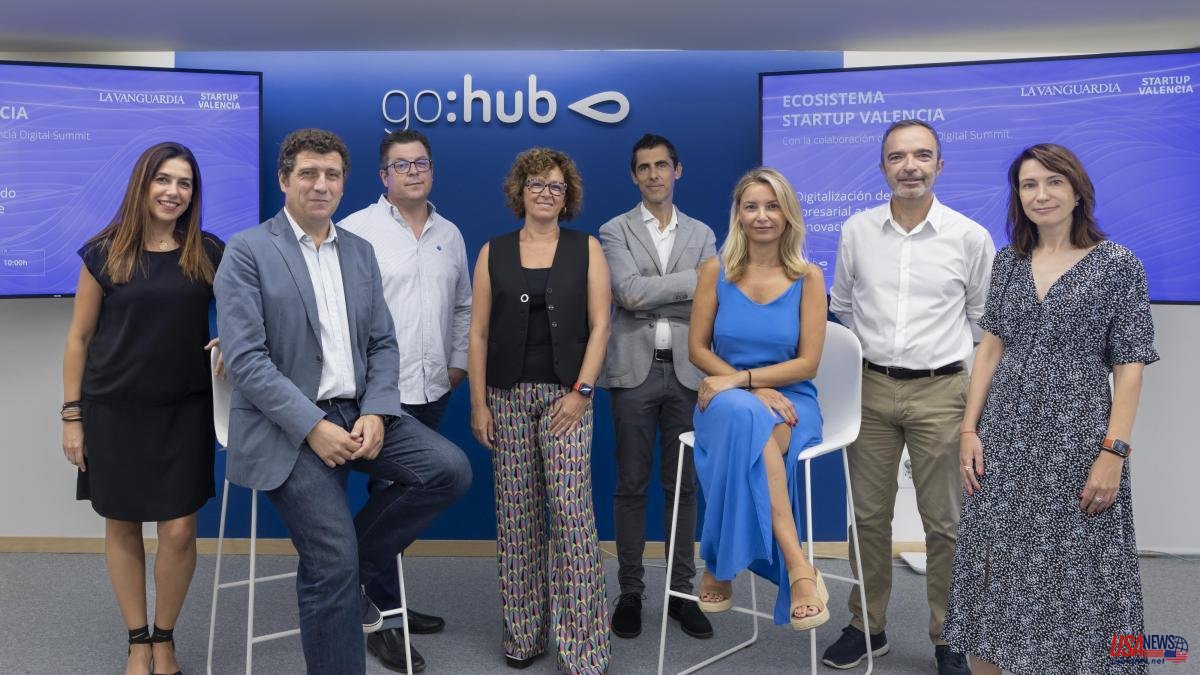 Companies, startups, institutions and universities must join hands to improve the competitiveness of the Valencian economy. This is one of the ambitious conclusions reached last Monday by the debate Digitizing the business fabric through open innovation, held at the offices of GoHub Ventures, Global Omnium's corporate investment fund.

The new face-to-face meeting of Diálogos La Vanguardia in Valencia hosted a debate in which Josefina Bueno, Minister of Innovation, Universities, Science and Digital Society participated; Esther Gómez, vice-rector of the Polytechnic University of Valencia (UPV); Nacho Mas, CEO of Startup Valencia; Patricia Pastor, CEO of GoHub Ventures; Joaquín del Río, Director of Innovation and Quality at Vicky Foods; Vicent Albert Revert, Director of Product and Technology at Jeanología and Eva Giner, Director of Innovation at SPB. It was moderated by Salvador Enguix, delegate of La Vanguardia in the Valencian Community.

It promoted the Startup Valencia event, the association that brings together more than 300 startups from the Valencian Community and whose CEO asked for a plus of cooperation between the business fabric so that "innovation is truly open". Minister Josefina Bueno listened attentively to him, who valued the collaborative work carried out from the science parks, "an example that it is also possible to collaborate in that change of mentality that is needed to promote innovation".

Bueno affirmed that these are "a link between the people who leave the universities and the companies" and assumed that it is necessary to continue working in this line from the Valencian Government. "Digitization does not have to remain in the business fabric because if it does not reach everyone, we will have failed," he added.

The new Science Law or the improvement of the doctoral program are tools that, according to the minister, allow innovation to leave the theoretical framework and also land in the business fabric, as an element in addition to territorial cohesion, which she emphasized.

“For example, without the Miguel Hernández University of Alicante and the Jaume I University of Castellón, the economic progress of the two provinces would not be understood, because both create nodes, draw talent and advise”, he argued.

Likewise, he defended that "the authorities have to focus on making companies see the return they will have when they make that (necessary) investment in digitization." Next to him, Joaquín del Río added that “what you don't see and costs you an investment, you still don't undertake, but that's where we have to accompany companies”.

On the resistance to digital transformation, Patricia Pastor pointed out how Global Omnium developed it for a decade, not without obstacles: "Spending ten years facing a conservative mentality within your own company is not easy," she summarized. But the executive maintained that “there has to be a greater growth in the percentage of digitization in this country” and alluded to the passage from 8 to 30% of digitized companies that there has been after the pandemic, a figure that “is not enough.”

Pastor also assured that companies have to be "in a constant transformation to be always alert", and that means innovating, but also "being close to those who are creating innovation, because this is a two-way path".

For his part, from Jeanology, Vicent Albert Revert argued that "indoor digitization is well established, but the client needs time to believe in the changes." And on this, Eva Giner added that in this process of conviction it is also important to disclose that digitization is "a source of growth and also of internal efficiency", although she believed that the problem is that "we never know how far you go and how to exploit it" .

Likewise, for large corporations such as Vicky Foods, a company in the agri-food sector, innovation "is either open or it is almost non-innovative, because skills and knowledge are transmitted quickly and if you do not follow them, you are left behind," he warned. its director of Innovation and Quality, who believed that the "appropriate ecosystem" is one in which companies, technology centers, universities and administrations participate.

However, Del Río defended that "at the individual level a lot is being done, but we lack the common work that makes us transfer knowledge to enrich each other."

Among the current tools that are available to the fabric, the Minister Josefina Bueno alluded to the improvement of the connection with the industrial estates, "they are given better connectivity with the idea of ​​structuring the territory". She also presented the idea of ​​improving the training of senior talent, "we have to influence that area," she said.

Another proposal was launched by the director of Innovation and Quality of the agri-food company Vicky Foods, who showed his interest in having teaching stays in companies: "It would help us a lot, but it is true that the bureaucracy makes it a bit difficult".

The lack of agility in the administration was a constant 'but' in the interventions of the speakers, although most highlighted that progress has been made in recent years. This was the case of Vicent Albert Revert, who recognized that "with the University it is true that it has improved a lot because before you had to coincide with their research, but now they can be adapted to your needs because they see that collaboration is necessary." Where he cited less experience was with startups, "a formula to explore because sometimes going alone means going faster, but if you are accompanied, you go further."

In this regard, Nacho Mas assured that in the Valencian Community, venture capital funds are already investing in the entrepreneurial ecosystem, but “here we are missing out because of the mentality. We need more investors from the territory.”

Finally, Salvador Enguix asked the speakers about the urgencies they observe and the balance was as hegemonic as it was enriching: from the capillarity of digitization that the minister Josefina Bueno yearns for, passing through the demonstration that "digitization is profitable" by Eva Gómez .

Likewise, Vicent Albert Revert highlighted that this is "the means to be competitive" while Joaquín del Río advocated the enhancement of the ecosystem and Eva Giner for "the dissemination of benefits", while Nacho Mas urged to make more visible the successes "to be an example" of what is being done in the Valencian Community.